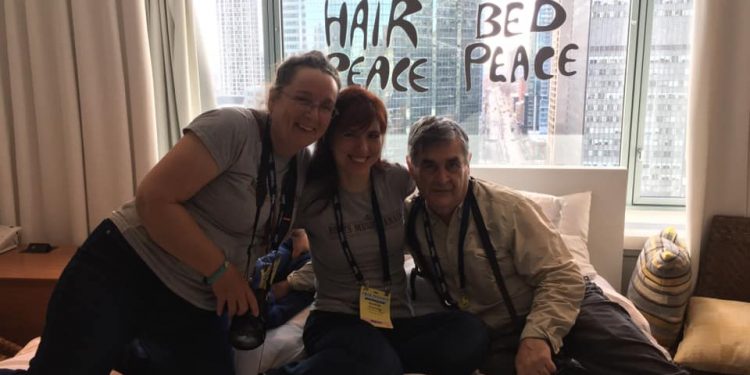 This woman is the second coming of Aretha Franklin, and “The Devil is a Blue-Eyed Man” is 2019’s “Natural Woman” – only instead of a love song, it’s a toast to fatal attractions. On stage, she manages to be both charismatic as all get-out and as vulnerable, genuine and likable as your over-sharing best friend. I can’t wait until she’s massive and we’re all sitting around saying “we saw her when.”

Favourite new song that hasn’t even been recorded yet:  Kalon Hart – “There is a River”

Kalon sang this at a showcase at the Folk Music Ontario conference, and I swear every hair on my body stood on end.  The melody is utterly unique, and the moving lyrics speak in metaphorical terms of a man wanting to break down his own inner defenses so he can allow himself to fall in love. Kalon, until now best known as Rob Teehan, formerly the tuba player for the Lemon Bucket Orkestra, has a stunningly beautiful and resonant voice that communicates every ounce of the longing he writes about.  Hurry up and record this, Rob.

Favourite album that I never expected to like as much as I did:  OKAN – Sombras

Alex Cuba used to talk about how the complexity of Cuban arrangements was masking its soul, and I could totally feel him on this. A lot of Latin jazz just fails to grab me on an emotional level for precisely that reason, especially if it’s technically complex. But OKAN’s Elizabeth Rodriguez sings with such full-throated abandon and interminable joy that her passion easily matches the ultra-sophisticated playing of her ensemble – in which she also plays some killer violin solos.

Coco walked on stage for her headlining slot with nothing but a ukulele for accompaniment and didn’t even bother playing that for the first song. Instead, she launched into an a cappella spiritual number and got the whole crowd of 500 or so clapping along.  She proceeded to hold us riveted while she sang, played and scatted her way through a set influenced by jazz, blues, soul, gospel and pop music before closing the show with “Tiny Lights,” during which an enthusiastic audience sang along and flicked lighters. It was a perfect set.

If you spend any time around the industry side of music, it’s easy to get disillusioned. At its best, music is about art, friendship and community. But the moment you try earning money at it, it inescapably also becomes about the schmooze, the hustle, and the competition. This year at Folk Music Ontario, I’d spent a few too many hours reviewing shows and not enough time enjoying the friendship and fellowship of my colleagues. Seeing Corin sing this song – a celebration of the life of the working musician who ISN’T out to be the next big thing – snapped me out of it and reminded me why we all do this thing.  Thanks, Corin. I needed that.

The Bed-In for Peace at the Folk Alliance International conference

This year, the Folk Alliance International conference was held at the Fairmont Queen Elizabeth in Montreal, which, 50 years prior, was the site of John Lennon and Yoko Ono’s famous bed-in for peace. To mark the anniversary, FAI invited a cross-section of artists to pile onto the bed in the Lennon/Ono suite and sing “Give Peace a Chance” before an internet audience of thousands. That alone was good fun.  But the impromptu sing-a-long that took place afterwards and carried on for a half hour was the kind of communal celebration that folk music is all about.

Interviewing Folk Roots Radio host and YouTube star (can we call her that?) Jan Hall for a profile related to her winning the Estelle Klein Award.

I didn’t know Jan well before I interviewed her for Roots Music Canada, so it was delightful to discover that she is a warm, lovely person who is also something of an inspiration. Her role as a tireless promoter of folk music evolved out of a great deal of personal loss, which makes her triumphant receipt of FMO’s lifetime achievement award all the sweeter.

The Kitchen Party at the Moose n’ Fiddle Festival

Back when I lived in Ottawa, I occasionally joined countless other “non singers” and a few amateur singers for old-school song circles – the kind where people gather in living rooms, break out old song books and sing classics like “The Skye Boat Song” and “Northwest Passage” together for the sheer joy of it. I remember talking to a folklorist in the group who lamented that singing had become “professionalized” and argued that that was antithetical to the idea of folk as “the people’s music.”  Hats off then to the Moose n’ Fiddle Festival for giving it back to the people in fine form.  They kicked off their Saturday show by inviting four of what you might call the “non marquee acts” at the festival to host a sing-along for the crowd.  And yeah, you better believe we sang “Northwest Passage.”

First of all, the simple nostalgia of seeing Jimmy singing some of the old Rankin Family stuff was worth the price of admission – figuratively speaking – on its own.  Secondly, seeing Jimmy sing live without the sweet-as-the-mountain-air harmonies of his sisters gave me a whole new appreciation for just how beautiful an instrument Jimmy himself possesses.  But seeing Jimmy sing this song from his new album – a sometimes angry, sometimes mournful lament for the Cape Breton routes that claimed the life of his brother, John Morris – was nothing short of extremely moving.

This rip-roaring New Orleans-style brass band from Winnipeg blew the lid off the showcase room and had the audience on its feet.  I don’t know how many promoters out there can afford a nine-piece band, but I sure hope these guys make it on the road.  They’re too much fun to miss.

Daniel’s musical exploration of the European influences on Caribbean music was one of my first big discoveries after I restarted Roots Music Canada, and this was my first chance to see him perform it live. I was not disappointed.  Daniel’s huge smile and joyful energy as a bandleader was absolutely infectious.

The Dardanelles at Folk Alliance

Everything about this Newfoundland traditional band is out of this world.  They play fast-paced instrumentals with unadulterated joy and enthusiasm.  Singer Matthew Byrne sings heart-rending ballads in a voice that is nothing short of breathtaking, and of course, they’re Newfoundlanders, so they’re also hilarious.  The Dardanelles is what Tom Power does when he’s not hosting CBC q, and if you think he can host on the radio, damn, you should see him on stage.