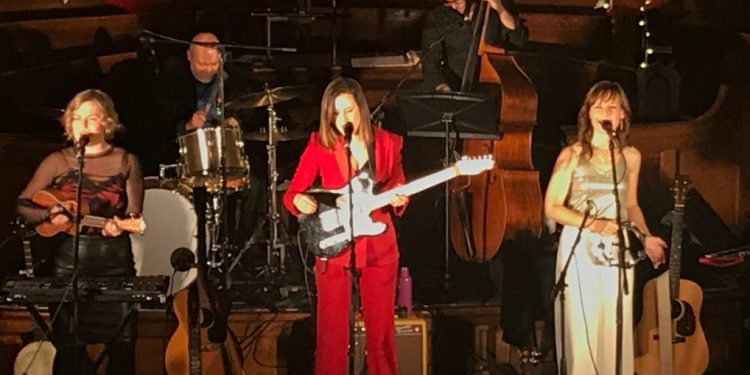 The Dublin Street United Church sits nestled among beautiful century homes on a tree-lined street on the edge of downtown Guelph. Last Saturday evening while cars swished by on slushy streets a merry crowd of revelers gathered on the city sidewalks out front, eventually forming a line that stretched around the corner and through the parking lot. Anticipation helped keep the evening’s winter chill at bay as people eagerly awaited the opening of the large wooden doors. The occasion? The Guelph stop on The Good Lovelies Christmas tour.

Those fortunate enough to snap up tickets to the Juno Award-winning trio’s sold-out Guelph appearance arrived early in order to secure the very best seat to the general admission concert. Several, including ourselves, have made the annual event a holiday tradition and bring more friends each year.

As the church doors swung open, we ushered ourselves inside to savour the warmth of the venue, its four Christmas trees adorned with twinkling lights that perfectly set the mood for the evening.

To their credit The Good Lovelies (Caroline Brooks, Kerri Ough and Sue Passmore) put their fans before their pocket books and restricted the ticket sales to this year’s show so that every one of us could find a good seat and enjoy an evening of live music. It was literally standing room only during last year’s concert.

Observing from the front row of the balcony I could really appreciate the intimacy of the Dublin Street church, which makes it an ideal setting for a concert. The performers look, and perhaps feel, as though they’re being held in the arms of the audience as the balcony wraps around them on three sides. The acoustics are wonderful, and I’ve never seen a bad show here.

The hustle and bustle of the audience hushed as the lights dimmed and the pianist, drummer and bassist took the stage and began to play the intro. The church burst with applause as the trio filed in, Caroline Brooks sporting a stunning bright red suit, transforming herself into the embodiment of everything great about this season and being totally rock and roll at the same time. Well played Caroline!

From the very first note they sang, the caused the hearts of any grinch in the crowd to grow a few sizes bigger. The evening seemed to fly by as the artists performed two incredible sets of both traditional and original music. And it wasn’t just Christmas music. They treated their adoring fans to the mega hit and amazingly mesmerizing “I See Gold,” as well as the catchy uptempo “Take Me, Take Me.”

The evening’s highlights were many: a fantastic rendition of “Little Saint Nick” that I preferred to the Beach Boys’; “Toyland” featuring actual toys as percussive instruments – again, we’ll played!; the poignant and timely “Song of the Magi” immediately followed by the subtly political “You Don’t Have To Be A Santa Claus”; and the enthusiastic audience, eyes and smiling faces reflecting the Christmas lights, attempting to keep up with the increasingly fast-paced Jing-a-ling-a-ling before the six-piece band took its intermission.

Now all toasty inside, warmed from the top of their heads to the tips of their toes by the amazing first set, the audience members nestled in for the second. And what a set it was!

The highlight of the evening for me was when Caroline, Kerri and Sue stepped away from their mics, walked off the stage and stood steps away from the front row of the audience and fearlessly and flawlessly performed the Chipmunks Christmas Song a cappella. Not a creature was stirring during the performance that deftly endeared The Good Lovelies to every soul in the place.

Throughout the evening The Good Lovelies had us laughing, crying, clapping, foot stomping and singing along. They have a knack for selecting which group-member would be perfectly suited to perform lead vocals on any given song. Separately their voices are noticeably different and compliment the songs they perform, but when they harmonize, those individual strengths combine to form a powerhouse trio that is simply unstoppable and unforgettable.

It’s so thoroughly enjoyable to watch a group of professional and extremely gifted artists who so obviously love what they do and revel in sharing their passion for music with anyone willing to lend them an ear. The Good Lovelies are a joy to hear and a joy to watch because their enthusiasm is truly infectious.

The second set closed appropriately with a rendition of “Auld Lang Syne” that just oozed with both pleasant nostalgia and wishful thoughts for a better tomorrow. The audience could’ve easily called it a night following the final note, but they simply weren’t having it. The Good Lovelies were quickly lured back to the stage by the seemingly never-ending applause and gregarious foot stomping. This and their standing ovation were rewarded with a playful rendition of Mele Kalikimaka as the encore.

You could say The Good Lovelies had us at Kalikimaka, as in the minds of many of us, we’d already bought tickets to next year’s show before the song was even over. That’s certainly the mark of a great performance.

Following the concert, Caroline, Kerri and Sue graciously met their fans by the merch table to shake hands, sign autographs and take pictures. An act of kindness and generosity that I wish more artists considered making time for.

Whether you’re naughty or nice, do your heart a favour and go see The Good Lovelies during their annual Christmas tour. You might just come out a little less naughty and a lot more nice.

Set 1
What Could It Be? (Intro)
The Garland
God Rest Ye Merry Gentlemen
Maybe This Time
Do you want to Build a Snowman (from Frozen) & Frosty the Snowman
Little Saint Nick
Toyland
Song of the Magi
You Don’t have to be a Santa Claus
Man with the Bag
I See Gold
Christmas (Baby Please Come Home)
Jing A Ling Jing A Ling