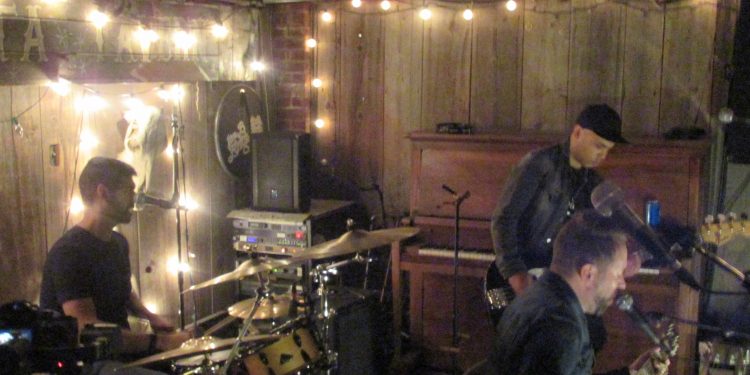 Deciduously speaking, when our cellular apprehensions fall into a preoccupation with the approach of winter, the inner sap of our collective spirit traditionally goes to ground, seeking the comfort of the roots, and we divest ourselves of our exterior colours and brace up as they fall away and fade to sere and dun.

Not being trees, however, we can also escape.

Such motivations invest Wide Mouth Mason’s new album, I Wanna Go with You. True to the title, core members Shaun Verreault and Saf Javed, not unlike Canadians in general – both people and geese – endorse the migratory option. Lyrically, they choose flight over inertia every time.

“You’re livin’ or you’re dyin’ and there ain’t no in between,” they sing in the hook of the opening tune, “Bodies In Motion.” All of the songs in this new collection, their first in eight years, are animated by images of free movement, travel, and their many impediments.

We seem to be participating in a voyage back in time as well, listening through a plate of antique dark glass as the sonic texture of Ryan Dahle’s production embraces vintage instruments, slap back echo, shout choruses, multi-tracked guitar and an assiduous loyalty to the backbeat to recreate the feel of 30s and 40s folk/jump blues. The record also prominently features Verreault’s innovative “Tri-Slide” technique, using three slides on his fretting hand. In a country that has almost as many proponents of country blues as it has of the fiddle, what sets Wide Mouth Mason apart from Michael Jerome Browne, Steve Dawson or Cecile Doo Kingué is their rock-band heritage. The occasional melodically-layered harmony vocal or folk/pop signal rectifiers such as “Anywhere” or the album’s anti-nostalgic closer “You Get Used To It” arise as buffers between the head-on high voltage chargers. They also play a startling wild card with an almost unrecognizable cover (spoiler alert) of Bowie’s “Modern Love.” In a recent showcase at Toronto’s Dakota Tavern, the band was also savvy enough to do an encore of classic Wide Mouth Mason repertoire, including “Smile” and “Why,” to spark the sing-along tinder of their abiding audience component of a certain 90’s vintage.

With Dahle having added his own bass tracks to “hold the place” for an eventual player to fill in, the band decided that his undercoating contribution was exactly what was needed and kept them in. On the forthcoming tour of the album, the band will be taking subterranean support from the incredibly concrete bass talents of Darren Parris. For live fidelity, the songs, as recorded, are all templated to a trio format, although harp-mongers Shawn Hall (minus his Axe Murderer partner) and Big Sugar alumnus Kelly Hoppe bring some hyperspace harmonica to bear on two tunes. Although there are no dates set as yet for a tour, once the record finds its legs, there will be plenty of map reading and hard road spreading out as Wide Mouth Mason navigates the blue lines of the world’s wide open spaces once again.

Check out this slide show of the ...