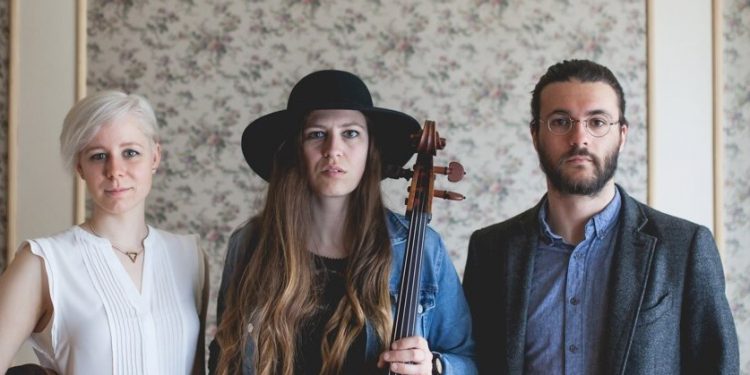 I recently revisited this CD, one of the loveliest things I received in the last year. Le Boire Des Minuits (the midnight drink) is definitely worth repeated listening.

É.T.É. is a trio of young people from Québec: Élisabeth Moquin (fiddle, feet, stepdance, and voice); Thierry Clouette (bouzouki, feet, voice, and bohdran); and Élisabeth Giroux (cello and voice), singing and playing their way into our hearts with stellar musicianship and superb arrangements. It’s just a wonderful example of what the new generation of artists in Québec is producing today, and this trio is receiving well-deserved recognition for their hard work and shared passion.

In 2017, É.T.É. was awarded the Grand Prix Desjardins de la Culture de Lanaudière in the category Émergence. For 2017-2018, they were awarded Discovery of the Year at the Prix Opus Gala. That they received this recognition for their first album together is not surprising at all when you hear the music these three are creating.

This is indeed some of the most listenable music you’ll find in contemporary Québec folklore. É.T.É. gives us traditional Québec tunes and songs interspersed beautifully with the members’ own compositions, as well as some newly-composed material from other eminent Québec musicians. There are square tunes and crooked ones, lovely ballads and energetic call-and-response songs.

Le Loup des Bois is a set composed by Élisabeth Moquin, who sings and fiddles her way to the finish. The cello and foot percussion give this piece extraordinary depth.

The great Scottish fiddler Alasdair Fraser made the point some years ago that the cello and the fiddle have centuries of tradition making music together, but in recent times that combination has been largely overlooked. Alasdair himself brought it back when he joined forces with cellist Natalie Haas.

É.T.É. brings that fiddle/cello combination to the music of Québec but also adds Thierry’s lovely bouzouki and other instruments, as well as sounds from guest artists such as Jean-François Bélanger (nyckelharpa, fiddle), Rémi Pagé (fiddle), and Simon Degrave (banjo). Other voices join as well – Mathieu Gallant, Camille Leclerc and Simon Degrave as the chorus for the call-and-response songs.

Aside from the opening blast of fantastic tunes titled “Suite 216-B,” one of the most fun sets on the album is “P’tite Moquine” –a set of three rocking tunes where both Élisabeths – cello and fiddle – strut their stuff to perfection. The final tune in the set is “La Moquine” – a tune composed for Élisabeth Moquin by the highly respected composer and traditional fiddler Claude Méthé. It is a bright and cheerful tune that was inspired by Élisabeth’s absolutely stellar stepdancing.

This is a great collection of music that really shows the talent of these young performers. É.T.É. is indeed the blooming summer of Québec folklore.