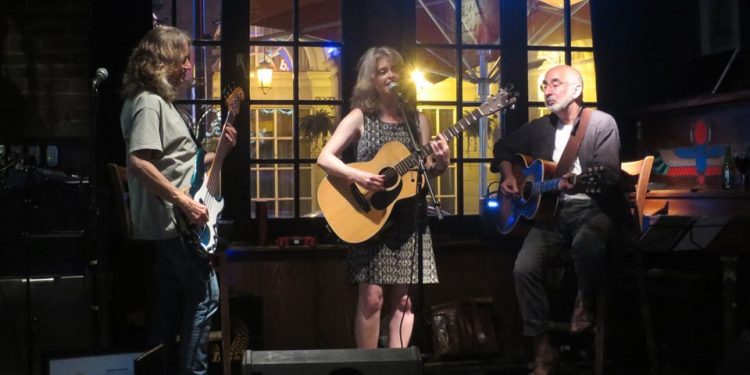 A gifted artist known for thoughtful, heartfelt songs of uncommon beauty, power, and insight, Toronto singer-songwriter Lynn Harrison is an inspiring presence on Canadian stages. Her new album Something More (produced by Noah Zacharin in association with Douglas September), continues her ongoing exploration of love, life and the human spirit. This, her sixth solo  album, will be released with a concert on Sunday, Jan. 26 at Toronto’s Hugh’s Room Live (doors at 6:30 p.m. and music from 7:30-9:30 p.m.) Lynn will be joined by Noah and bassist David Woodhead, and singer-songwriter Alan Moffat will open with a short set.

For those unfamiliar with Lynn, she is a concise storyteller, prolific songwriter, and expert turner of memorable phrases. Also an ordained Unitarian Universalist (UU) minister currently serving the First Unitarian Congregation of Toronto, she’s the creator and host of The Bridge, a themed open stage that blends music and spirituality in an innovative and inclusive way. In all paths of her work, Lynn presents an inspirational message of love, hope and justice.

The soothing, gently rolling melody of “You Come to Me,” which opens and sets the tone for the new album, is a contemplative and healing love song to the Muse – and by extension, to the Universe itself. Producer Noah’s electric and slide guitar parts lend a poignant soulfulness to the proceedings.

The title track, “Something More,” also offers a message of hope and inspiration for us all, set against Lynn’s captivating fingerpicking and Noah’s melancholy, distorted but quiet electric guitar.

“Pretty It Up” seems on the surface like a song about a challenging romantic relationship, but it is actually a broader look at the difficult world of our times. As Lynn says, “We can’t pretty it up anymore.” Douglas September’s pedal steel moan really brings the point home.

“Riddle” is a minimalist guitar-and-voice piece that deeply contemplates the great mystery of life itself through a series of zen koan-like questions. As she also suggests in the previous song, Lynn says she doesn’t need to know the answers; it’s enough to receive the riddles and be guided by a deity.

Set to a breezy, jazzy, folk-pop background, “Don’t Know How it Works” accepts confusion as our natural state in life and positions universal love and light as its remedy. The song features a gripping line that says, “I don’t know how…to turn this anxious overflow into an easy grace.” George Koller anchors the song with a lovely bowed double bass.

“Waves” is a stark, simple, introspective ballad, that encompasses the fear of death, the possibility of being brave, and the hot flashes of menopause. Somehow, Lynn makes it all work together.

“When I’m on the Water,” featuring her excellent, folky fingerpicking, finds her experiencing a typically Canadian epiphany in paddling a red canoe on a still river. It showcases a dreamy, atmospheric electric guitar prelude by Noah.

The gritty “Home Away from Home” paints a dark, evocative alt-folk picture of Lynn’s ancestral roots in Texas, inspired by and written on her recent travels in the South.

“Always Falling in Love” is a dreamy, moody song of love and longing, accentuated by the jazzy, muted trumpet of Alexander Brown – which really shines like polished brass in his solo.

Driven by Adam Warner’s propulsive snare drum brushes, and Ed Michael Roth’s bouncy accordion, “Protester” is the catchiest and most upbeat tune here. It’s about being offended enough to be motivated to action. As Lynn says, “Till I saw what you did, sir, I was not a protester.”

“Someone to Look Up To” is a gospel-pop tune that asks, who (in Earth or Heaven) can we truly look up to in times like these? Noah adds harmonies on this joyous song that tries to make sense of it all. It features Denis Keldie on Hammond organ and Ian de Souza on electric bass.

The final track “Whose Idea Was This?” is a personal musing on time, spanning life and love, coupled with another classic Canadian folk theme: travelling across our vast nation. The line “We’ll make it home” has a delicious double meaning, speaking of both reaching one’s destination, and finding safety in virtually any situation.