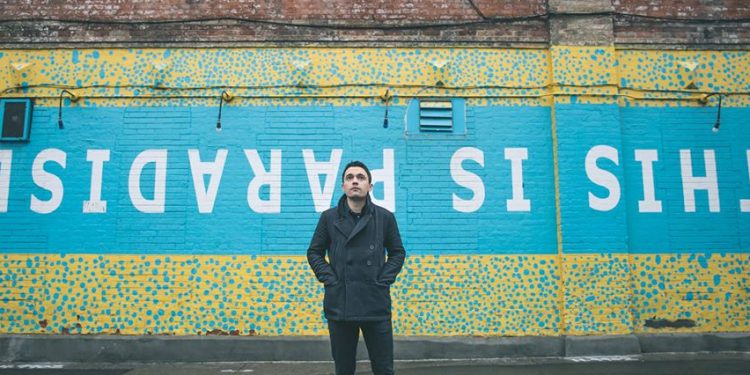 I attended the second annual Troubadour Festival in Barrie, ON last month and I was fortunate enough to be able to sit down and chat with Vancouver-based singer-songwriter Joshua Hyslop before his Friday night set.

Joshua is busier than ever these days. In May, he wrapped up the recording of his fourth full-length album, to be released on Nettwerk sometime next year. The 11-song album has been mixed and mastered, and Joshua was looking forward to heading back out on tour this month, with dates in the USA, Canada, Europe and “hopefully Australia” he said.

In addition to writing, recording and touring across the globe, he’s been doing house concert tours annually for the past seven years. In fact, he set off on one this summer the day after he finished recording the new album.

“I did a cross-Canada house show tour in June in my old Volvo station wagon,” he explained. “I have a bed in the back of this thing. It’s from 1989, and I just drove all the way across Canada, playing shows and sleeping in my car. And I’ll probably do another one of those, which people can sign up for if they go to my website. Or if they follow me on Instagram, they’ll find my post about it, and they can apply… If it’s feasible we do it.”

Joshua appreciates house concerts, he said, because the people coming to see him are typically there because they want to be and not because a friend dragged them out to a bar, neither knowing nor caring about the music.

“[P]eople are very excited that you’re coming to their home, and so every night is a great show,” he said. “You are actually meeting and connecting with people… It becomes a way of building not just like a fan base, but actually a community of people around you – which is, I think, the whole point of what I’m trying to do.

Getting to know the homeowners the morning after the show is also an enjoyable part of the experience, Joshua said.

Joshua’s forthcoming album sees John Raham (Frazey Ford, The Be Good Tanyas) return as producer. He also played drums and mixed the album, which was recorded in Vancouver, BC at Afterlife Studios (formerly Mushroom Studios). Joshua was excited to add that it also features Jesse Zubot on violin, Darren Parris on bass, Paul Rigby on guitar, and Matt Kelly on pedal steel.

“Everyone who was on this – like these are amazing Canadian talents that are pretty awesome to get to play with.” he said.

Asked how he felt his music had evolved over four albums, Joshua said the new album marks a shift for him from primarily telling other people’s stories to focusing on his own.

“So it’s much more personal,” he said.

“There’s some definite differences in the style in the sense that the fingerpicking that I’m doing on this record is a lot more difficult than the stuff I’ve done before. There’s a lot of alternate tunings that are being used. Overall, it’s a little more [of an] up-tempo record.

I’d never had the pleasure of seeing Joshua live before the Troubadour Festival, and his appearance at the St. Andrews Presbyterian Church in Barrie was the perfect setting. The venue easily leant itself to a listening crowd, some of whom may not have been familiar with Joshua’s music.  Joshua’s years of experience as a live performer quickly caught our attention and held onto it throughout his set. I was almost immediately mesmerized by his fingerpicking and the strength of his songwriting. Mixed with humorous stage banter, a hint of self-deprecation and the debut of new material from his forthcoming album, Joshua’s performance was excellent. The icing on the cake was when he elected to close his set by performing his final song acoustically. Unplugging his acoustic guitar and stepping away from the mic, he performed “Someday” in front of a now-enraptured crowd.

Joshua Hyslop earned himself a fan for life that day, and I’m very much looking forward to seeing him again – maybe even in my own home.