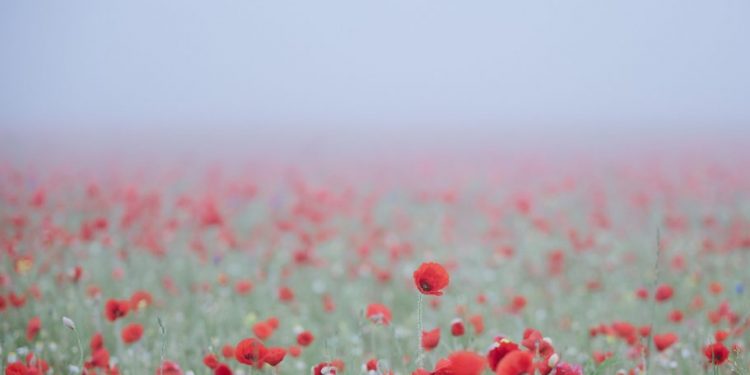 Last year on Remembrance Day, we featured seven Canadian roots songs about the Canadian war experience, and we posted the story on Facebook and asked for other suggestions.  Wow, did you ever come through!  We got turned on to so many great songs that we’re sharing more of them with you here today.  In honour of Remembrance Day, here are seven more songs about the Canadian war experience and the fallout thereof.

One of the lesser-known tracks from David’s Juno-winning sophomore album Far End of Summer, “Flowers of Saskatchewan” is written from the perspective of someone looking out at the shores of France in the present day and reflecting on those who never made it home.  Like most David Francey songs, it expresses a feeling that so many have had in a way that so few could ever get down on paper so evocatively.

Doris Folkens – “All Our Roses”

This is a brand new song from an up-and-coming voice in Canadian roots music, whose music we’ve featured previously on Roots Music Canada.  A number of Doris’ songs draw inspiration from her own family stories, and this one is no exception.  It’s based, she said, on her family’s experience of living through war.  The lyric video was produced by Ottawa trad artist and multimedia guru Graham Lindsay.

This song, which was never officially released, dates back to a series of demos Gordon recorded for Warner Brothers Publishing between 1964 and 66.  What’s perhaps most striking about this song is that it manages to be both a tasteful tribute to the soldiers who have died in war and an anti-war protest number at the same time.

“Hold the Line” from Nathan’s debut album, True Stories, tells the tale of two fresh-faced farm boys sent to fight in the First World War.  The story starts like many of them do but ends with a twist – a statement about how war impacts the soldiers who survive.  And I don’t mean PTSD.

If Nathan Rogers didn’t touch on PTSD in “Hold the Line” Madeleine Roger certainly does in “Soldier Song.”  “Another day goes by and I find, That you are a stranger to me,” she repeats throughout the song in a jazz-tinged voice that sounds incredibly reminiscent of Joni Mitchell’s on this track.  “And much to my dismay, You still cry at night, ‘Don’t make me stay” she sings.

This comes from Fred’s 2003 album with the Flathead Noodlers titled Balin.  It’s the story of a First World War vet whose perspective on war changes when a train fails to deliver an anticipated arrival.

Katherine Wheatley – “On a Beach in France”

Katherine wrote this song after being inspired by a scene in a Timothy Findley novel she’d been reading in which a mother tries to explain to her child why dad is the way he is.  It’s written from the perspective of a woman contemplating what the men in her life saw during the Second World War. She recorded it for her 2009 album Habits and Heroes.

Congratulations to your 2019 Maple Blues nominees

Dave Gunning – Up Against the Sky ...