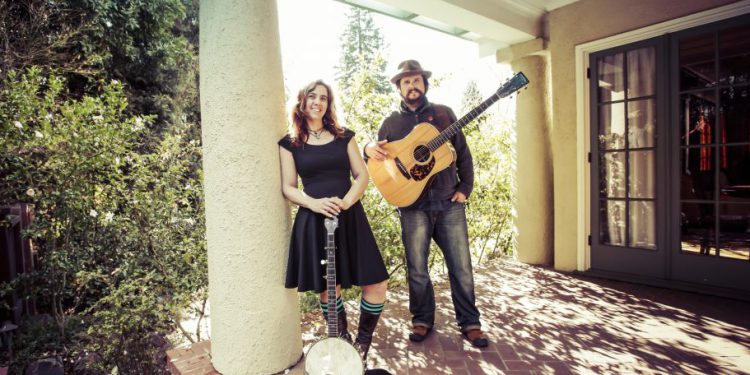 It’s hard for me to imagine how anyone could not love The Small Glories. Even harder to imagine is seeing them live and not falling head over heels for the powerhouse/high-energy duo that is Cara Luft and J.D. Edwards. The musicianship, the songs, the stage banter, and most of all, the sound of their two voices together is undeniably entertaining. Although not siblings or romantic partners, they’ve got that “rub” (as my friend and colleague Wendy Waldman calls it) that duos like The Everly Brothers or The Civil Wars had. The variety of vocal possibilities is endless with these two: Cara solo, J.D. solo, Cara harmonizing above J.D. and sometimes under (and often many of these varieties in one song), and when they join into a unison, it’s a “togetherness” you can actually feel. They each have different vocal styles (melismas, slides, dynamic approaches), but that only adds to the magic of their harmonies. 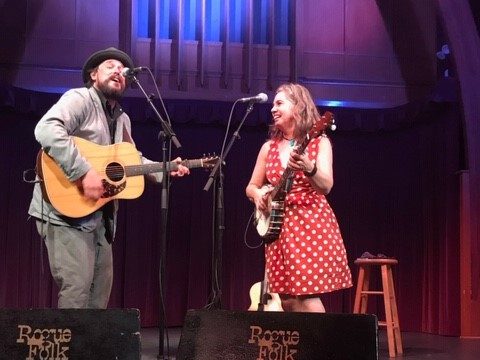 The first set was mainly songs from their latest album, Assiniboine (“a-sinna- boyne”) & the Red (two rivers in western Canada), a collection of 10 songs written at a songwriting retreat where they collaborated with James Keelahaghan, Catherine MacLellan, Lynn Miles and others. The second set included a variety of new and older songs from previous albums, Wondrous Traveler, covers and more. Cara plays clawhammer banjo and guitar in a “seemingly” basic manner, but the subtleties she adds can only come from a musician who is completely in charge of her instruments. J.D. pays guitar and harmonica and is equally as proficient. The combinations of different instruments also add to the variety of sounds a duo is usually capable of. Their sound is Appalachian meets contemporary singer-songwriter, traditional sounding but with unexpected chords and melodies. It would be difficult to single out specific songs because frankly, they were all great. A personal favorite was an older song of theirs, “You’re No Friend of Mine” (from their debut EP). Other audience favorites were “Johnson Slide,” “Pieces of Me,” a great cover of the Zeppelin/Bert Jansch “Black Waterside,” “Alberta” (a ballad that turns into a hoe-down), “Time Wanders On” (more instrumental solos please!) and the encore, “Way Over Yonder in a Minor Key.”

Do they talk a lot between songs? Some might say yes. Did I mention they are funny as hell? Personally, if I’m laughing, they can talk all they want. After all, they played around 16 songs so there was plenty of music. And these days, I’ll take any opportunity to spend a few hours in the company of great music and stories. It’s obvious this band has been offering audiences exactly this hundreds of times. Rock on Small Glories!

Congratulations to your 2019 Maple Blues nominees