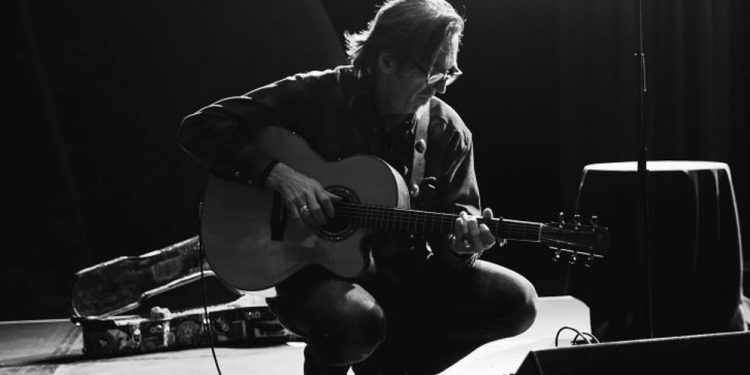 “Is your present pretty tense?

Is it all just too much for you?

Does anything make sense,

Or does everything just bore you?”

Stephen Fearing, “The Unconquerable Past”

Fear not. Stephen is back with his 13th solo recording, The Unconquerable Past – casting a long and measured glance across the decades and making some pretty good sense while he’s at it.  The results are anything but dull. Co-produced by Stephen and Winnipeg artist-producer Scott Nolan, these 10 shining tracks highlight the poignancy of remembrance – of people and places, hopes and regrets – resulting in hard-won wisdom, generously painted upon a colorful backdrop of roots-based instrumentation. Splashes of piano, Wurlitzer, pedal steel, electric and Stephen’s own virtuoso acoustic guitars are layered beneath the impassioned vocal – all existing in perfect harmony with the lyrical focus, delivered with a razor-sharp pen well-honed by time.

With an additional dozen or so recordings behind him as a member of side projects Blackie and the Rodeo Kings and the duo Fearing and White, as well as many miles of global touring and decades of inner exploration, this baby boomer has earned his stripes with the resulting authority to tackle such a grand theme.  Echoing concerns he’s touched upon throughout his career, such as social conscience, environmentalism and relationships, Stephen draws a striking parallel between a man contemplating the autumn of his life while recognizing a synchronous sense that our society too is entering a chapter that has the potential for extinction.

I caught up with him on a brief touring hiatus in his hometown of Victoria, where he and his wife are restoring a ramshackle 110-year-old heritage house.

“It’s all we could afford,” he said of a structure whose colorful history includes a period as a rooming house that was later broken up into separate apartments.

“I’ll probably be working on this place for the rest of my life,” he said ruefully.

Fixing one small portion at a time during gaps in his touring and recording schedule leaves little room for rest, but as with the creation of art, he reminds himself that the joy of something is in the doing of it.

“This record happened quicker than anything I’ve ever done before – the writing, recording and production,” he said.

The opening track, “We Were Born to Break Our Mother’s Heart,” was co-written with BART band-mate Tom Wilson, introducing the theme beautifully with the retrospective line “Left my hometown for salvation, came back banging on my drum, lighting fires to keep me warm and blowing every chance to kingdom come.”

Like so many of the songs on the record, it invites the listener to explore experience in light of personal accountability. It’s written from a first-person perspective, but echoes the concerns of society as well.

Holed up in a fifth floor condo overlooking James Bay and the ebb and flow of strangers below, Stephen found that most of the tunes fell out in a pile after he came across the evocative phrase “the unconquerable past” in a novel. A startling image springing from childhood memory found its way into the title track; having stuck his arm through a plate-glass window by accident,  a glass shard emerged several months later, resulting in the lyric “a smithereen of glass  . . . memories beneath the suture.”

“I was miles away from considering myself a songwriter at the time, but that image went in and came out after all these years,” he said, illustrating the idea that for better or worse, our experiences inform our beliefs, actions and subsequent results.

“I have a sense that sometimes things get stitched up, and it doesn’t always feel that good,” Stephen said. “But you gotta keep moving on.”

In the following lyric, “we drove so fast the wheels came off of our adventure,” he could easily be singing about humanity as well as personal history, but concludes with the comforting thought that we can “take it on the chin and learn to start again.”

In “Gold on the River,” he touches on the urgency of doing just that, illustrating that through the passage of the days and seasons “time is both a taker and giver,” and the irony of his realization that “By the time I found the stillness in myself, I wondered just how many years were left upon the shelf” – a thought many fellow baby boomers can surely relate to.

In “Marie,” “Stay with Me,” and “Walk in Someone Else’s Shoes,” he soberly acknowledges that we are “sailing over dark and troubled times” and warns us to brace ourselves “for the shit-show that’s coming down tomorrow.” This includes the return of  “midnight riders” and “brown-shirts,” the dangers of  “tinfoil hat religion,” and the grim prospect of our “sad plastic planet floating out to sea.” For Stephen, empathy is the key.

“Recently, especially in forums like Twitter, it seems to me we’re seeing the death of civility,” he said. “I’m stunned by how virulent it is, especially when some woman speaks up about her beliefs, experiences or political views. Someone pointed out to me recently the reason humans have been so successful is actually empathy. We don’t have claws, and some animals can run and smell and hear and see better than we can. But we can form community, which enhances our ability to be successful. When empathy goes away, community is endangered. So the death of empathy is a dangerous thing for us as a race.”

There is always hope. Transgendered “Sunny” is healed by unconditional love, while super-charged rock’n roller “Christine” can take whatever life dishes out.

“You never know how strong she is until the water’s hot,” Stephen sings.

The haunting, Celtic-tinged David White co-write “The Emigrant Song” is a reflection drawn from personal experience that offers a compassionate window upon recent global conflict over borders.

Surprisingly, the record’s final tune, “No Country,” is a cover.

“Scott Nolan and I have known each other for years. We’d talked about writing a song, and that kind of morphed into the idea of recording together,” Stephen said. “I turned up at the sessions with space on the record for a co-write, and he came to me with ‘No Country,’ saying, ‘Here’s a song we could write together.’ ‘What do you mean?’ I said. ‘It’s perfect the way it is. Can I record it?’”

As Stephen notes, the song works perfectly as a coda – a quiet reminder that with all of life’s ups and downs, it is a privilege merely to be alive.

“There’s a piece of my heart that no country can claim,” he sings. “All I have in this world is my word and my name . . . if there’s peace in this world, I ain’t found it yet, but still I’m the fortunate one.”

Wading through the shadows into a place of light, it appears Stephen’s sense of optimism is well intact.

“What’s happening with the environment right now seems to be new territory. On one hand, it is terrifying, and maybe the world as we’ve known it is gone,” he said. “Maybe the way we’ve done things in the past, things we are still trying to hang on to – like a house with a front and a back yard – are gone. But as far as life on earth, love and the pursuit of happiness go, I just can’t believe it’s that dark of a storm.

I don’t know if that’s because I’m really lucky, or I’m really privileged – I mean, I am a white male, so check those boxes. But still, I’m an artist, and I’ve been filling out the “other” category at the bottom of the form for my whole life. Humans are really remarkable. The pendulum swings. The Conservatives win, the Liberals win, the Conservatives win. That stuff seems to go back and forth. But there’s always something – it just may not look like what we are used to.”

The months ahead will be busy ones for Stephen Fearing. Following the release tour for The Unconquerable Past comes the next Blackie and the Rodeo King’s effort, a special 25th anniversary release set for January 2020 – a project that will pull him further into a mysterious future.

When he gets a breather, he’ll return to his crumbling mansion in Victoria. An artifact of a time when modern advances were untouched by the fear of global destruction and societal collapse, it waits for the changes necessary to keep it functional, relevant and beautiful – changes dependent upon Stephen’s own ingenuity, commitment and financial success. For an artist, every creation is a gamble against the odds.

“It has certainly tested us all – with chaos and dirty work galore – but I feel that we have a home to live and grow from. There have been so many instances where I can’t seem to figure out how to fill in the blanks. ‘How am I going to make it through this crisis? How am I going to pay my mortgage?’ And still, it always works out,” he said. “People are amazingly resourceful, and there is a sense that each generation is smarter than the one before. Bless my parent’s hearts, and I do respect my elders a great deal, but then I look at my daughters – they’re unbelievable.”

With whatever resources he can muster, Stephen will soldier on with hammer – and axe – in hand.

Making the most of the past to bring meaning to the present in hopes of leaving a solid legacy for his family and his fans, Stephen knows the past may be unconquerable – but that isn’t stopping him from trying.