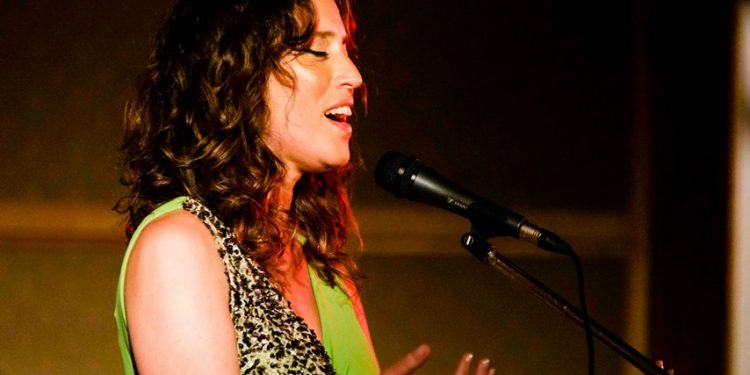 Aviva Chernick has a long history of singing passionate, praiseful music – in her own career, as a cantor in synagogues, and with the progressive jazz/world collabo known as Jaffa Road. She has been especially savouring the exotic flavour of Sephardic music for 13 years now, since an epiphany moment at Toronto’s Ashkenaz Festival when she first heard the melody that provides the title for her newest disc, La Serena, available since Sept. 16 at The La Serena Home Page.

The Jews of the Iberian Peninsula in the 15th century were the original authors and guardians of the Sephardic canon, sung in Ladino (a hybrid of Hebrew and Castilian Spanish), so rich in lyrical and melodic sweetness that it became orally airborne, managing to achieve popularity even back in far Jerusalem. But, as history would have it, beginning in 1492, this community was forced to swear allegiance to the Pope. The portion of the dissenting populace that could evade reprisal was then forcibly expelled from Spain and Portugal, dispersing worldwide. Like the Acadians of Canada, they carried their cultural treasure with them, spreading its unique sound all over the globe.

From 13 years of shivers over a mystic melody that was written out for her on a paper napkin by South American artist Marcello Modeleski, this record has evolved slowly. In it, Aviva revivifies the spectrum of Sephardic song by selecting favourite classics of melancholy longing, praise and celebration.

“It’s an unusual listen. We are presenting feelings of exile and exploration and the fear of being lost at sea, calling out and not being heard, all in the time capsules of each song, in a language that could have easily vanished, ” Aviva confides. ”But I think the beauty of it comes from the heart, and that feeling will leach through the vessels of the compositions to touch the heart of the listener.”

Throughout the record, the bold and elegant curvature of Aviva’s voice stands unadorned and vulnerable. “The reverb on the voice is dialed way back. We debated about that quite a bit. I was trying to see how close I could get to the listener. We made an effort to bring the voice super close, like I was singing in your ear – it’s okay, I’m right here.”

It emerges vividly amidst the subtle architecture of layered and reverberant instrumentation constructed by guitarist and co-producer Joel Schwartz.

“We were originally just a duo. We actually did a duet concert in 2015, and then I just veered into other things. But a degree of that one-on-one intimacy still remains on the record. And the guitar is just ‘LISH’.”

The construction of an organic ensemble to enhance the personal nature of the tunes was deliberately pursued. The next elemental alloy was Justin Gray’s bass webbing, which brings a bounce and a visceral empathy to the intent of each lyric, comforting or coaxing the vocals.

“Justin and his riches are just so spacious. And his bass veena, which he designed himself, is just goooorgeous. When we perform live with it, he and Joel perform an intro to ‘Arvoles’ that brings tears,” Aviva said.

Justin also signed on as co-producer. The final jewel in forming a quartet was the “spectacular master Persian percussionist,” Naghmeh Faramand, whose virtuosic fingertips support many of the more adventurous ensembles in town, including Al Qahwa and Tafelmusik.

All the selections chosen for this record take their inner fire from Aviva’s gregarious and adventurous spirit.

“Singing Ladino comes from a different part of my body,” she said. “There are also three Hebrew tunes that play really well with the others and bring a different kind of groove.”

The key title track, “La Serena,” “resists the ironic notion of the Siren, the female voice, as an instrument of seduction and destruction,” she said. “In fact it is liberating and full of joy and ferociousness. The final verse, which I sing in English, says, ‘If I could only create a sea of compassion, then I could accomplish the work I need to do.’”

There is drama and mystery in the awakening and unwinding of each melody. In the absence of any keyboards, wind or brass, the voice becomes the sustaining chain, linking the music’s gemstones to an ethereal current of breath. As in John Simon’s restrained production values on the first Leonard Cohen album, the players remain a respectful distance from each tune until they are drawn into the gentle waves of the lyrics, suggesting images of mountains and gardens emerging from the luxurious damask texture of each song with moody soloing or chanting.

Aviva has an intensely personalized demographic for an audience: fans who consider themselves friends, focused by her charisma and empathetic delicacy as much as by her music. Other singers and musicians are drawn to the intimate purity of her expressiveness as well. They all showed up to pack the album launch in the temple-hushed A-frame at 918 Bathurst in the waning of the harvest moon. Aviva appeared out of the darkness on the floor in front of the stage, beginning the show with a tribute to her nona, Nona Flory, who appeared briefly in a video projected above the stage. The musicians became intent upon giving each song an instantaneous rebirth, expanding upon the frameworks established on the record to extrapolate new dimensions of expression. Furthering the intricate embellishments, guests Ernie and Maryem Hassan Tollar joined the quartet at certain peaks of the program to invigorate the harmonic and spiritual fabric of the night. And that intro to ‘Arvoles!’ My goodness!

“It’s the most beautiful and joyous recording I’ve ever done,” Aviva avers. “This is our antidote, this is our revolution: putting out songs that come from legacy and honour. This is our way of putting up the middle finger to hate.”