Too few people have seen this awesome Ronnie Earl video 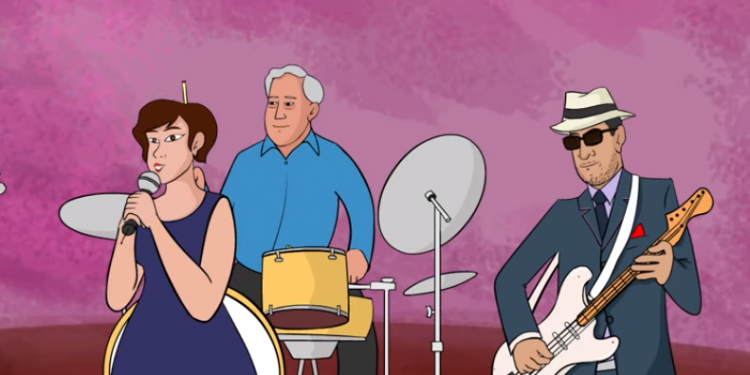 Ronnie Earl may be well into his 60s, but he hasn’t lost an ounce of his cool, as is evidenced by this all-too-brief teaser video for his brand new album, Beyond the Blue Door, which came out Aug. 30 on Canada’s Stony Plain Records.

The video features the entire band, reproduced as animated figures, performing “The Sweetest Man” – and ya’ gotta admit, it’s a pretty sweet animation. The sound quality is a bit rough though, so we’ve also included a Soundcloud embed of the full song so you can hear what it sounds like on record in all its glory.

Ronnie, if you’re unfamiliar with his story, is a four-time Blues Music Award winner as Guitar Player of the Year and was the hit of the most recent Blues Music Awards show in Memphis, TN with his show-stopping live performance of the Junior Wells classic “In the Wee Hours.”

He followed that up with the new album, featuring his band, the Broadcasters.

Ronnie believes in the power of music to heal the mind and spirit, and that’s quickly evident in the 15 tracks on his new disc. Special guests on the album include David Bromberg on acoustic guitar and vocals; Kim Wilson on harmonica and vocals; and Greg Piccolo on tenor sax.

The core group of Broadcasters – Ronnie Earl on guitar; Dave Limina on Hammond B3 and piano; Diane Blue on vocals; Paul Kochanski on bass and Forrest Padgett on drums – return to present a solid follow-up to their critically acclaimed and beloved release, The Luckiest Man. They are also joined by Anthony Geraci on piano; Peter Ward on guitar; Mario Perrett on tenor sax; Scott Shetler on baritone sax, Larry Luisgnan on guitar; Michael Rush on bass and Scott MacDougal on guitar.

“This is a band album – a community of souls with some guests, new directions and some good old down home blues with Kim Wilson, David Bromberg and Greg Piccolo,” Ronnie said of the new disc.

By the way, Ronnie is also a DownBeat magazine award-winner for Blues Album of the Year and an associate professor of guitar at Berklee College of Music, and he has taught at the National Guitar summer workshop in Connecticut.

Perhaps David Bromberg, himself a master guitar craftsman, said it best: “Ronnie Earl is an incredible musician. He plays with more emotion than anyone else who plays blues, or really anything today, and he gets me every time I hear him. The Broadcasters are the quality of musicians you would expect Ronnie to be playing with: solid, tasteful, and moving. You can’t be better than that.”