How Harrow Fair got so good so quick 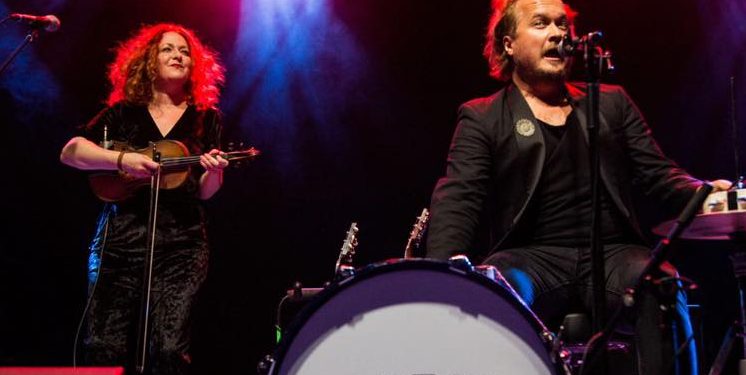 I became a fan of Miranda Mulholland after seeing her perform with Great Lake Swimmers at the 2013 Kitchener Blues Festival. Her ability to bring the Swimmers’ songs to a whole other level and her expressive and powerful fiddle playing were totally mesmerizing. So when I learned that she was performing as part of a new duo, I didn’t hesitate to go see them as soon as I could. My first opportunity came in 2017 at the Kingsville Music Festival where I instantly became a fan of Harrow Fair, the duo comprised of Miranda Mulholland and Andrew Penner.

I’ve been fortunate enough to have seen them several times now, most recently during the second annual Troubadour Festival in Barrie, ON last month. The duo graciously granted me an interview before performing a blistering set at the beautiful St. Andrew’s Presbyterian Church on the opening night of the two-day festival.

Harrow Fair formed when Miranda met Andrew through the Toronto music scene. The two started writing songs together after the release of Miranda’s solo album, 2014’s Whipping Boy, on which Andrew played the dobro.

“We wrote a bunch of stuff pretty quickly,” Andrew said. “We didn’t really talk about it that much. It was just more like it worked really well, and there was a cool chemistry, and there was a sound that kind of happened right away.”

Miranda had been a member of Great Lake Swimmers and Andrew a member of Sunparlour Players, and they worked closely together to carefully craft a specific sound for their new act.

“We had a discussion about, ‘What do we want to do as far as what it’s going to look like?’” Andrew said. “It wasn’t a super long discussion … But I think the discussion was more like stripping that down even more, where it was just something much simpler that was still providing enough of a wide kind of sonic thing going on. You have the sizzle of hi-hats, and then you have the fiddle that can just go through, but it’s going through pedals and going through amps.”

For Miranda, working with Andrew has been extremely positive and has allowed her to continue to grow as an artist, she said, even though she already has years of experience.

“I’ve been taking more chances ’cause Andrew kind of allows me to take more chances sonically than I perhaps could’ve in other bands,” she said. “And I can kind of be a little more rock n’ roll, I guess, in a way that I really wasn’t able to before.”

Together, Miranda and Andrew manage to appear as if they’ve been playing together for over a decade even though it’s only been about half that. Their Troubadour Festival set highlighted their ability to perform a tight and memorable show featuring subtle gestures between the two members as they effortlessly balanced their individual roles to form a homogeneous duo. Miranda chalks up that dynamic to good communication, she said.

“We had a good place to start from,” she said. “I think going on really long drives on tour you get to know each other really well, and you have a lot of trust.”

One of Miranda’s favourite moments from touring occurred when the duo was playing a small venue upstairs from a pub in the U.K. – it was a moment that Miranda said taught her not to make assumptions about an audience or a situation.

“There was an old lady in the front row, and I looked out, and I just thought, ‘Oh god. She’s just going to get blasted. She’s going to hate this. She’s going to hate us,’ “And I had that in my head, and then she just loved it so much, and she was toe-tapping and clapping along, and I thought, “Right right, it’s not up to me to make judgments about how they’re going to take us. It’s up to me and us to give people something they might not expect and just be as authentic as possible … I remind myself of that any time I ever start getting that little value judgement.”

Harrow Fair’s debut album Call To Arms was released in 2016 and the duo’s ability to continue to tour in support of the album surprises even themselves, Andrew said.

“The length of a record, or the legs that different projects have, and when they all of a sudden take-off is like constantly surprising,” Andrew said. “Sometimes it’s just people seeing you at the right festival.”

As a fan of the duo, and after seeing them a number of times, I can attest to the fact that the songs from Call To Arms still sound fresh when performed live. However, fans, including myself, will be happy to hear that the duo is planning to release a new album next spring. Andrew produced and recorded it at his studio and the Lincoln County Social Club studio, both in Toronto. The act debuted some new material from it at the Troubadour Festival and are planning another UK tour in the spring – in addition to summer festival appearances, a North American tour, and a return to the UK in the fall.

I for one cannot wait to hear the new album in its entirety and see them again live as soon as I can.