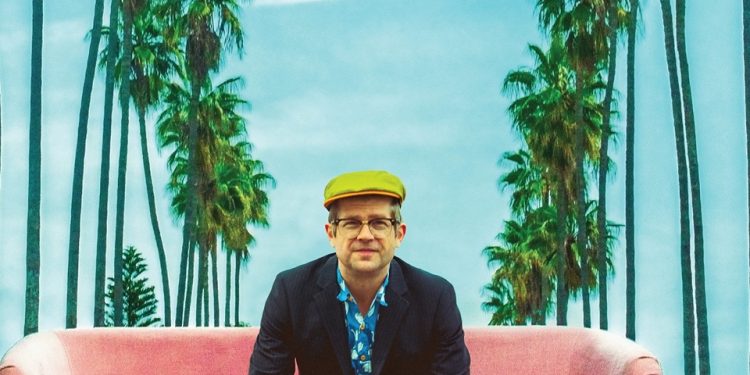 I recently sat down with Chris Luedecke, the two-time Juno Award-winning singer-songwriter otherwise known as Old Man Luedecke. Chris had just recently returned to Canada after touring throughout the UK and Europe most of the summer. As we sat in the back of the St. Andrew’s Presbyterian Church in downtown Barrie, ON before his opening night set at the second annual Troubadour Festival, we chatted about his career, the importance of live music, and his latest album, Easy Money.

Now living in Chester, NS, Chris grew up in Toronto and admitted that he initially rebelled against his father’s fanatical taste in classical music. He wouldn’t gravitate to music until after attending University and making an important and life-altering discovery, he said.

“I wasn’t going to be a musician, and then I found the banjo and I fell in love,” he said. “And I was like, ‘I’m going to write about love with this thing, with this sort of rhythmic weird out of tune drum with strings on it.’ I was so gobsmacked to discover this thing.”

Chris’ love of the banjo would open up a whole new world to the seemingly reluctant artist.

“I took up the banjo to write really literate songs,” he said, “really word-heavy songs that were simple enough that you could understand some of the lyric and uncluttered enough in the music that it would be a direct communication. And then I discovered that I loved performing live almost immediately. I get to entertain people almost every night that I want, for a pretty meaningful life. And I have a pretty great family life. It suffers from my being absent, but it is meaningful in that we’re all generally on the same page.”

As a self-professed live music addict, I always wonder what makes a great live show from the performer’s perspective. Chris told me that for him, it’s partly about circumstance.

“Most people don’t go out to have a bad time,” he noted. “So if everything lines up well, basically everyone can get along, then you can make something special happen. My job as a singer and teller of stories is really one hundred percent conditional on the vibe in the room.”

Because his songs are lyrically demanding, he wants the audiences attention and will aim to get that by talking to them, Chris explained. Once he has their attention, he tries to bring them into the song.

“I sort of ride on these little waves,” he said. “Sometimes I get it just right and I feel just a wonderful sense of warmth and connection with people, and that’s kind of always been the real trip.”

Long-time fans of Old Man Luedecke will be treated to something different when they listen to Easy Money: a lot of direct references to Chris’s influences – something he said he wasn’t ready to do until now.

“On this record, I was like, ‘What do I love? I love the Harry Belafonte Christmas album.’ So I wrote a new song laid over one of my favourite songs. … It’s a very different record, because I put [in] all the sort of calypso flavoured music that I love. I’ve been sort of in a more bluegrassy and more roots-based folk thing for the last couple of albums because I had an opportunity to do that. And now I had an opportunity to kind of stretch out and kind of draw on some of my influences.”

Following our interview, Old Man Luedecke performed a great set for the attentive crowd attending the opening night of the Troubadour Festival. Chris has been on my must-see list ever since Joel Plaskett recommended him, so I was excited to be able to see him for the first time and in such a beautiful venue like a church in downtown Barrie. He performed solo with a banjo and acoustic guitar, and his set featured several songs from Easy Money, as well as old favourites, including requests from enthusiastic fans among the crowd. Old Man Luedecke easily had us all singing along to many of his songs, even those of us hearing them for the first time. I was particularly struck by his ability to write songs featuring clever lyrics that, when combined with a catchy melody, made them easily accessible to any listener.

A great performance often inspires me to take the music home with me, so I grabbed a copy of Easy Money (autographed and on vinyl) and took it home to review.

His eighth studio album, Easy Money was released on True North Records earlier this year. The album features 12 songs, including one cover and one traditional number, and was produced and recorded by Howard Bilerman at Hotel2Tango studio in Montreal.

Side A opens with the title track, “Easy Money,” a crowd-pleaser and singalong during Old Man Luedecke’s Troubadour Festival performance. I imagine most musicians could relate to the lyric, “If they paid us for who we are, I wouldn’t have to go so far.”

“Wake Up Call,” a song about middle age, is the track that clearly highlights Chris’ love of calypso music.

When asked if they had any requests, a fan at the Troubadour Festival didn’t hesitate to shout out “Sardine Song.” It was a pretty funny song when I heard it live, and it’s just as humorous on the album.

“Death Of Truth” is a beautiful ode to Chris’ father who sadly passed away a couple of years ago.

Side B opens with “Money Pit,” a song that fans of the History Channel documentary series The Curse of Oak Island will surely appreciate.

As a new fan of Old Man Luedecke, “Le Ciel Est Noir” was a complete surprise to me. I didn’t ask Chris if he was bilingual but he does a great job of covering Nana Mouskouri’s French-language version of Bob Dylan’s “Hard Rain’s Gonna Fall.”

Fans of sea shanties will love Old Man Luedecke’s interpretation and arrangement of the traditional song “The Mermaid.”

In my opinion, Old Man Luedecke saved the best for last; “I Skipped a Stone” is the clear hit single from Easy Money, and not just because he’s joined by Bahamas on vocals and guitar on the track. This song demonstrates Chris’ best vocals and songwriting.

Old Man Luedecke’s Easy Money will take you through a range of emotions while providing you with just the right amount of humour. It left me wanting to hear more from the artist, but maybe that’s exactly the point.

Old Man Luedecke is currently embarked on a Canada-wide tour in support of Easy Money, which is now available on True North Records.