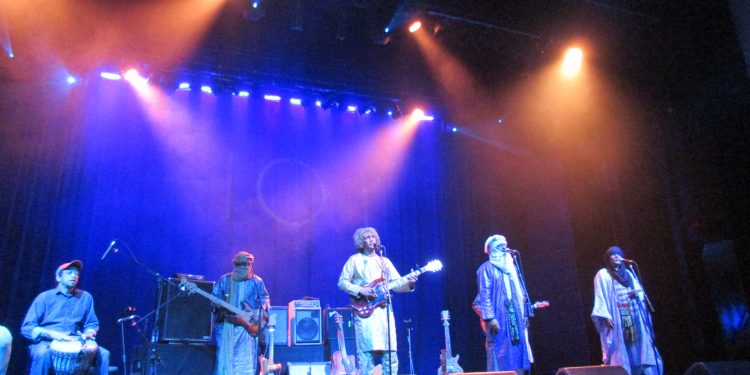 Small World’s resumption of their unique musical refreshments on Thursday night intersected conveniently with Lula Lounge’s launching of a weekend celebration of women in percussion. Featured artists included a quartet of royal jazz magnificence led by steel pan diva Joy Lapps-Lewis; a conglomerate of female song and drum talents under the direction of mestra Aline Morales entitled Vulvas (and pronounced “vulvas”); and the fiery drumstick expertise of the legendary Brazilian iconess of beats, Adriana Portela, fronting the top Toronto bateria phalanx known as T Dot Batu. Mega-hyping the atmosphere, the audience was also full of attentive and supportive rhythm women from the Lula community, including Magdelys Savigne and Elizabeth Rodriguez of OKAN and the always vibrant Eliana Cuevas. There was a puzzling absence of dancing, maybe because of the continuous pulsations of virtuosic musical intensity, or perhaps it was the new moon. But that was the only drawback of a scintillating evening of throb and swing.

Large vibes were emanating from the Danforth Music Hall on Saturday even before Tinariwen took the stage. For many, there was an expectation not unlike that at the end of a pilgrimage. Such is the shamanistic effect of their hive of guitars and the elastic bass pulsations that they produce that a visceral trance is induced reminiscent of the Velvet Underground or, even deeper, John Lee Hooker. The audience began rising up from the inexplicably tiered seating for the purposes of everything from swaying to belly dancing, but they were curiously dissuaded from these actions by house security. However when the animated Alhassane Ag Touhami took up the guitar and started his mellifluous chiming, some of the more bearded fans started a wave of commotion that could not be restrained.

It all started with coordinator Kristyn Gelfand, on behalf of co-presenter Uma Nota Culture, calling for the audience to scrum forward, as three musicians emerged from the fog to the metallic groaning of a talking drum, wind chimes and a subversively low hum. Three tables were topped up with black spaghetti and electronic gear, and a full percussion stand, a trombone and an electric bass stood loitering at the edges of the stage. The Super Avant Brazilian ensemble Teto Preto was smuggling their sexuality into Revival and irrigating the desert of Toronto’s Sunday night by stealth. Like nuclear fission, it began with shadowy men simply pressing buttons, relaying a series of sensations that slowly magnified, dominoing through the crowd’s heads. Suddenly a burnished brown giant rose up from the floor bellowing “Wake UUUP!” 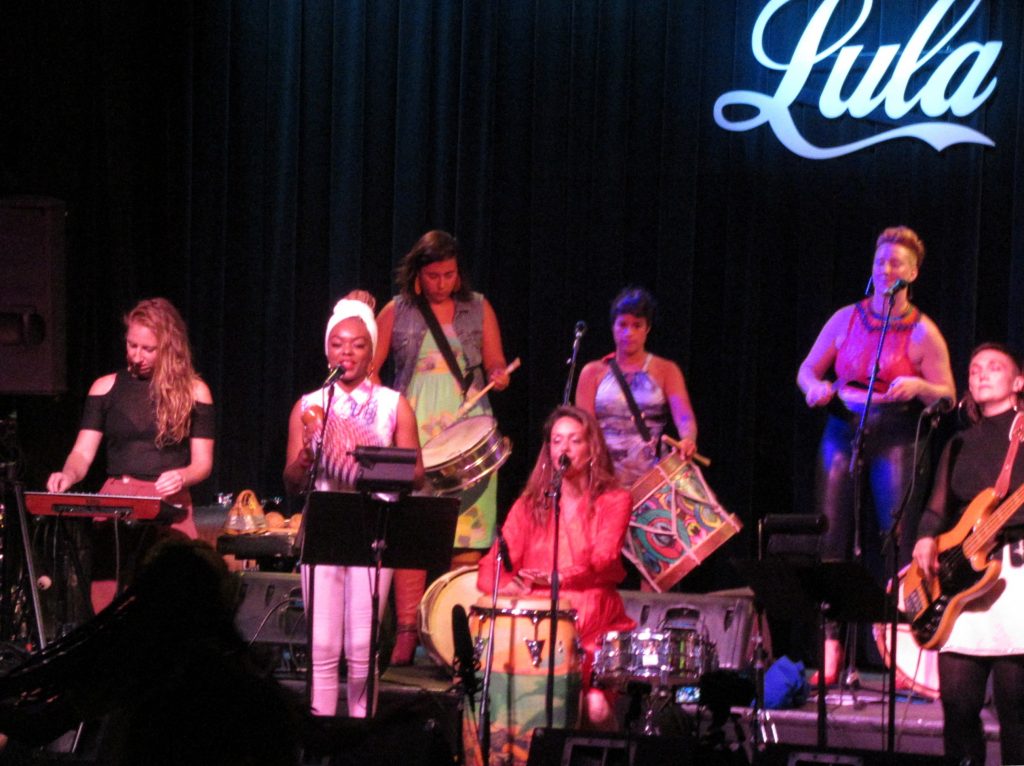 “Sorry, there IS no translation for us,” declared vocalist / performance artist Angela Carneosso to a chorus of those yips and yelps that you would hear at an 80s strip show or a 90s rave. Ascending from the middle of the audience wrapped in the crushing sounds of her electronic trio and sporting a Charlotte Rampling Night Porter cap, she was revealed to be wearing only a pair of studded leather buttless chaps and some black leather gauntlets alongside Loïc Koutana, her gigantic caped dancer in his reversed zippered miniskirt. Suddenly the guy in the audience wearing a strapless gown didn’t seem so rad anymore. Toronto’s gaybourhood had met its match with Small World’s high card in the hole, Teto Preto, taking the stage for the final Sunday night of what had already been an astonishing festival.

The shock value of the aggressive nudity created an edgy ambiance not so much porn-core as dada-core. Courting a hyperbolic reaction with the simultaneous sensory invasion of enormous deep electro-house beats and the spasmodic gesticulations of the two sexy-as-hell protagonists, the lyrics stabbed out a manifesto proclaiming the emancipation of sexual energy and the political fury of racial rage. As Carneosso writhed across and sometimes off of the stage, switching up the rhythmic tremors with her vocal modulator and a looping filter, her partner-in-anarchy stripped down to a white thong and gave terrifying substance to her threats and declamations with epic body language and anticly grotesque facial convulsions. Storms of adulation from the crowd set in, stoking the emotional level to extraordinary crests of orgiastic proportions – not to mention the dancing.

They ended by inviting only the LGBTQ members of the audience onstage to dance and shout and closed it down by proferring a reverse booty bow that cheekily ended the show at the exact one-hour mark.

“Montreal stripped us of our merch last night,” Carneosso warned. “We have two vinyls left. So if you want them, RUN!”

What use would it be to ask for an encore? Daring to return to our home planet in this newly altered state, we walked out shaken, whipped and organically charged with feelings a little too large to explain.

Small World had expanded our known universe, once again.