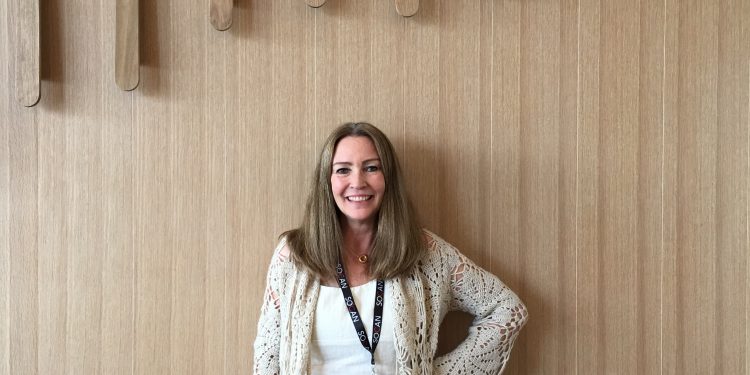 Suzanne Jarvie at the Folk Music Ontario conference where she received her award. Photo by Heather Kitching.

If you’d told Suzanne Jarvie a decade ago that she’d be this year’s winner of the Colleen Peterson Songwriting Award from the Ontario Arts Council, she likely would’ve been a bit confused.

After all, she was a lawyer who’d never written a song in her life.

But Suzanne was the kind of person who didn’t take risks in life – and let’s face it, trying to launch a career in music is nothing if not risky. She wanted a good, solid income she could rely on, and law was it. She never really pursued any of that creative stuff.

But her illusion of security came crashing down on Canada Day in 2011, when her eldest son was involved in a life-altering accident.

“I got a call on I think it was Friday from his father, who I was separated from, saying that he had fallen down the staircase at his grandfather’s farm,” she recalled. “It’s a spiral staircase. And I remember saying, ‘What do you mean he’s fallen? He’s alright isn’t he?’ And I’ll never forget the sound of his voice saying, ‘I don’t know. He’s in a coma. They’re airlifting him to Sick Kids tonight.’”

Doctors told Suzanne and her family that her son was unlikely to survive. But around eight days later, he turned a corner. He began responding to commands, and slowly – painstakingly slowly – his situation began to improve.

Then, around a month after Suzanne first felt assured that her son would not just live but would recover substantially, another life-altering change took place.

“I just started writing music,” she recalled. “I can’t really explain it to you. It was very strange. I came home one afternoon and wrote a song. It seemed to come out of nowhere.”

It was a perplexing experience for someone who had always considered herself a very analytical, “left brain” kind of person, she said.

“When my son had his accident, it was like that whole side of my brain shut down, and in that space something else was available. That’s the only way I can put it. … It was like a receiver or something was turned on in my head. Some of the songs just came fully formed like right into my head – like the whole verse and chorus structure of the song.”

She needed to rush to preserve the ideas somehow or they would decay like our memories of dreams decay, she explained.

Suzanne took the songs to one of her jam sessions, and her friends helped shape them. Then, after about eight or nine months of playing them regularly, she starting wondering if she should make a record.

“Is that like a thought that I’m even allowed to have?” she recalled thinking to herself.

She released the Americana-influenced Spiral Road in 2014, and it caught fire in the Netherlands, resulting in a record deal and at least four tours of the country.

Since then, the ever cautious Suzanne has continued to practice law by day, working as a discipline services council for the Law Society of Ontario – a lawyer who helps discipline other lawyers. She primarily tours using her vacation time.

Her son, though he vastly outperformed the doctors’ prognoses, continues to live with a serious brain injury, she said.

“It’s a lifetime injury,” she added. “There’s mental health challenges. It’s complicated. So yeah. It just wouldn’t be accurate or honest to say it’s all just come up roses. It hasn’t.”

The winning number was originally inspired by her children’s tendency to sleepwalk, she said, but it morphed into a song about how fear and anxiety can prevent us from self-actualizing.

The title of the album speaks to that mystical place or state of mind that is now mere fantasy for Suzanne: that place of feeling like life is all smooth sailing for the foreseeable future.

So what does Suzanne see in her future?

She’s still not ready to give up law, she said.

However, she’s starting to think about a new album, and she really wants to make a bluegrass record too. She’d also like to find a way to tour more – especially into parts of Canada, the US and Europe that she hasn’t already visited.

“In my wildest dreams, somebody would call me up and say, ‘We want to put you on a six month tour opening for X’ – who’s like some fairly successful act who’s like rolling around North America,” she said laughing. “And then maybe I’d be like, ‘OK, maybe I need to quit [law].’ But I don’t know.”