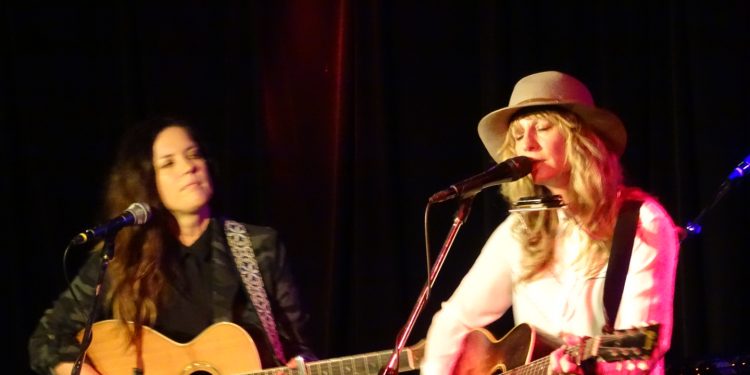 Listen to an album as many times as you like, but in my opinion, nothing compares to seeing a band live.

Ever since I received a copy to review, I’ve had Madison Violet’s latest album on heavy rotation at our house. So, I was thrilled when I learned that I’d be able to see the band perform the songs live and at one of Canada’s best listening venues.

Last week Madison Violet, the dynamic duo of Brenley MacEachern and Lisa MacIsaac, were joined by Jake Zapotoczny on stage for a sold-out concert at Hugh’s Room Live in Toronto. The band is currently touring in support of their ninth studio album, Everything’s Shifting. Undoubtedly fans were eagerly anticipating the concert as Madison Violet hadn’t performed at Hugh’s in nearly eight years.

Not surprisingly, the two sets featured several new songs. Fans were treated to debut performances of “Tell Me,” “Sight of the Sun,” “Heart Worth Fixing,” “Time to Write the Wrong,” “Second Hand Fiction,” “All Over Again,” “Seal My Fate,” and “Mama Told Me,” all from Everything’s Shifting. After hearing these songs over and over when listening to the album at home, it was a truly magical moment to see Brenley, Lisa and Jake bring them to life right in front of me. In my review, I stated that Everything’s Shifting is the best album I’ve heard so far this year, and Madison Violet’s concert only bolstered that opinion.

In addition to debuting new material, Madison Violet wisely treated fans to a selection of songs from their back catalogue and even a few surprises, another benefit of seeing a band live. Brenley and Lisa carefully crafted sets featuring new music interwoven with older songs such as “Ohio,” “Crying,” “Christy Ellen Francis,” “These Ships,” “Small Of My Heart,” “Ransom” and “Come As You Are,” the latter being my personal gateway song to the band.

The room was filled with a very attentive crowd that was extremely receptive and engaged, due in part to the venue, but mostly due to Madison Violet’s nearly twenty years of live performing during which they’ve clearly learned how to take fans through a range of emotions.

The evening brought several surprises, the first of which came when they debuted a reinterpretation of the Rolling Stones’ “Wild Horses” featuring an incredible violin arrangement by Lisa. Rolling Stones fans be damned, but I now prefer it to the original.

Madison Violet also skillfully pulled at the heartstrings when relating stories behind songs about the opioid crisis, grandmothers almost making it to their 101st birthday, hometown pride, writer’s block and the reality of living in a small town in the ’90s after a brother reveals his sexuality.

Other moments brought the right amount of levity – like when the band performed a medley of Beyonce’s “Daddy Lessons” and Hall & Oates’ “Maneater,” or when they pulled out the traditional song “Cindy Cindy” then morphed it with the theme song from the ’70s sitcom The Jeffersons.

The final song was “Come As You Are” from 2011’s The Good In Goodbye, which quickly turned into a huge singalong with fans clapping along, then concluded with an enthusiastic standing ovation.

However, the Hugh’s Room Live crowd wasn’t going to let Madison Violet off that easily and demanded an encore, which the band graciously obliged by returning to the stage to perform “Lauralee” from 2009’s No Fool For Trying, a request from an audience member. Up next was the title track from Everything’s Shifting that turned into an absolutely hilarious medley featuring “Informer” by Snow and “No Scrubs” by TLC.

The finale came when the trio of musicians unplugged, left the stage and performed standing amid the dining tables in the middle of the venue. Fans, now completely enthralled, were treated to a Madison Violet karaoke version of Four Non Blondes’ classic hit “What’s Up?” Needless to say, it quickly and easily turned into the biggest sing-along of the evening.

Yup, nothing really compares to seeing a band live!

If you haven’t already, grab yourself of copy of Madison Violet’s Everything’s Shifting. Better yet, go see them live then grab an autographed copy after the show. Trust me, you’ll be glad you did!

Linda McRae – ‘Dimming of the Day’