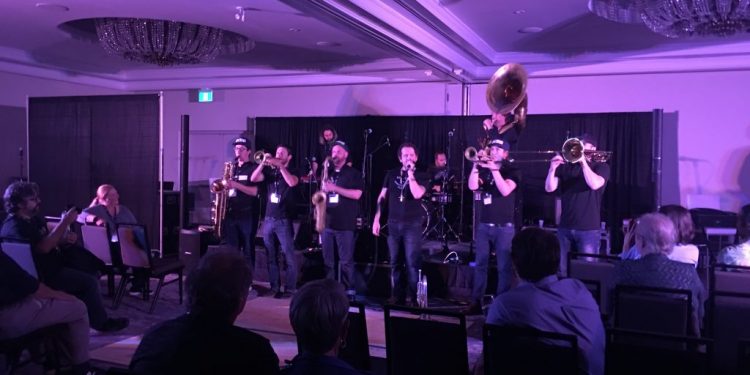 6:25 p.m.: I’ve been lured back into the Vista Salon by the sounds of a boisterous brass band that seems way too fun to miss. Earlier, I had settled in to enjoy the gentle country-folk sounds of Beausejour, the new collaboration between two francophone singer-songwriters from the east and west of the country respectively: Jocelyn Baribeau and Danny Boudreau. At the end of their set, I slipped out to phone my girlfriend, who I’ve been missing pretty badly while I’ve been here. But now I’m back in the room watching what is easily the most fun thing I’ve seen all weekend: Winnipeg’s Dirty Catfish Brass Band. It’s pretty much exactly what the name suggests: bombastic New Orleans-style brass band music that has the crowd dancing in the back of the room. They close their set by parading through the aisles while playing “When The Saints go Marching In,” after which the crowd erupts into the first standing ovation I’ve seen this whole conference. Come to think of it, that’s really saying something.

6:37 p.m.: Coco Méliès are doing something really cool on stage. The three members – two guitarists and a mandolinist – are gathered around a microphone bluegrass style, but they’re not playing bluegrass. They’re playing songs that have the strong indie pop aesthetic of acts like Fun (You know, “Toniiiiiight we are young”). By that I mean there are lots of “la la la” refrains and super catchy choruses belted out in loud three-part harmonies, and it’s beautiful stuff. They play a varied set that ranges from tender slow songs to more up-tempo numbers, and they say very little to the audience because “Otherwise we’ll talk too much,” Francesca Como says. “Especially him,” she adds, pointing to David Méliès. 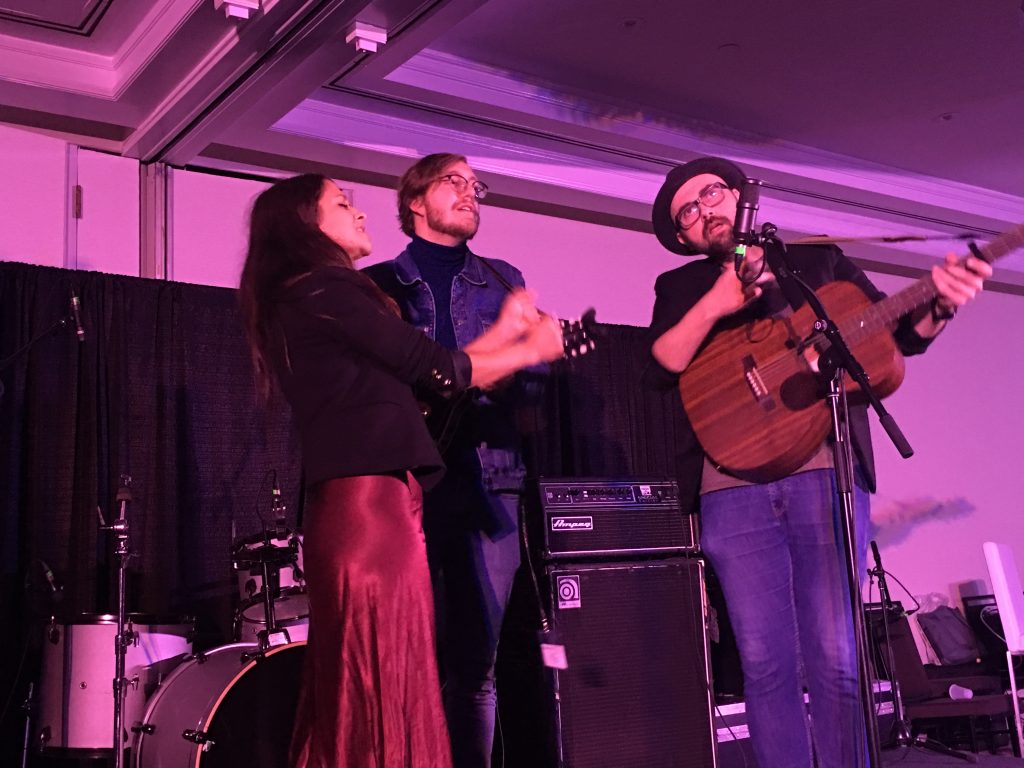 8:33 p.m.: If you see a straight-up singer-songwriter in an official showcase slot, you know they’re probably going to be good because, let’s face it, it’s pretty hard to stand out in that crowd. Well, we’re about three minutes into Kalon Hart‘s set, and I can feel the hair standing up all over my body.

“Down, down in my heart / There is a river / With no shade / I cut down the forest / I needed the lumber,” he’s singing on a new song called “There is a River.”

“Cause I’m building a bridge / So I can cross over / I’m not trying to be alone / Just wait for me / A little while longer.”

There’s a rough smart phone video on YouTube of him singing this at Karma Wine Bar in Windsor. I highly recommend checking it out.

Kalon, whose real name is Rob Teehan, has already had an impressive career as a tuba player with the highly esteemed Lemon Bucket Orkestra, but about four years ago, the story goes, he moved to Los Angeles to do film and TV scores, and, after arriving, he experienced a spiritual awakening and started working through the depression and personal baggage he’d been carrying around with him up to that point. Now he’s answered his heart’s call to write songs that, according to his bio, “bring people back to their hearts through emotional mastery and re-connection to the earth.” That certainly syncs well with my first impression of him. Shout out to Joel Schwartz too for the freaking gorgeous guitar accompaniment.

9:04 p.m.: Marie Clo is a bilingual artist from eastern Ontario, which means she’s neither anglophone nor Quebecois, she points out to the audience. 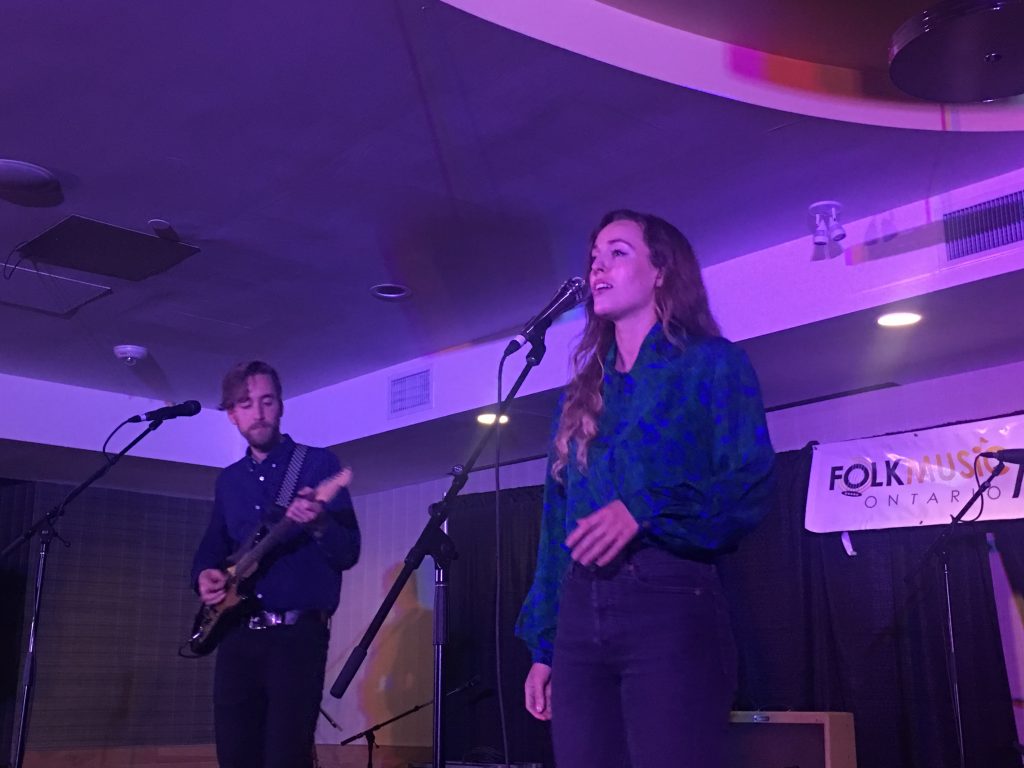 “Life’s been a little bit hard identity-wise,” she says laughing. “Franco Ontarian is getting cooler.”

Jan Hall, who introduced Marie, said her sound mixes francophone pop with Quebecois folk, but this set is definitely on the pop side of things – loud drums, electric guitar and synth. That’s not a bad thing. She’s got a great voice for pop and some catchy songs, and she’s got a personality on stage that’s fun and sincere at the same time. At one point she talks about how her new album was inspired by her decision to return to Canada after eight years of marriage to a professional hockey player whose career took them all over the world – but ultimately stifled her ability to pursue her own art.

9:55 p.m.: Hannah Shira Naiman is playing a lovely set of old time-inspired numbers, accompanied by an ace band that includes Rachel Melas on upright bass and Hannah’s dad, Arnie Naiman, on banjo. Hannah is showcasing her skills on both banjo and fiddle while singing in crystal clear tones. She closes with a lovely original inspired by her young daughter, which sounds credibly close to a trad number.

10:17 p.m.: Kolonien are on the stage now. They are “a family band from Sweden,” says guitarist and singer Arvid Rask. “Good luck trying to figure out who is who in this family business.”

Kolonien may be Swedish but there’s not a nykelharpa to be seen in this ensemble. Their sound is contemporary catchy folk-pop with awesome harmonies that actually sound a little Beatlesque or Monkees-like. But then Anna Möller lets loose on a fiddle solo, and that traditional Scandinavian folk sound comes shining through.

10:50 p.m.: The last time I saw Adrian Sutherland, he was fronting Midnight Shine at the Moose n’ Fiddle Festival in the midst of a rainstorm. He was recovering from a respiratory infection of some kind, and the sound was being super glitchy. Oh, and we had to leave the festival before the end or else the shuttle back to our campsite would leave without us. So we had to miss his closing performance of Neil Young’s “Heart of Gold,” which he sings partly in Cree. And yet, it was still great. 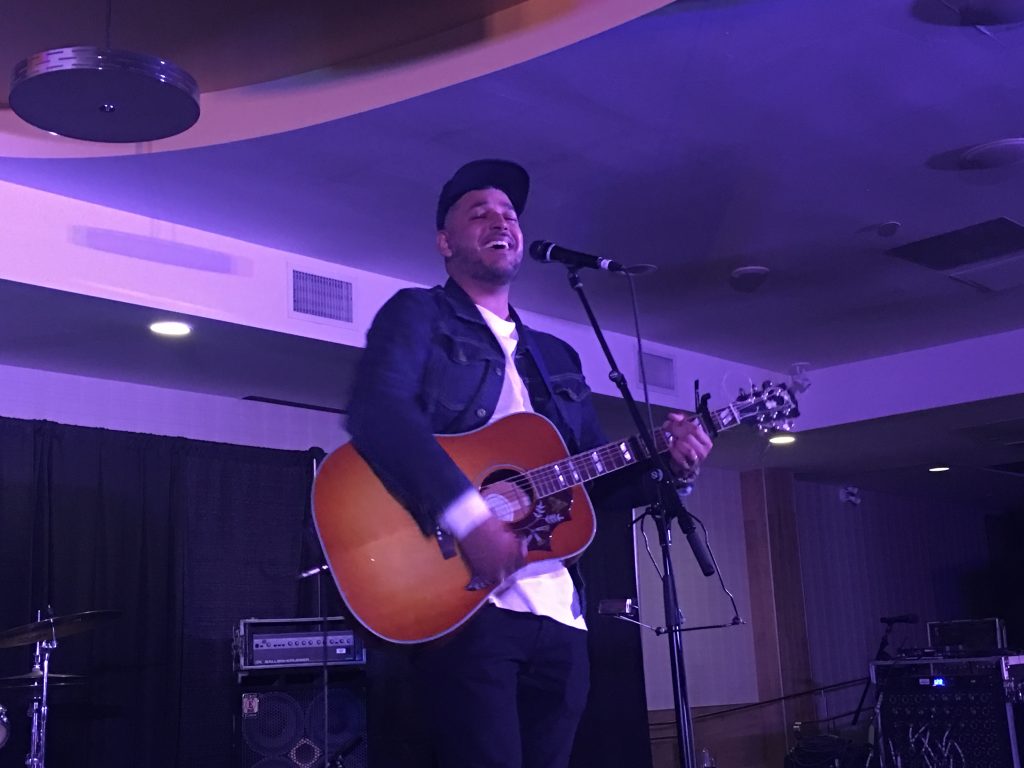 Tonight, I’ve just finished watching Adrian perform solo with acoustic guitar in a heated indoor conference room with good sound. And honestly, between the previous live experience and the fact that Midnight Shine’s records are fairly produced, I had never until this moment realized what a gorgeous voice Adrian has. He opened the set with Midnight Shine’s “Sister Love” and “Northern Man,” both of which really showcased his range and versatility. And he closed with “Heart of Gold,” which I got to see this time. It was gorgeous. Adrian is working on new material for a solo album these days. Honestly, I can’t wait to hear it.

10:54 p.m.: This year has been a hard one for the Fitzgerald family, Kerry Fitzgerald of the fiddling, step-dancing ensemble The Fitzgeralds tells the audience. Tragedy struck in July when sister Julie turned 30. How would she fair in the dance-off section of the show, Kerry questioned. Just fine, it seems, as the two sisters begin tearing it up, one wearing a Superman shirt and one a Batman shirt.

The Fitzgeralds are offspring of the Ottawa Valley fiddling and stepdancing tradition – Julie is a two-time Canadian Grand Masters Fiddle champion and a two-time open step-dance champion. Brother Tom is also a Canadian Grand Masters Fiddle Champion – and these guys give veteran Grand Masters alumnus-turned international touring artist April Verch a run for her money in the showmanship department. Playing the fiddle and stepdancing at the same time? Pfft. That was the Fitzgeralds just warming up. Then Kerry flips over her fiddle so the frets are facing her feet and carries on fiddling and step dancing like that. Then Julie, who plays with the fiddle on her left shoulder moves it over to her right and plays a tune like that. Then she puts a fiddle in each arm and works the frets on both while Kerry and Tom bow and she does foot percussion.

The gauntlet has been thrown down. 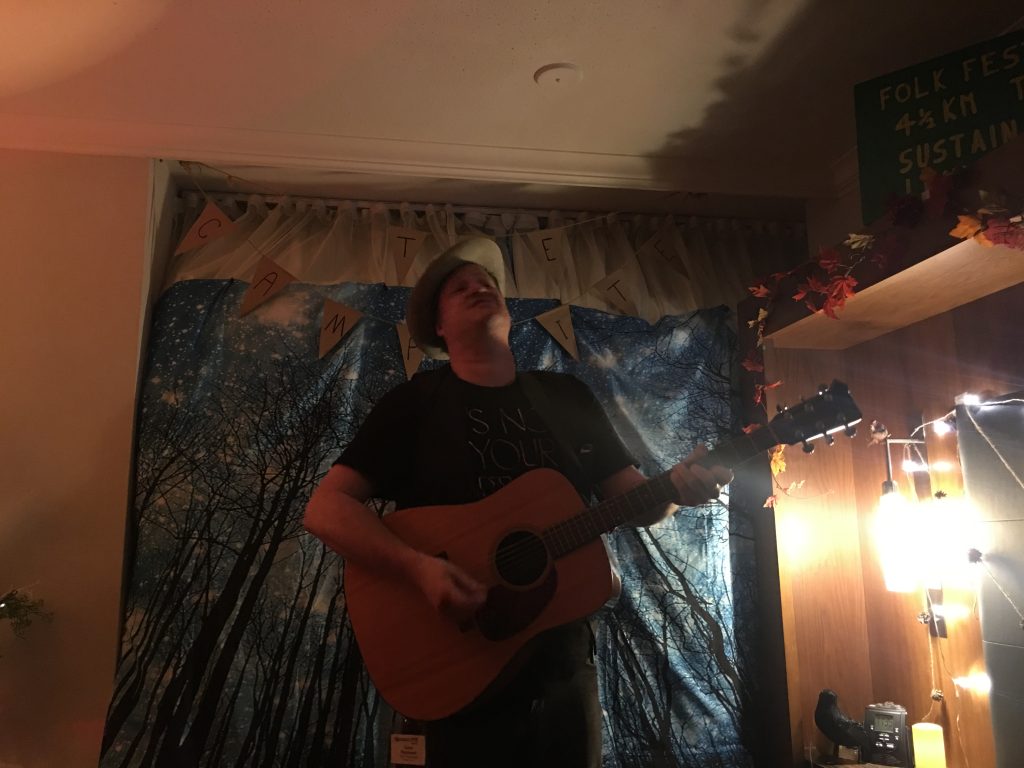 11:50 p.m.: I’ve never seen Corin Raymond live before, so I decide to rectify this situation by attending his 11:30 set in the Campsite suite. Lots of people, including Corin, have arrived early, so he breaks into – I don’t know – a preshowcase showcase? He performs “Hard on Things” and his cover of Raghu Lokanathan’s “Fucking Genius” before starting his official set with a couple of numbers off his new album. The assembled crowd is clearly made up of long-time fans and friends who know all the words to the songs, so there’s a lot of love and singing along in the room. Corin ends his set in the most perfect way imaginable: with “There Will Always be a Small Time,” his ode to the working musicians playing house band gigs and small shows to make a living without ever having a hit. In other words, it’s an ode to everyone here pretty much.

12:10 p.m.: I’m tucked into a corner in the quiet end of the hallway of the showcase floor typing up these here reviews when Denise MacKay of 100 Mile House walks up and fills my empty cup from the Campsite with wine. Thanks, Denise! They’re playing in the Campsite in about 20 minutes. I think this means I’m going.

12:45 p.m.: 100 Mile House are sounding fantastic in the Campsite, and I’m not just saying that because they gave me booze – unless they slipped a hallucinogen into it. But I don’t think they did because I caught the last song of their official showcase set earlier, and they sounded amazing there too. Pete Stone and the aforementioned Denise MacKay sing in beautiful, subtle harmonies, and the songwriting is so strong that they can sing a string of intimate down-tempo numbers and keep you riveted. To top it all off, they’ve been showcasing with a four-piece string ensemble comprised of violinist Kelly LeFaive (also of Georgian Bay), cellist Beth Silver, violist Rachael Cardiello, and mandolinist Brennan Cameron. The sounds is just gorgeous.

1:57 a.m.: After stopping into the Music Ontario suite quickly to see Nick Sherman, whose new album I’m eagerly anticipating, I head upstairs to get ready for bed. Sadly, I must be up at 6 a.m. to catch my plane. Honestly, I’d actually been feeling a little bit blue earlier – writing about a music conference is a much less social activity than all the networking, holding meetings and greeting old friends that I used to do here, so I’d been missing that sense of “family reunion” that often comes with this event – but listening to Corin Raymond sing “There Will Always Be a Small Time” reignited the sense of magic for me, and I spent the rest of the night basking in the atmosphere and wishing I could stay up til 3 a.m. to shut the place down. It’s not happening, but I’m heading home filled with love for this music community I’ve been honoured to be a part of for nearly 25 years – one that continues to surprise me with amazing new talents year after year.

Linda McRae – ‘Dimming of the Day’