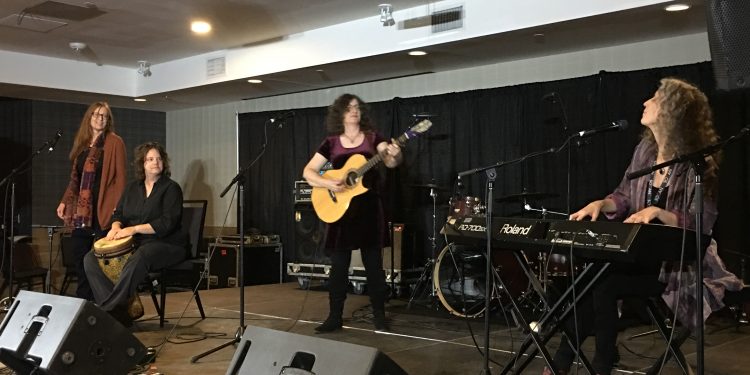 12:10 p.m.: I settle into the York Ballroom as Sarah Hiltz is setting up her song “Retching in the Wings,” inspired by Sinead O’Connor’s performance of Bob Marley’s “War” at a 1992 Bob Dylan Tribute at Madison Square Gardens – just days after famously tearing up a picture of the Pope on Saturday Night Live. The redo of the Marley number was an impromptu response to boos from the crowd over her SNL performance. Sarah explains to the crowd, as she did to me a few days ago, that the sight of Sinead standing defiantly in front of the audience then appearing to dry-heave in the arms of Kris Kristopherson after walking off stage moments later, reminded her of her own inner conflict at facing anger when standing up for what she believes is right.

Sarah won the Folk Music Ontario Songs from the Heart award for political music for the piece, and she is performing right now as part of the award-winner’s showcase, a rapid-fire event that will see each winner perform just one or two numbers, including the winning song. A couple of the winners were not able to make it here, but most are here, so buckle up; there are going to be a lot of acts to sample in a short period of time.

12:19 p.m.: “It’s OK; you already won,” jokes a voice from the crowd as global folk award-winner Jorge Miguel halts his winning song, “Sin Verguenza,” a few bars in to deal with a sound issue. After a quick fix, he launches into it a second time, and this time, the guitar is coming in loud and clear. The piece sounds about ten times more powerful on stage than it does on the rough mix he recorded about a year ago and shared with us at Roots Music Canada. And for all of Jorge’s self-effacing jokes about his perceived lack of skill as a vocalist, the truth is, you’d never know by listening to him that this is his first kick at the can. He’s been playing Flamenco guitar for more than 25 years. He’s got the soul of it running through his veins now. I can’t profess to be a Flamenco conoisseur, but he sounds great to me. And it sure is great to see him playing on stage with his now-teenage son, Iggy – who I have to say, has great hair.

12:37 p.m.: Jane Lewis of Gathering Sparks has just given a shout-out to all the climate marchers taking to the streets today while intro’ing their award-winning number, “Bringing in the Light,” which is once again giving me goosebumps. Katherine Wheatley has joined them for the number, turning it into a full three-part harmony affair. The song won the award in the singer-songwriter category, and it’s not hard to hear why. It employs a well-worn metaphor – light in darkness – transposed onto a simple, memorable melody that I imagine we might all find ourselves singing to ourselves a few months from now.

1:00 p.m.: Eric Stein’s Jewish Balkan folk fusion band – it’s tough to find the right descriptor for them – Beyond the Pale has just finished performing two numbers, including Eric’s piece, “The Whole Thing,” which won the award for instrumental music. Now Julian Taylor is up on stage solo performing a killer soul-drenched rendition of his blues award-winning song “Gone.” But the first thing he did when he got up there was credit his cowriters. Two thumbs up, Julian; one for the song and one for being such a great guy.

1:08 p.m.: “I didn’t name myself ‘the lyric doctor,’” Danielle Knibbe tells the audience after workshop host Magoo introduces her as such. “That would be weird.”

I’ve been enjoying the songs that Danielle and her entourage have been submitting to Roots Music Canada over the past year. She has an expressive, sometimes haunting voice. The songs have all been really strong, and the award-winner she’s performing now, “Absence of You,” is my favourite of the bunch so far – as I wrote in my piece on the FMO award-winners earlier this week. What I didn’t know until this moment is that Danielle is also a heck of an entertanier, and the story behind this stirring love song is – well – actually kind of hilarious: she’d never written a love song because she was an awkward teenager who hadn’t had much experience with love. And when she did fall in love, it was with a bandmate, so that felt awkward. But then people started questioning whether her relationship with Connor Walsh was in trouble because, after all, she was a songwriter who hadn’t written a song for him yet. What was up with that? So finally. she used the occasion of a songwriting workshop in Banff to come up with one. She played it for him, and a month later they were engaged, she said. What’s more, a friend used the song to attract a partner too!

“This is why they give you eight minutes for one song,” Danielle jokes after finishing the story – before launching into a flawless rendition of the number. Festival folks, have you booked Danielle yet?

1:23 p.m.: The winner of these year’s Colleen Peterson Songwriting Award, Suzanne Jarvie, is on stage now with her daughter on backing vocals and Burke Caroll on lap steel, and man does she ever sound good. She just sang “In the Clear,” the title track from her new album, and now she’s singing “All in Place” – about anxiety, fear and self-realization and how the first two get in the way of the last, she explains. Suzanne has a rich Americana voice and a great set of songs. It’s hard to believe she’s only been at this for five years – and only after a family tragedy opened up a well-spring of creativity in her (more on that in a separate story to come!)

1:35 p.m.: Rosie and the Riveters have taken the stage awash in black and white in every pattern under the sun: stripes, polkadots, and I believe the other one is called dog tooth.

“There’s a new award this year. It’s called Best-Dressed. We take it every year,” Allyson Reigh jokes with the audience. “It’s not hard at folk conferences.”

After a quick technical tune-up, they launch into a boisterous rendition of “Let ’em Talk” that’s every bit as polished live as it is on record. No suprises here. These gals were strong when I saw them at Folk Alliance, and they’re just as strong now.

1:51 p.m.: “You’re a lion / ain’t that dandy. You’re a lion / ain’t that dandy,” Matt Gerber sings while strumming away on a ukulele and punctuating the song with growls and roars. This is actually the start of the family showcase here at the conference, but I missed Matt when he played first during the award-winner’s showcase, so I’ve stuck around to catch a couple of songs now. Matt won the award for children’s music for his song “Buzz Off, Mosquito,” but seriously, how can anyone not have fun being this silly? By the end of the number, he’s got the audience singing along. There aren’t a lot of people in the room at this point, but the ones that are here are getting a kick out of it.

2:05 p.m.: With the award-winner’s showcase over, I’m off to meet Suzanne Jarvie for a cup of tea and a chat. Then it’s time to fuel up for tonight’s marathon evening of music.