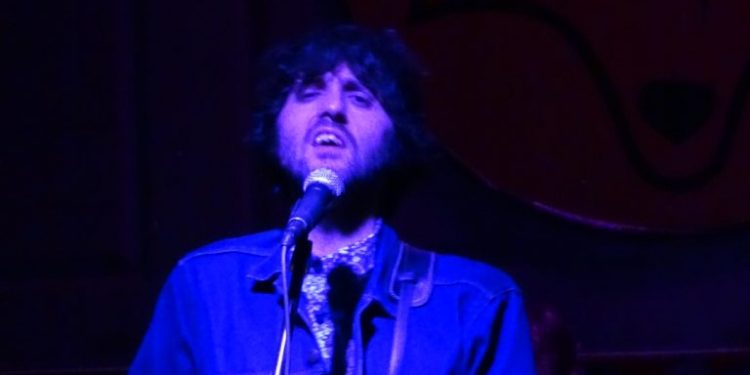 I was so impressed by the level of talent that Inside The Music was able to book for the inaugural Troubadour Festival in 2018 (Joel Plaskett Emergency, Emm Gryner, Ariana Gillis, Ron Hawkins & The Do Good Assassins, Chris Coole etc) but I wasn’t able to get the weekend off. This year things would be different as the stars aligned and my days off coincided with the two-day music festival that took place this past weekend in Barrie, ON.

While I could’ve stayed in an Airbnb within walking distance of the festival’s downtown Barrie venues, I decided to spend the weekend at one of the campgrounds conveniently located less than a 20-minute drive away. So, I packed up our trusty travel trailer, Eileen, and hit the highway for the two-hour drive from Cambridge to Barrie.

I elected to start the opening night off at the Troubadour Festival’s St. Andrew’s Presbyterian Church venue. Doors opened at 7 p.m., and the festival even set up a bar in the church basement so fans could enjoy a drink before things got underway in the church proper. The show started at 8 p.m. with a cross-country musical road trip that started on the West Coast with Vancouver-based singer-songwriter Joshua Hyslop. While I was a fan of “What Have I Done?” the whispery single featuring Anna Scouten from Joshua’s critically acclaimed 2012 album Where The Mountain Meets The Valley, I’d yet to see him in concert. Joshua performed solo, and I was instantly mesmerized by the skill of his fingerpicking and the quality of his songwriting, featuring honest lyrics and straight-up vocals. It was also thrilling to hear a few songs from Joshua’s upcoming album. To close his set he unplugged his guitar, stepped away from the microphone and performed his last song acoustically. It was a beautiful moment and absolutely fitting given the venue. Joshua Hyslop earned himself a fan for life, and I will definitely see him again soon.

The cross-country musical road trip continued eastward, as it featured Ontario’s Harrow Fair, the dynamic duo comprised of Miranda Mulholland and Andrew Penner. I’m a big fan of the group, having seen them perform several times before. While a recording of the Harrow Fair pig auction played, Miranda and Andrew took the stage and opened their set with “How Cold” from Call To Arms, their debut album from 2016. Harrow Fair was totally on fire throughout their entire set! They sounded better than ever, and it was their best performance I’ve seen so far. The duo closed the set with an absolutely beautiful rendition of The Rankin Family’s “Fare Thee Well Love,” leaving the crowd momentarily dazed before breaking into resounding applause. 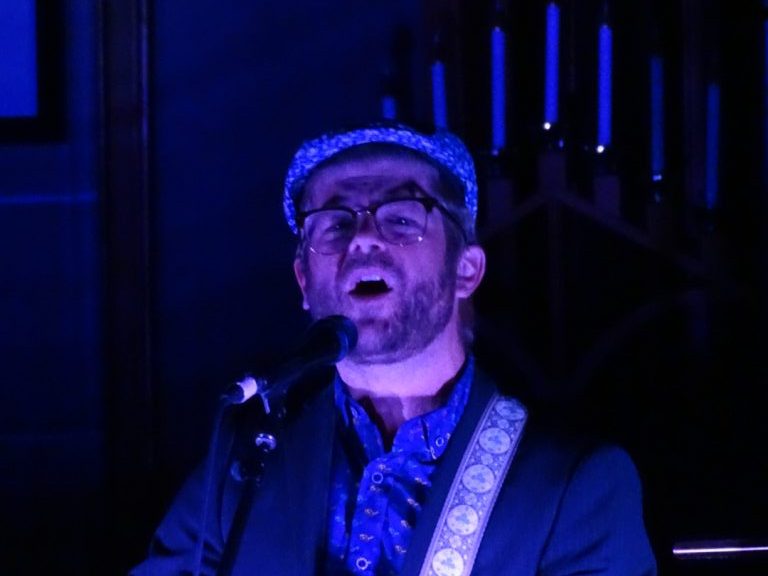 The cross-country musical road trip concluded on the east coast with Chris Luedecke, a.k.a. Old Man Luedecke, from Chester, NS. I’m a big Joel Plaskett fan, and when your idol recommends an artist, you pay attention. Old Man Luedecke had been on my must-see list ever since Joel’s recommendation, so it was exciting to be able to see him for the first time, and in such a beautiful venue. Old Man Luedecke performed solo with a banjo and an acoustic guitar. His set featured several songs off his latest album, Easy Money, some old favourites, and requests from the crowd, all accompanied by hilarious stage banter and great stories. Old Man Luedecke easily had the crowd singing along to many of his songs, even those of us hearing them for the first time. I was particularly struck by his ability to write songs featuring very clever lyrics that, when combined with the right melody, make them accessible to any listener.

Having finished my cross-country musical road trip, I left the church and walked just two blocks to the next venue, Donaleigh’s Temple Lounge, a sprawling Irish pub located along the busy Dunlop Street strip in downtown Barrie. I caught the last two songs of Taylor Knox’s set, then Ellevator took the stage. Thankfully it was located in a separate room at the back of the noisy pub. I was only able to catch part of the Hamilton, ON band’s set at the Hillside Festival in July, and I knew I needed to see them again to truly appreciate their sound. I don’t know what it was about their Troubadour Festival set, but I was entranced by lead singer Nabi Sue Bersche’s performance. She had a strength that lured the listener into the music and held you captive in an atmosphere filled with the best parts of indie rock, thanks to a very tight band. I will definitely see them again!

My last stop for the night was the Foxx Lounge Rock Bar, an intimate and uncompromising rock venue located just a few doors down from Donaleigh’s. Even though it was way past a middle-aged man’s bedtime, I just had to see Espanola’s set. I knew it was Aaron Goldstein’s band, and I would go see any act that he was part of. (Aaron has played with almost everyone. Look him up!) When I arrived, local band The Noolands were wrapping up their set. As I wasn’t familiar with Aaron’s rock band, I was shocked to see Blue Rodeo’s talented drummer, Glenn Milchem, behind the kit. (Glenn has also played with everyone. Look him up!) Espanola put on a great late-night rock show in a grungy, intimate rock venue perfectly suited to their music. The highlight for me was being in such proximity to Glenn Milchem’s fierce drumming style. Now I have to go see any act that he’s part of! 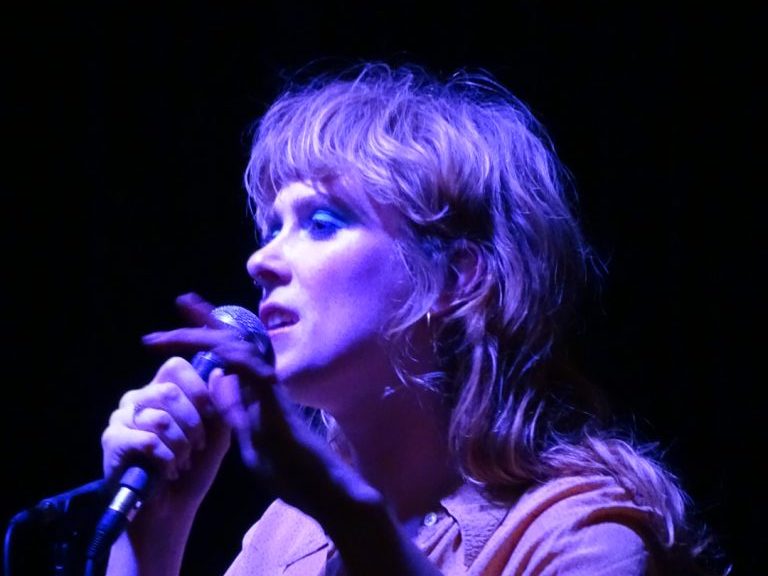 For me, day two started on the outskirts of Barrie at the beautiful Heritage Estate Winery & Cidery. For those of you that are familiar with Jackson Triggs’ Winery, picture a smaller, temporary version of their outdoor amphitheatre. Local musician Jess Bowman kicked things off followed by Dani Strong and her band. Next up was country artist Andrew Hyatt and his band. The Troubadour Festival helps raise money for Redwood Park Communities, a local charity that aims to provide hope and housing to those in need, and all three acts had performed in support of the charity in previous years. The headliners that evening were the soon-to-be members of the Canadian Music Hall of Fame, the Cowboy Junkies. I’m a big fan of the Cowboy Junkies, and I was so excited to see them in such a cool setting. The Junkies started their set with a lingering intro to “Sweet Jane” that concluded with lead singer Margo Timmins effectively holding onto the audience’s anticipation for as long as she could by tilting her head back then lowering it to the mic to release the first lyric. The crowd loved it! I’ve seen the Junkies several times in several different settings, and I think this was the most animated I’d ever seen Margo. Usually seated for the majority of those performances, this time Margo was up and dancing and way more physically expressive than I’d ever seen her. The band closed their set with “Misguided Angel,” a performance that easily motivated several couples to spontaneously slow dance. The set concluded with a standing ovation from the crowd and demands for an encore, which the Junkies graciously obliged by returning to the stage to perform their The Trinity Session album version of the Patsy Cline song “Walkin’ After Midnight.” It was the best Cowboy Junkies show I’d ever seen!

While trying to come down from that high, I drove back to downtown Barrie to catch three acts at Mavrick’s Music Hall. First up was the amazing singer-songwriter Lydia Persaud. She was accompanied by the talented Dean Drouillard (Dean has played with almost everyone. Look him up!) on electric guitar. I’ve been fortunate enough to see Lydia twice before, and her vocal prowess and uncanny ability to write stunningly beautiful songs still leave me breathless. Her set was simply perfection! Both “Honey Child” and “Low Light,” from her debut full-length album, Let Me Show You, are mega-hits!

Next up was The East Pointers. The Juno Award-winning trio, featuring a keyboardist originally from Barrie and a fiddler/singer and a banjoist from PEI, quickly and easily got the music hall jumpin’. Their set was a mix of well-crafted songs and what seemed like extended east-coast-meets-dance-music instrumentals that had several people showing off their finest moves near the front of the stage. When I chatted with Lydia Persaud at the merch table after her set she’d advised me that I’d enjoy The East Pointers, and she was right! A definite must-see again.

Matt Andersen was the final act at Mavrick’s Music Hall, and while I’m not an architect, I think they might want to have someone inspect the building because I’m pretty sure he blew the roof right off the place. Only a true professional and utterly talented artist such as Matt Andersen can walk on stage solo, sit down in a chair with just one acoustic guitar, and not a single effects pedal, and blow away an entire music hall full of people with their music. Everything about Matt Andersen’s set was amazing! He’s a joy to hear and a joy to watch, and he’s also hilarious!

But, I couldn’t finish my night off there! My last stop and final performance at the Troubadour Festival was Jerry Leger & the Situation at the Foxx Lounge Rock Bar. I came across Jerry’s 2014 album, Early Riser, at a record store in Saint John, NB a few years ago, and I bought it simply because Cowboy Junkies’ Michael Timmins produced it, and I make an effort to support Canadian artists. Since then Jerry’s been on my must-see list, but the Troubadour Festival would be my first opportunity to see him live. Jerry and his band did not disappoint! The crowd was treated to an extended set that featured songs from Jerry’s extensive back catalogue as well as a few songs from his upcoming album, Time Out For Tomorrow. While I have been enjoying listening to Jerry’s albums at home, nothing compares to seeing an artist live, and it couldn’t be truer for Jerry Leger and his talented band, The Situation. It was a tight yet fun set that featured Jerry’s unique vocals deftly expressing some of the best songwriting this country has to offer. I’d highly recommend seeing him live!

I thoroughly enjoyed my first multi-venue mainly indoor festival. As with any multi-stage outdoor festival, I couldn’t see it all, and I did miss a few acts that I would’ve liked to have seen, specifically the Songwriter Series featuring Danny Michel, Damhnait Doyle and more, plus Moscow Apartment’s set. The staff and volunteers at Troubadour Festival were very kind and helpful and should be commended for what they’re doing for the Barrie live music scene and the charity, Redwood Park Communities. Through discussions with several patrons, staff and volunteers, I learned that this year’s event was busier than last year’s, and I can only hope that they continue their upward momentum. Given the sheer level of talent that I could see in one city over just two days, I wouldn’t hesitate to drive from Cambridge to Barrie next year. Here’s hoping my work schedule cooperates!