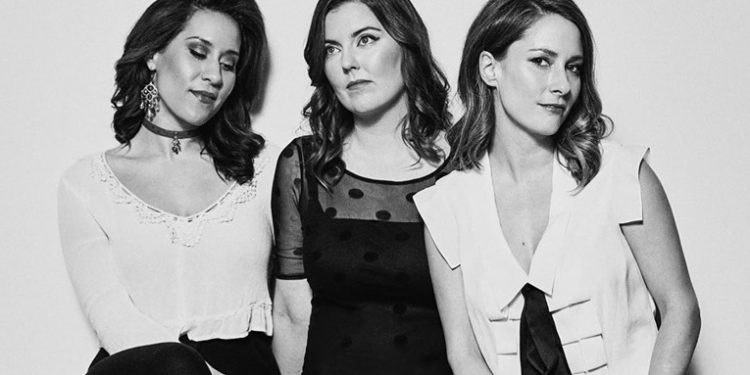 Known for their soulful three-part harmonies, West Coast Music Award winners Sweet Alibi have shared their folk roots, and pop infused music with listeners across North America and Europe since 2009. Combining the distinct and complementary voices of Jess Rae Ayre, Amber Nielsen and Michelle Anderson – and joined by Alasdair Dunlop on bass and Sandy Fernandez on drums – their music has garnered national accolades and awards and has been featured on MTV Canada and CMT. It has also received major radio play on college/community and satellite stations, with several songs in the top 20 of CBC Radio 2’s national charts.

On Friday, they release their brand new single, “Confetti,” and we’re super stoked to be premiering it here on Roots Music Canada today.

Here’s what the band says about the song.

“Years ago while driving with a friend, we were listening to CBC radio, and between songs, Rich Terfry amusingly read a headline. It was about an Austrian woman who cut up her $1.1 million life savings just before she passed away. A collection of shredded money was found strewn across her bed in her retirement home. I turned to my friend and said, “It would be like confetti made of money.” He chuckled and said, “Confetti at her funeral.” I wrote it down in my notes and forgot about it. Three years later, my grandmother was diagnosed with cancer and given a fleeting amount of time to live. In the last three months of her life, a lot of my family started acting appallingly greedy by trying to get her to rewrite her will and cut out half of the family from receiving any inheritance. My grandma was pretty disappointed with the silliness of everyone’s behavior. It took me back to the story of the woman from Austria, and I sympathized with how she was likely fed up with how her offspring put money before family. Seeing first-hand how weird things can get around death and money, the song pretty much wrote itself.”