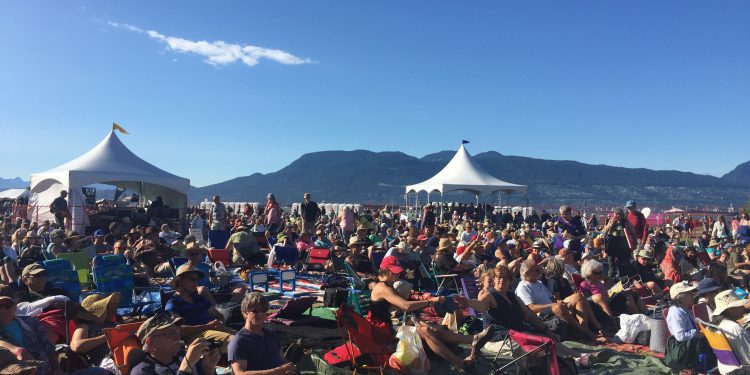 Jericho Beach is possibly one of the most beautiful festival locations in the world. Photo by Deborah Holland.

Leslie Alexander wrote this piece a few years ago and published it in BC Musician Magazine.  She generously agreed to share it with us here at Roots Music Canada, and we’re thrilled to be able to share it with you.  It’s the perfect post festival-season reflection for artists.

When autumn leaves begin to fall, the days gone by are of gumboot helicopters whirling colorfully to the sound of music festivals everywhere. But as the last falafel is eaten, the last lantern dimmed, and the last note sounded, sending friends reeling deliriously home with their arms around each other singing, musicians everywhere are already wondering what kind of hoops they need to jump through to get on the stage next year. They’re thinking stuff like,

Most of us don’t fall into the latter category. But it doesn’t matter if you once played on a workshop stage in Dunster or headlined the Winnipeg Folk Festival, you always want more festivals on your schedule. Who wouldn’t? The first time I played a festival, I looked around and said to myself, “I want to be doing this every weekend for the rest of my life.” I want to live at a music festival. A gathering of souls for the purpose of music, beauty, and celebration – what better company to keep? What better place to be? There are the chance encounters, the hula hoops, the henna tattoos, the food line-up and the loo line-up; the throat singers, the drum circles, the mad fiddlers and visiting celebrities; the way the sun goes down at just the perfect time to make the music complete – Oh, the legendary jams backstage, the ones where bands get formed, songs get written, and somebody is still playing at dawn. At a music festival, you are in the present. You’re carried along by the knowledge that you are a citizen of a temporary country of like minds.

So by the time the jack-o-lanterns are grinning, we’re all wondering who we should dress up as this year to better impress. It’s time to get festival applications in. After recovering from their summer labours, programming committees are back on the job, trying to figure out who is going to make their next festival amazing. I know my costume has to look good and sound good. I may not always be the best judge of what’s going to work. But all I really want to do is go as myself.

After a summer of music and sun, it takes fortitude to focus and hit the books – that is, the booking. It’s getting cold out, so might as well dust off the old EPK, smarten it up with a new live video, recording, or blog, take a fresh look at my press kit and ask myself seriously, “What are my chances of playing the festivals I want to next year, and how can I maximize those chances?”

I know I need to buckle down and spend a little time on it every day, even though I’d rather be picking apples.

How much money and effort do I put into it? Well, everything I can. I put out a new record. I’ve got a band, and I’ve been touring. I hit up newspapers on the road and hope programmers see the stories. I send my music to radio stations and hope somebody hears a song and wants to book me (it’s happened!).

They say somebody has to hear about something seven times before it really registers – that means I can’t expect my application form and promo material to do all the work. I put as much energy into my music as I can, and I’ll still feel like I don’t do enough. But you gotta get your music out there, even if you have to play crummy rooms and sleep on floors to do it. I tend to keep my expectations low, because then I can be pleasantly surprised. And I have been. Sometimes somebody sees you playing somewhere and says something to somebody on a committee who just got passed your You Tube clip by somebody else who loves it. Bingo. But you can’t win if you don’t play.

I’ve played a few festivals since the day I decided I wanted to live at one, and my dream only comes true for brief shining moments from summer to summer. But I got one of my life’s great lessons at a music festival from a little girl named Jasmine who was trying to teach me to hula-hoop. She could twirl it on her neck, on her arms, and up and down her body without missing a beat. I couldn’t get it for the longest time while she twirled away merrily in her gumboots giving me instructions. Finally the rhythm kicked in, and I got it! I was doing it! It didn’t matter that I was awkward and clumsy in comparison to my eight-year-old coach. I was doing it in my own way. I could get better if I kept trying.

“I’m doing it! I’m doing it!” I yelled in triumph. Instantly the hoop fell to the ground around my ankles. She rolled her eyes, still twirling, and said, “You don’t SAY you’re doing it. You just do it.”

As I stare at my list of festival applications, her words are ringing in my ears.