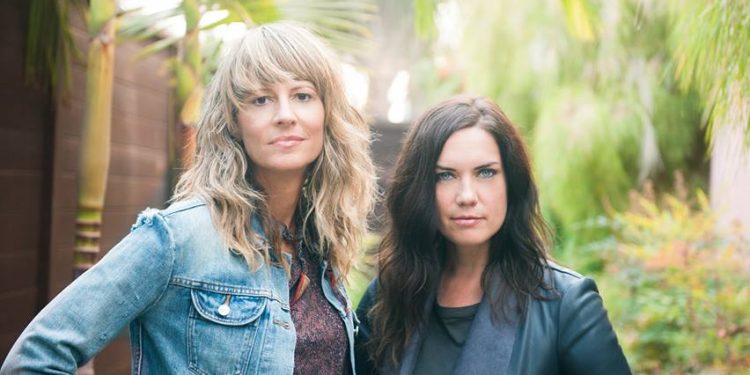 The first time I saw Madison Violet perform, my wife and I were sitting on the grass in front of the mainstage at the Eaglewood Folk Festival with singer-songwriter Mo Kenney. We’d run into Mo as we were heading back to our campsite earlier that day, and she graciously joined us while we took a break from the festival, shared some wine, and chatted about music. We were thrilled to be able to spend some one on one time with one of our favourite artists, but we also didn’t want to miss Madison Violet’s set. Thankfully we soon discovered that Mo too was a fan, so the three of us headed back to the festival in time to share a pizza and sit and enjoy Madison Violet’s powerful mainstage performance. After just one song Mo and I looked at each other and mouthed “Wow” simultaneously. What could be better than sitting in the woods south of Lake Simcoe with one of your idols and listening to a great live act? You sure do remember your first time.

Our next opportunity to see Madison Violet came when we learned that the award-winning duo of Brenley MacEachern and Lisa MacIsaac had been added to the 2017 Kingsville Folk Music Festival lineup and also that we were finally able to attend the festival in Kingsville, ON. We were fortunate enough to catch Madison Violet a number of times over the weekend, and, again, they were so good live.

Therefore, I was thrilled when Brenley and Lisa accepted my offer to review their latest album, Everything’s Shifting. Released digitally and on vinyl and CD in March and recorded, in part, at Daniel Ledwell’s (Jenn Grant, Justin Rutledge, Fortunate Ones) studio on Echo Lake in Nova Scotia, the eleven-song album is the ninth from the duo whose career now spans two decades.

Simply put, Everything’s Shifting is the best album I’ve heard so far this year, and it’s sheer perfection from start to finish. There are so many mega hits on this album that I’m in total disbelief. Madison Violet were completely dialled in with the production of their latest album, and their hard work, determination and 20 years of experience clearly shows. Go buy yourself a copy, and go see them live.

Still on the fence? Let me take you through the album track by track. Hopefully by then you’ll be as excited as I am for what I expect to be one of the best albums of 2019.

Right from the opening track, “Sight of the Sun,” Madison Violet’s Everything’s Shifting sets the tone for an album that features excellent writing, stunning vocals and fantastic arrangements. This inspirational song of hope highlights Brenley MacEachern’s unique vocals, made even better when Lisa MacIsaac joins in to harmonize, then taken to the next level by a beautiful string arrangement that includes Lisa’s short but fantastic violin solo.

“All Over Again” features Lisa MacIsaac on lead vocals and demonstrates Madison Violet’s ability to perform absolutely flawless harmonies. Separately, their vocals are very different, but when they combine, they create this amazing sound that is just fantastic. I can attest to the fact that they are as good live as they are in this recording.

“Tell Me” is a folk country hit. After hearing this song, I expect Madison Violet’s manager regretted their decision to keep this song for themselves instead of offering it to any number of country music’s international super stars. The beautiful melody, awesome guitar, wicked harmonica arrangement and, once again, the combination of Brenley and Lisa’s stunning vocals transport this song into the realm of the mega hit.

“Heart Worth Fixing” is Madison Violet’s protest song on this album. It definitely highlights the power of their writing and ability to tell a story surrounded by perfect instrumental arrangements.

“Seal My Fate” is the next mega hit on Everything’s Shifting. Cleverly, the song starts as a slow burn with Brenley’s lead vocals skillfully expressing the vulnerability in the lyrics accompanied only by guitar. When Lisa joins in on the first chorus the song quickly morphs into an anthem. I listened to the album several times while driving to and from work, and I always listened to this song on max volume. It’s simply awesome, and would be a great opener to their live show.

The slightly more country sounding “Mama Told Me” is the toe-tapper and hand-clapper on the album and features Lisa MacIsaac on lead vocals. One listen and I could picture Madison Violet fans on their feet dancing and easily singing along to the song’s chorus.

In my opinion, “Second Hand Fiction” is the hit single on Everything’s Shifting. The more poppy sounding song is a departure from the tone of previous tracks and the lyrics are smokin.’ If this song isn’t already a hit in clubs, and if it hasn’t been remixed even a few times, I’ll be disappointed. It’s hot. Its sexy. It’s got a great hook. It’s a hit.

“Nobody” is another song that likely cost Madison Violet a few dollars in lost earnings. The song is so well-written and the arrangement is so excellent, it would make almost any artist wish they’d written it. The song opens with a simple but cool guitar lick that eases the listener into Brenley’s soulful lead vocals. Yet another hit on an awesome album.

The title track, “Everything’s Shifting,” is easily the radio hit on the album. It’s got a catchy melody and a more pop-oriented vocal arrangement that I could hear being played on many commercial radio stations.

“Time To Right The Wrong” is the heart-string-puller on the album. I expect it would be hard for some of us to get through a live performance of this powerful song without tearing up. Underlaid with beautiful acoustic and electric guitar, the song highlights Madison Violet’s incredible ability to tell a story through song.

I wouldn’t say that Madison Violet left the best for last, seeing as I’ve raved about almost every song on the album, but “Real Love” is absolute perfection. The production quality is so good, and the song is such a perfect folk-country song, I couldn’t resist playing the song at least twice each time I was listening to the album while I wrote my review. I expect Brenley and Lisa get crowds to join them on the chorus when they perform this song live. In my opinion, it would be the perfect encore. If this wouldn’t leave a crowd wanting more and rushing to the merch table, I don’t think there would be anything more an artist could do.

I look forward to the upcoming award season to see if Everything’s Shifting gets nominated. It sure has my vote!