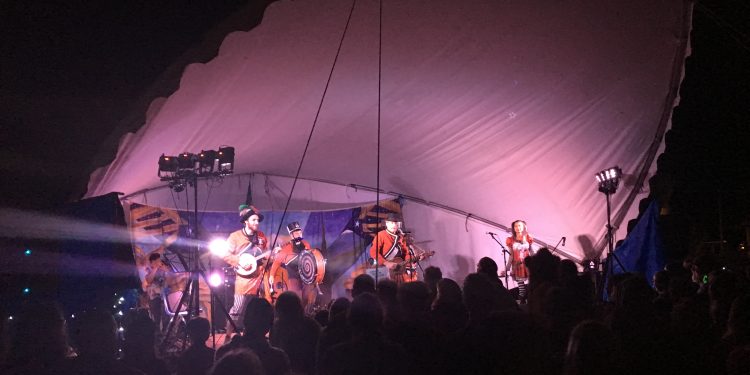 It’s been called “the Bestival.” I’ve heard it said that one visit to ArtsWells Festival of All Things Art can lead to a lifelong habit.

I may be biased; I have long ties to the festival. For many years I lived in the mountain hamlet of Wells, the tiny town that hosts the annual event. In 2004, I was part of the crew that launched the festival, and I volunteered with the production team for many years. My children are festival babies, nursing during production meetings and napping under the box office counter. And since we are being frank, I’ve performed at the festival more times than I can count.

With my kids in tow, and with a few of my own performances scheduled, I may have missed most of the musical highlights of the 16th annual festival. But in spite of a killer line-up of 200 acts, I suspect it’s as much what happens off stage as on that makes ArtsWells what it is.

The otherwise sleepy town of Wells – population about 250 year-round residents – is at the end of Highway 26 nestled in the foothills of the Cariboo Mountains. Drive eight hours due north of Vancouver and take a right at Quesnel. After another hour’s drive through increasingly wilder country, the road reaches Wells, elevation: 4,000 feet. The air is noticeably cooler, thinner, wilder. Something about a long journey reminds me to look around with fresh eyes and shake off the habits of the daily grind.

Remote as it is, Wells has no cell service. Once the initial shock of that wears off, a nearly forgotten means of connection takes hold: people walk slower, make eye contact, and strike up conversations with strangers.

Everything in Wells is within walking distance: stages, camping, food. The adage “small is beautiful” rings true. No festival venue is too big to experience the intimacy of

But for those who arrived earlier in the week, the festival warmed up well before the gates opened on Friday. The week prior included several workshops in the town’s elementary school: performance, song-writing, guitar and kids’ workshops were led by heavy-hitting artists. Instructors this year included Dan Bern, Doug Cox, Linda McRae, and Al Simmons – to name a few. The lead-up week had an unmistakable air of excitement, intense creative focus and a chance to connect with fellow artists. The lines between professionals and hobbyists, seasoned and beginner performers erased, we gathered to learn and push the boundaries of our own artistic practices. I took in Doug Cox’s Intro to Roots Guitar class and, after four days, my fingers were raw but ready to learn more. 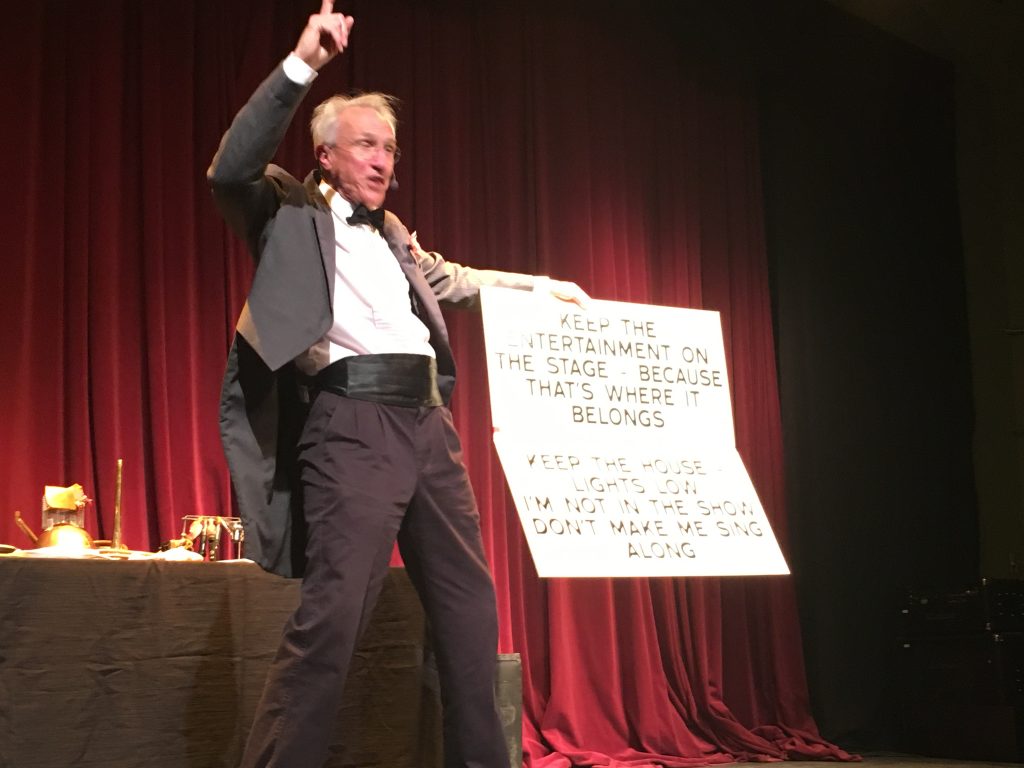 By the time the Thursday evening Instructors’ Concert was over, an acoustic show at the packed 1930’s Sunset Theatre, I was sure the festival weekend couldn’t get much better. Instructors showcased their talents, collaborated playfully, bantered with students and audience, and invited kids to dance on stage.

The atmosphere of that pre-fest week carried on as crowds and performers arrived in town for the main event.

After opening ceremonies, the festival announced its start with a parade through town, this year presenting the first ArtsWells Pride Parade. Several bands and parade performers were held up due to highway troubles, and when the skies delivered a downpour of mountain weather, there was a palpable moment of hesitation. Finally, high-heeled parade marshal Ms. Fondle gave the sign, a lone tuba perforated the din and the parade was underway. In the spirit of the unexpected that marks ArtsWells, a sudden collection of horn players and dancers joined the procession to wind through rain puddles and gravel streets.

My first stop on Saturday morning was the kids’ songwriting workshop performance. This show has become so popular it was moved to the outdoor stage. Instructors Corwin Fox, Maiya Robbie, Kia Kadiri and Shawn Stephenson spent four days coaxing thirty kids to write, record and perform original tunes – spanning the range from ballads, hip hop and pop to a four-part fugue. I challenge any hard-hearted festival-goer to experience this performance unmoved; the courage, pride, and over-whelming encouragement the kids show for one another is matched by their creativity and talent.

I missed the kids’ flash mob finale when I ran off to my first performance, hosting a songwriters’ session, Hometown Songs. I had no idea who I would be sharing the stage with, so I was thrilled to see the prolific Dave Soroka with his guitar and bulging binder of original tunes. As we got ourselves comfortable on the tiny stage, the three ethereal voiced members of Fox Glove squeezed to my left (with their percussionist), and while Dave shared a song, troubadour Orit Shimoni also found a spot onstage.

Our session flew by, and when we went our separate ways I was sure I would get a chance to hang out more with Dave, Orit and the ladies of Fox Glove. But ArtsWells presented so much performance and art during the weekend – add to that the distractions of friends, swimming, exploring the town (and nearby historic Barkerville) – that I didn’t have the chance to catch up with them again. 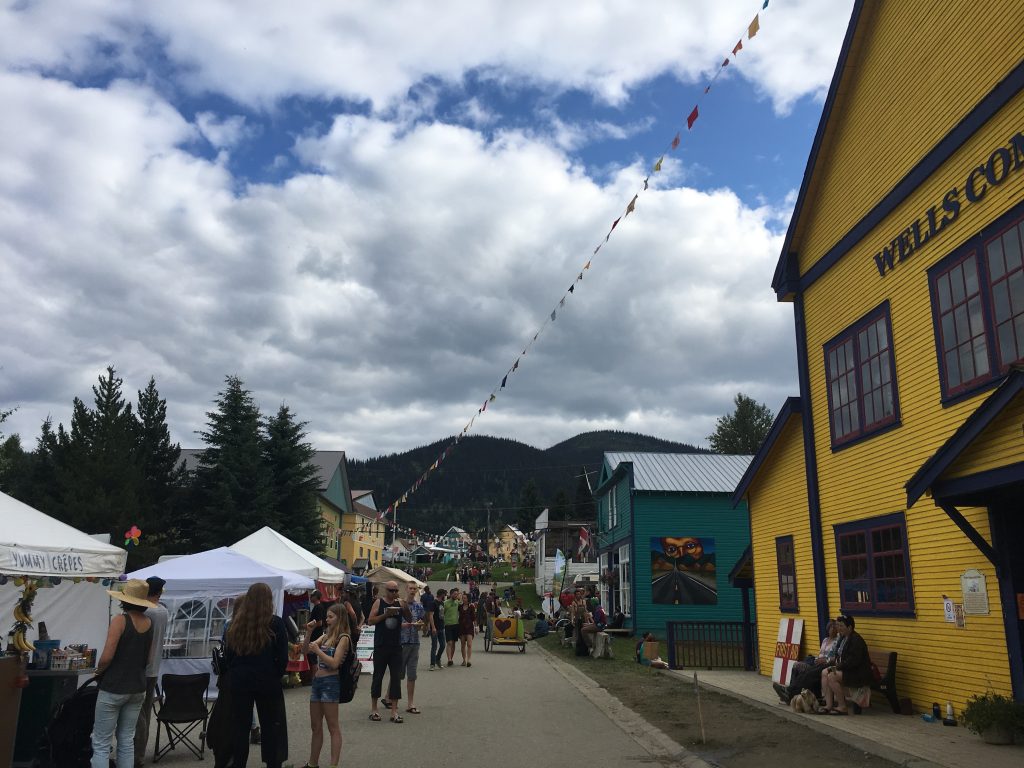 Early on, I made a feeble attempt to plan the shows I wouldn’t miss. But attending the festival as a family, I soon gave up any notion of catching my own wish list sets; I’d settle on getting to my own shows on time. We let the festival unfold, wandering where ever curiousity and unexpected encounters would take us. The performances we caught were precious and diverse: Al Simmons’ uproariously funny performance, Corwin Fox’s raunchier show, Sarah Wheeler’s unexpected killer band set in the main Hall.

Late Sunday night (past our family bedtime) we stopped at the Outdoor Stage to catch the last songs by Snotty Nose Rez Kids. As we stood behind the sound booth – a feeble attempt to offer protection to my kids’ young ears – we could just see the top of the crowd as dancers pulsated in unison to the driving beats. My kids have never witnessed this kind of show. Reasoning to myself that I could explain the cursing and anger of the music later, with the lens of oppression and reclaiming indigenous voice as a good place to start. While I contemplated, Radar – long-time outdoor stage sound tech – spotted us and quickly cleared a perch for my kids in the sound booth. Not only did they have a great perspective of the stage and the crowd, Radar gave them a quick lesson in live sound and lights. If anyone else noticed the stage lights flickering rainbow behind the Snotty Nose Rez Kids, that was at the suggestion of my seven-year-old.

It was with great difficulty we drove out of Wells late the next morning, leaving behind an atmosphere that is rarely found in our daily lives.

Is it the altitude, the location, the small-town vibes or some other force that inevitably delivers a music and art festival filled with unexpected turns, passionate performances, and magical encounters? ArtsWells is that kind of festival: a summer camp for musicians, a family affair welcoming performers and audiences to an unconventional, enchanted and magic-infused reunion. Who knew we missed each other so?

Why Ted Ferris can’t get enough of ...