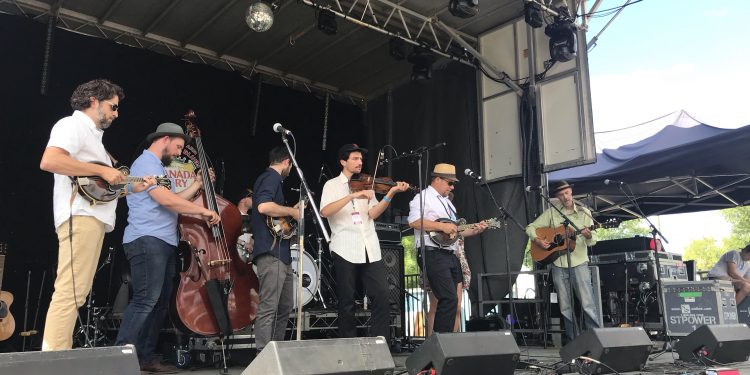 Sunday morning I headed to the gospel show being held at the Shuswap Theatre, three blocks from the festival venue. Two bands were slotted for the gospel show: Tracy Lynn & the Savage Hearts and The Unfaithful Servants. While seemingly representing opposite ends of the gospel spectrum, both bands make use of harmonies in their vocals, so I was hoping for some rich harmonies in some old time gospel songs. I was disappointed on that front, but I did enjoy both bands. Tracy Lynn provided some inspirational music, and The Unfaithful Servants provided some humor and irony.

I had decided that today was the day I was going to devote to checking out workshops. I learned on Saturday that “workshops” were not the audience participation events I had originally envisioned. Musicians did not sit down and teach you how to write a song or how to play a new guitar rift. Workshops are actually the throwing together of musicians from different bands based on a theme or musical genre. Musicians don’t get to sign up for a particular workshop. As a condition of playing at the festival they are told the workshops in which they will participate. The musicians also arrive without preparation or practice to the stage for a workshop. The hope is that magic will happen in the different mixes, and often it does.

I stumbled into my first workshop on Friday afternoon quite by accident. I was at the Barn Stage early in anticipation of hearing The Unfaithful Servants, and Ruthie Foster was hosting a workshop. The workshop was titled What’s Goin’ On and had Ruthie Foster, The Hamiltones and Dawn Pemberton on the stage. It wasn’t until the next day that I realized that group of people was not a “band” because the magic was definitely happening up there.

The first workshop I hit on Sunday was the West Coast Wonders, which put Tonye Aganaba, Valdy, Early Spirit and Luke Wallace on the stage together. The dynamic of this group of musicians was definitely different, and this workshop was more like mini concerts. Each musician would take the mic, play a song, and then step back for another musician to take the mic. There was very little collaboration.

The second workshop was Dawg Days of Summer hosted by Jesse Cobb (The Unfaithful Servants). The Andrew Collins Trio, Darrin Herting, Ben Kelly, and Quinn Bachand joined Jesse on the stage. There were many mandolins and guitars, a fiddle and drums, and the magic happened. Qristina Bachand (sister of Quinn) made a cameo appearance to provide vocals for one song.

Later in the afternoon, I headed to The Ice Queen & the King Bees hosted by Sue Foley. Sue was joined on stage by Lil’ Jimmy Reed, Al Lerman, Bob Hall and the House Band. I was fairly confident that the magic would happen with this group of musicians, and in this I was not disappointed.

My last workshop was Sonic Boom putting Guitar You Experienced, Sean Ashby and Ostwelve on the stage. This was loud, fast, make-it-up-as-you-go magic! Again, it was a group that could be mistaken for a well practiced band.

I spent some time speaking to musicians and concert-goers looking for opinions as to why the magic doesn’t happen with every workshop. The consensus was that if an artist is comfortable enough and has the talent to jam then magic will happen. There was lots of magic happening at the Roots and Blues Festival this weekend.

Flohil recaps Day 3 of the Edmonton ...