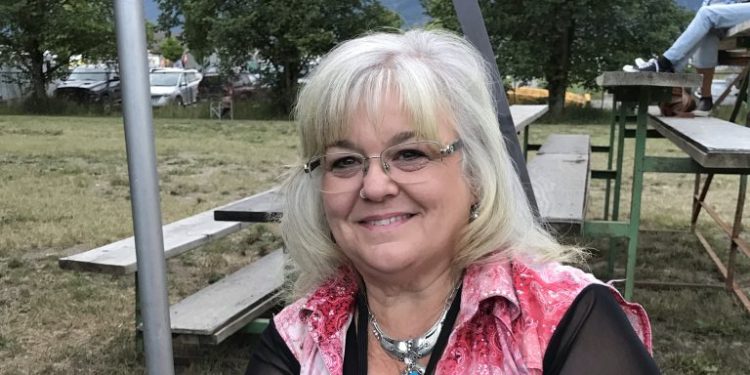 I stopped by the merch tent to hear Tracy Lynn and the Savage Hearts on the pop up stage.  Having arrived a few minutes early, I struck up a conversation with Tracy Lynn and made arrangements to meet after the gig for an interview.

Tracy is a lovely, warm, welcoming artist.  This is her second time pursuing life as a full-time musician.  Early in her life she fronted a band and enjoyed touring in the band van.  When the economy took a dive, and being a touring musician was no longer financially viable, Tracy took the opportunity to marry, raise children and give back through a career in child and family services.  Her career took her to Salmon Arm for a number of years, so being at the Roots and Blues Festival was like coming home for a visit.
A few years ago, Tracy found herself at a crossroads; her marriage had ended, her children were grown, her job was being restructured, and her mother was diagnosed with cancer.  This could have been a completely devastating time, but Tracy, with her faith in God, saw this as an opportunity.  She packed up and moved to Courtney, BC and made the dive back into music.
Tracy has been influenced by Kris Kristofferson and Johnny Cash – not just by their music but by the men themselves.  Bob Dylan is quoted as saying “Johnny Cash is the North Star, and you could guide your ship by him.”  Tracy Lynn recognizes that her faith is a vital part of who she is and is unapologetic about the way that faith influences her life and her music.  She strives to be another North Star for those needing hope, guidance and direction.
Tracy has teamed up with her good friend, Annie Savage.  Annie is in Iowa, so tours always start with one of the two getting on an airplane.  When Tracy isn’t touring with Annie, she is imparting musical knowledge and skill to her many music students, or touring western Canada presenting workshops on jamming and voice.  Tracy loves touring, meeting people and sharing hope with those she encounters.  Tracy has two CD’s on the market. The first was a solo album, Young Old Woman, and the second a collaboration with Annie, Two Coats.  As giving back is important to both artists, the royalties from Two Coats are donated to substance abuse rehab facilities.
Tracy is constantly looking for new opportunities to be involved in the music industry in Canada.  She welcomes all opportunities, from fireside gatherings to house concerts to festivals to a stage of her own.  She hopes that her songs will resonate with her audiences, and they will be influenced by the hope and love that she radiates from the stage.  Do not miss any opportunity to see this lovely lady sing her songs.
If you are enjoying this content, please take a second to support Roots Music Canada on Patreon!