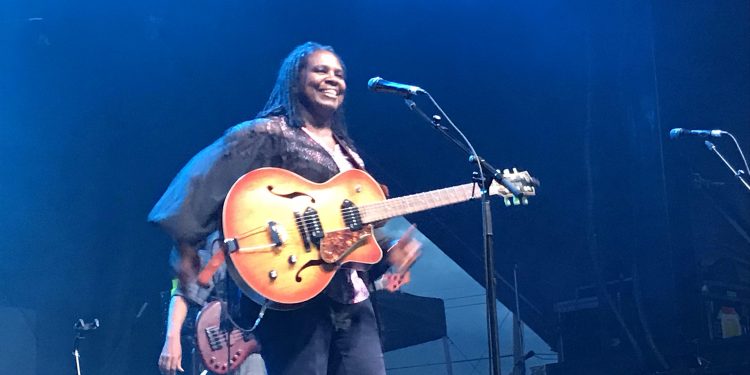 Friday was the official start of the Roots and Blues Festival. I was accompanied to the festival by a friend from Sicamous, which meant I spent more time front of stage than back of stage.
We began the experience by heading to the Shade Stage where Luke Wallace was singing some tunes. The theme of Luke’s songs revived memories of protests present and eras past. I enjoyed his semi rap style with the lyrics in many of his songs. He lost a few of his audience members when he launched into an anti-petroleum ballad. That may have been a coincidence or a reflection of the high number of Alberta tourists who visit the Shuswap annually.  Luke made use of some very catchy tunes to share his desires for a better world for future generations.
I left my friend to her own devices while I nipped backstage to connect with The Unfaithful Servants. I particularly wanted to say hi to Dylan Stone, whom I first met in Victoria in 2009. I have always enjoyed Dylan’s song writing. The Unfaithful Servants did not disappoint; Dylan has written some new songs, and Jesse Cobb showed he was just as talented with the songs he wrote and with  his mandolin playing. I always love a good fiddle, and Miriam Sonstenes is a good fiddler player. The bass player, Alex Rempel, was very proficient on the bass and had a lovely bass voice for the bottom of the harmonies. I will admit that I missed The Unfaithful Servant’s original bass player, Dennis Siemens, who holds a special place in my heart.
A big thank you and shout out to Cahoots Kitchen, as they were able to keep me nourished with a taco free of pork, shellfish, dairy, soy and wheat.
For the last gig of the night I caught Ruthie Foster on the mainstage. Ruthie is great. I love her powerful vocals. I caught a bit of Ruthie’s workshop on the  Barn Stage earlier in the day. I prefer the smaller stage but would not turn down any opportunity to listen to this lovely lady.  Her a cappella number and “Phenomenal Woman” were two of my favorite songs from her mainstage performance.  I wasn’t the only one who enjoyed “Phenomenal Woman.” That song garnered her a spontaneous standing ovation.
On the drive back to Sicamous my friend and I recapped the bands we heard and decided that The Unfaithful Servants were the group we enjoyed the most. If you haven’t had the pleasure of seeing The Unfaithful Servants in person, check them out on their YouTube channel.
I’m looking forward to another exciting day at the festival tomorrow.
If you are enjoying this content, please take a second to support Roots Music Canada on Patreon!