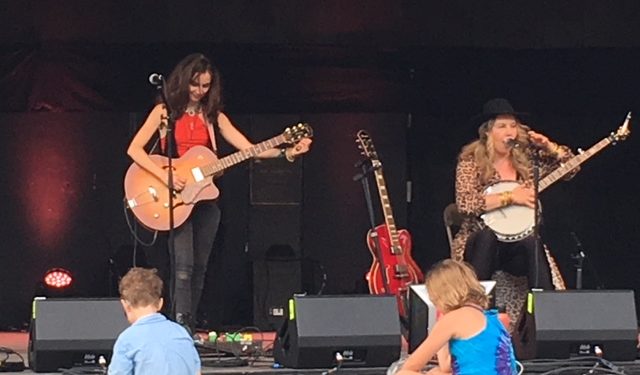 To start day three of Summerfolk, I set out to see David Newland at 1:00 p.m. at the Gazebo Stage for his Northwest Passage in Story and Song solo show, which in David style, was exceptional and thoughtful as always. His new album, Northbound, is stellar, and the set did not disappoint. David has been a mainstay at the fest this year, with performing and hosting duties. He’s an absolute delight as a host and doesn’t look too bad in a kilt either (last night’s outfit).

I then segued to the ..Said the Sea to the Shore workshop at the Down By The Bay stage with Garnet Rogers, The Once, and Amy Speace, where I was blown away by the vocal prowess of all onstage.

I grabbed a lovely cheese plate at the small-but-intimate Wine Bar stage, then caught a 3:30 p.m. set from the delightful human, gentle giant, and incredible one-man-band known as Sammy Duke – who simultaneously plays guitar, bass pedals, drum pedals, a mixer, and chimes (with his elbow!). He quickly won the audience over, getting them singing and clapping along right from the get-go. Every time I see him perform, he gets even better than before, and his great sense of gently self-deprecating humour is always so appealing. Even when a briefly noisy troupe of stilt-walkers disrupted the set for a second as they passed, Sammy generously complimented them on their great stilts, without missing a beat of his playing. And he’s got the songs, too: “Heal” was very strong, as was the Middle Eastern-flavoured social commentary song “Cast Away,” and the rousing singalong/clap-along finale of “Pressure.”

Around 4:30, I made my way to the Bay Stage again to see some of the Youth Discoveries showcase, Peer Pleasure, featuring solo singer-songwriters Molly Roach, JoJo Smith, and Miranda Journey; classic rock-style band Vintage Flight (from my hometown of Kitchener); and indie pop-punk group Sterling and the Birdwatchers. JoJo was a little pitchy, but her song was really good. Molly Roach was charming and sings a bit like Minnie Ripperton used to (Google it), and Miranda Journey was pretty strong and even better when she did a “tweener” later in the night at the mainstage with a very Coldplay-like song, including a millennial whoop. I predict she’ll be on the mainstage within seven years. The bands were good, loud, and hard-rockin’, which was rather refreshing for a folk fest. Gangstagrass’ rapper, Voice of Reason, was totally into it, making his way to the stage waving and vibing to Vintage Flight’s energetic and tight number.

I managed to get to the amphitheatre just before 5:00 p.m., in time to catch the Summerfolk choir – a pop-up gang of about 25 people who rehearsed a few times over the weekend – sing with David Newland on his song, the anthemic “Out Upon the Land,” which moves from a celebration of day-to-day existence north of 60 to the glory of the Northern Lights and the constant, eternal spirit all around us. Then the last song by the choir – accompanied by David and Lewis Melville on  -acoustic guitars, Tannis Slimmon on vocals, and Treasa Levasseur on keys – was a lovely version of “A Little Help from My Friends.”

Introduced by host Jon Farmer and his excellent handlebar moustache and cowboy hat, Jason and Pharis Romero were next up at 5:10 p.m., and they really showed their knack for quietly impressing an audience. Being the only mainstage act of the festival faced with rain this year, they gamely carried on as the capacity crowd covered themselves and their chairs with tarps and plastic sheets. It began raining when they started their set and of course ended as they finished their set. Much like their American counterparts Gillian Welch and David Rawlings, their guitar-banjo-married-couple-vocals music is simple and sweet, heartfelt and true, and steeped in bluegrass and country traditions. Pharis talked about how her family has lived for six generations in the very small and isolated area of Horsefly, B.C., about 700 kilometres north of Vancouver – which makes their rural music seem even more fitting and authentic. This is the first festival this summer that they’ve played without bringing their children, and they said that even though they love their kids, they were very much enjoying their “vacation.”

After last night’s incredibly moving, community-building workshop with Elage Diouf and Vildà, the super-engaging Alysha Brilla hit the mainstage at 6:00 p.m. with sidemen Gerima on the African djembe hand drum and Sammy Duke on the South American cajon hand drum, electric bass, drum pedal, and elbow chimes. There was a coterie of young children on the lip of the stage, who’d moved there during the rain and stayed after it stopped, which made for a fun approach to the set. Unafraid to lead the band and the audience in lengthy but tremendously enjoyable jams, Alysha turned “No More Violence” and “Bigger Than That” into singing, dancing, clapping, conscious parties for the body, mind, and soul. She generously shared the spotlight, with short but fantastic guest spots from Guy Davis on harmonica and The Voice of Reason from Gangstagrass on a rap, as well as some great soloing from Gerima and Sammy, plus a guest vocal and three guest dancing displays from kids pulled at random from the audience. It was so much fun, I kind of wished it had been the final set of the night.

T. Nile’s 6:40 set offered swampy, bluesy rock, along with her brand new co-electric guitarist (slide, that is) and backing singer Madison Galloway, introduced to her through longtime publicist Richard Flohil. T writes well about the human heart, and sounds good onstage, although Madison may need a little more experience with her before it gels, especially in balancing her backing vocals against T’s lead singing. I liked the opening and closing banjo tunes best, although “Shaky Throne” was a dark and very powerful song about how past abuse can be imprisoning, no matter how far you get from it.

The next “tweener,” by local singer-songwriter and hometown Owen Sound favourite Rob Elder, was mightily impressive. After the striking opening line, “You can fail at what you hate / So why not do what you love?,” Rob applied his beautiful voice to a hard, truthful tale about the financially precarious life of an artist, “When the Money Comes.” It was a very memorable performance. 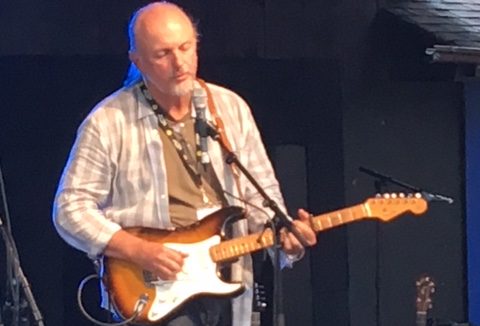 It’s been a long time since I’ve seen Garnet Rogers, so I don’t know when he decided that he wanted to pick up an electric guitar, plug it into a bunch of effects pedals and outboard gear, and wail through loud, droning sonic soundscapes like The Edge of U2 fame – but after the initial shock as he began his 7:30 set, it got good to me. His voice remains very rich and commanding (though he speak-sings a little too much for my taste), and he still writes very compelling songs. Garnet has always been a performer of somewhat dour demeanour – no in-between song banter here tonight – but it seems now that the cloud has lifted a little. In “Who Could Have Known,” he sang about “… the clean rain falling on me this blessed peaceful day, Like diamonds shone.” And he’s now at peace enough with the complex history of himself and his late brother Stan Rogers that he can write and perform a song like “Blood Brothers” and lead an inspiring finale of Stan’s “The Northwest Passage,” joined by The Once and festival director James Keelaghan.

After Grier Coppins bagpiped a somber, moving tribute to the late Bob Dixon, who used to perform the annual, traditional piping on the last night of Summerfolk each year, The Once took the stage for the final set of the festival, at 8:10 p.m. The trio sang a gorgeous a capella three-part harmony to open their show, which was awesome. But after that, it got a little, well, strange. The songs were still heartfelt and well-written, with fine lyrics and catchy melodies. But the choices of instrumentation and sounds – a Fender Rhodes piano here, a phase-shifted electric guitar there, some cooing harmonies elsewhere, and so on – made it sound more like Olivia Newton John or the Captain and Tennille or some other middle-of-the-road, adult contemporary AM radio material from, say, 1973. That’s OK, just not my taste anymore, and it seemed a little slick, and – I hate to say it – a little cheesy. I love the vocals and harmonies though!

James Keelaghan then led the annual, rousing, all-hands-on-deck finale of Stan Rogers’ “The Mary Ellen Carter” (Howard always cries a little when the second chorus comes around, and he did again tonight. Truth be told it always chokes me up a little too) and Leadbelly’s “Goodnight Irene” – all of which sent me home with a smile on my face. It was great to pay tribute this way to the volunteers (many of them have been working the fest for more than 40 years! That’s dedication at its best). Grier Coppins once again lead the crowd with his pipes out on the path to the finale and farewell at the Down By The Bay Stage. I forewent the after-party at the Bay Stage in order to write this story instead.

I’ll leave the final word to T. Nile, who said this during her set: “If you ever lose your faith in humanity, the antidote is to go to a folk festival.” That’s never been more true than at Summerfolk 2019, and I’ll hopefully be back to experience it again next year.