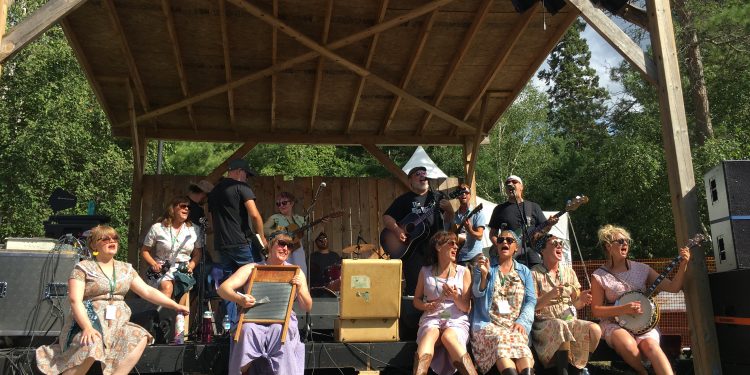 3:40 p.m. – I’m really regretting wearing long pants to the festival today. The forecast has been calling for rain and thunderstorms all afternoon and evening but so far, apart from a bit of rain this morning, all I’ve seen is sun … and yeah. It’s muggy and hot. I’d sure love to strip down and run into the water, but I don’t think this is that kind of beach. Suddenly I notice there is one important folk fest commodity missing from the artisans’s market: clothing. If you’re boiling hot and in need of a tie-dyed sundress – or freezing cold and in need of an alpaca wool sweater – I’m afraid you’re out of luck at Moose n’ Fiddle. Your bank account, however, will be better off for your having sucked it up and endured your discomfort.

4:04 p.m. – The festival is kicking off today with a performance they call the Kitchen Party. Really, it’s a giant jam featuring some of the non-marquee acts – you might say. Namely, Siouxperboat, the Fu Fu Chi Chi Choir, and the Black River Drifters, who will play their own set later tonight. It’s the closest this festival gets to a workshop. And what a jam it is. Black River Drifters are currently leading the audience in a rockin’ cover of “Midnight Special,” and it’s a ton o’ fun.

4:30 p.m. – “How are we for time?” asks one of the members of the Fu Fu Chi Chi Choir. “You’re doing great!” yells a voice from the audience followed by several more voices from the audience concurring. Nobody wants this to end. With that they break into a cover of “Northwest Passage.” Covers aren’t Fu Fu Chi Chi’s strong suit, I’ve noticed, but does anyone really care if you’re singing a classic like this?

4:58 p.m. – Whew! That was fantastic. Really every festival mainstage should open with a sing-a-long jam like that. Black River Drifters were the stars of this one, I think. Not only did they choose some great material — “Ring of Fire,” “Up on Cripple Creek” — they also rocked out on everyone else’s numbers, including Siouxperboat’s cover of the White Stripes’ “Hotel Yorba.” The final number was a cover of “Log Driver’s Waltz” at the request of the audience. It was a crazy good time.

5:19 p.m. – Leaf Rapids have just taken the stage, and the storm clouds are moving in. I’m strangely relieved to finally be cooling off and to no longer feel overdressed for the weather.

5:37 p.m. – Well ok, I was hoping we’d at least get to see Leaf Rapids before organizers shut the stage down to let the storm pass. But they sang exactly one song — or was it two? — before the tech crew ran up on stage and started covering everything in tarps. Honestly, the rain isn’t that heavy, and I wouldn’t have thought that the thunderstorm, mild as it is, was right overhead, but the Moose stage is small and open on three sides — not well sheltered from the rain — so I guess they have no choice.

6:42 p.m. – Someone around here has a sense of humour. They uncovered the sound equipment about 15 minutes after Leaf Rapids left the stage while someone played “Riders on the Storm” over the sound system.

“Welcome to the Moose n’ Fiddle Festival post rain concert,” Keri Latimer of Leaf Rapids declared as the band returned to the stage. Honestly, the post rain setting was perfect for the duo’s easy-going contemporary folk songs, and Keri’s ability to interact with an audience like they’re guests in her living room provided just the right amount of humour and lightness to get the show back on track. The duo played several tracks from their new album. Citizen Alien, covers of Patsy Cline and David Bowie — their well-known, theramin-enhanced version of “The Man Who Sold The World” — and closed the set by bringing their kids onstage to sing backing vocals on “Caragana Switch.” Hazel, it turns out, also plays a pretty mean harmonica. Bonus points to Leaf Rapids for giving a shout out to Roots Music Canada photographer Veronica Kovacs for her fishing prowess this weekend.

7:45 p.m. – The Black River Drifters wrapped up their set a few minutes ago, after another brief weather delay. This time someone played “Purple Rain” while the crew detarped the stage.  It’s almost like they’re used to this around here. As expected, the Drifters’ set was pure, good time, powerhouse country rock, and it had audience members up dancing for most of it — and I don’t just mean the one guy in the red shirt who’s been dancing to everything all evening. The Moose really dug these guys when they sent us their new record in May of last year, and it’s not hard to see why. These guys aren’t reinventing the wheel here, and their original stuff doesn’t quite touch the Johnny Cash and Leadbelly numbers they were playing as part of the Kitchen Party set, but these guys are a bunch of seasoned pros on stage as musicians and entertainers, they look like they’re having the time of their lives up there, and if I were in Winnipeg – their home base – looking for a solid evening of entertainment, I’d totally go to wherever they’re playing.

8:12 p.m. – Screw weather delays. It’s pissing rain now and nobody cares. The show is going on.

9:00 p.m. – Two-time Canadian Country Music Association Award nominees Nice Horse have just finished their set. To be totally honest, contemporary country doesn’t do a lot for me, and the band’s first few original numbers didn’t do much to change my mind, so I decided it was time to go get myself another one of those vegan pizzas and a cup of tea. As I was returning to my seat, front woman Katie Rox was talking about the long-time friendship among the band members, the success of this current ensemble, and the fact that they couldn’t do any of it without the support of people like us audience members who drive hours to festivals to check them out. They dedicated the next number to us, and it was a stripped down piece sung in four-part harmony with just acoustic guitar accompaniment. Turns out, these women can really sing and harmonize. It was really nice. Next up was a cover of Shaniah Twain’s “Any Man of Mine,” which of course is impossible not to like because the song is the musical equivalent of crack. Next, Brandi Sidoryk introduced a brand new song that featured a spoken word chorus and an absolutely blistering guitar solo by Tara McLeod. Side note: this girl can really play. Then it was on to another original, this one co-written in Nashville with accomplished songwriter Ed Hill. It was a lovely tribute to the country bar Katie and Brandi used to frequent as teens and young adults. Finally, the band closed the set with its single, “Pony Up,” a relentlessly catchy little number if ever their was one. I’m still not a contemporary country fan, but I get what people see in this band.

10:10 p.m. – The shuttle back to the Sioux Narrows camp ground leaves the festival at 10:15 p.m., whether the show’s over or not, so sadly, we are forced to miss the last few minutes of the main event: Midnight Shine’s set. Thus, I cannot tell you whether or not they closed the show with their bilingual rendition of “Heart of Gold.” I can tell you that they overcame a lot of set-backs to put on a great show. For one thing, the monitor issues that appeared to have plagued the festival all day were particularly aggravating as Adrian Sutherland and company took to the stage. Adrian could be seen several times signalling to the sound crew for help with the mix. Secondly, after teasing spectators a couple of times with brief showers, the sky opened up just as the band took the stage and unleashed a torrent of rain, sending many spectators fleeing for cover and causing more than a few to call it a night. (At this point, a team of organizers went to work fixing a tarp to the side of the stage so the show could go on.) Thirdly, Adrian revealed about three songs into the set that he was recovering from a chest infection and humbly told the audience he hoped he could deliver a good vocal performance. He needn’t have worried. I likely would never have noticed if he hadn’t said anything. If he was a bit more horse than usual, it just sounded like rock n’ roll to me. Those who persevered through the rain were treated to powerful renditions of well-known numbers like “I Need Angels” and “Sister Love” from the band’s latest album, High Road, as well as deeper cuts like “Velocity,” “Northern Man,” and the forthcoming single, “Lonely Boy.” Adrian smartly left some of the talking on stage to his band mates, presumably to rest his voice, and his colleagues proved to be able entertainers. I wish I could’ve stayed until the end, but I’m looking forward to my next opportunity to see the band, hopefully in a dryer setting with flawless sound.

10:30 p.m. – Riding back to the campground, Veronica and I realize that, for all its charms, the Moose n’ Fiddle Festival is not precisely as advertised. We saw a LOT of wildlife on this trip –  a hare, several deer, a wolf, and two bears, including one young one that Veronica chased out of our campsite – but we didn’t see a single moose. Perhaps most striking, though, we didn’t see a single fiddle. Not one. We managed to watch an entire weekend of roots music without seeing a fiddler. I’m not really sure what the significance of that is. It’s just interesting. It certainly didn’t dampen our enthusiasm for the event. We’ll be back next year, and next year, we’re going to jump on the Ontario Parks reservation site on opening day to grab ourselves a spot at Caliper Lake. No more shuttles for us.