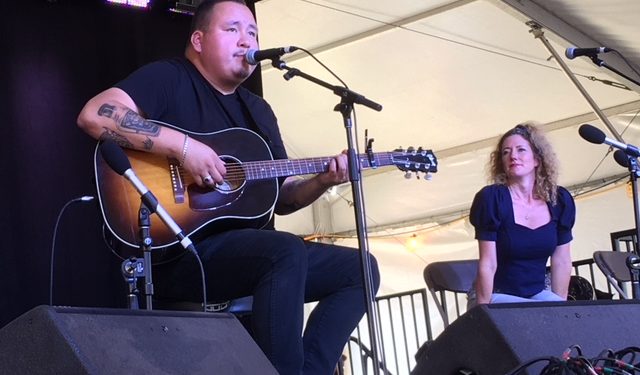 I started the second day of Summerfolk 2019 at the Down By The Bay beer tent stage with a 1:00 p.m. Barn Dance workshop featuring the bluegrass/hip-hop hybrid band Gangstagrass and Québecois traditional folk/jazz band Rosier (formerly Les Poules à Colin). The former are very encouraging even before playing a note, as a bi-racial, bi-musical group in the midst of a very divided America. Essentially, Gangstagrass sing and play slow, mournful bluegrass on banjo, guitar, and fiddle, while rapper The Voice of Reason freestyles over the breaks. It’s a great way to expose a predominantly older, predominantly white folk-fest audience to smart, improvised black poetry of the moment. Rosier kept up with them every step of the way, and led the musical conversation with their own inspired and eclectic sound too. Samantha Martin and Sheree, from her band,Delta Sugar, joined GG on stage to sing and sway for a bit.

At the same stage, the 2:00 p.m. workshop slot, A Wanderer I’ll Stay, featured a hugely talented lineup of host Kathleen Edwards, William Prince, and Pharis and Jason Romero. It was William’s first time at Summerfolk, and he managed to even make his sound check fun, by turning it into a little “pre-song” song, sung against the chords of his first tune. He has such a deep, resonant voice, such great songs, such a lovely, understated sense of humour, such a low-key manner, and a genuine love of creating community through music, that he knocks your socks off without even seeming to try. 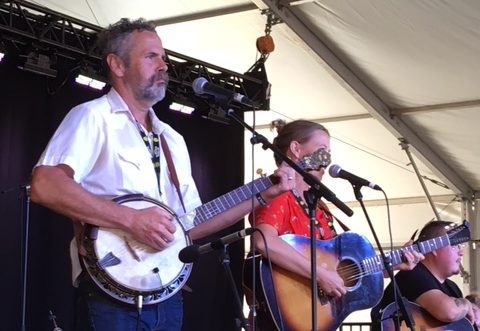 Kathleen played “Moving to America” and “In State,” and reprised one of her new songs, “Glenfern Avenue,” from her mainstage set last night. The Romeros’ vocal blend is tight and precise without sounding contrived; on the contrary, they make it seem almost effortless. They were born to sing together, like Gillian Welch and David Rawlings or The Civil Wars. They were so moved by the performances of the others that Pharis said, “This is what folk festivals are all about.”

After William said that he never knew about Kathleen, and this is his second folk-fest workshop with her this summer, she joked that “We’re practically common law.” After big laughs, he said, “It’s probably not gonna work out,” which doubled the laughter. “I live in hope,” answered Kathleen, completing the improv routine to cheers. A very satisfying workshop, this one.

Lunch was a wood-fired Hawaiian pizza. Howard removed the pineapple on his half; I’ll never get why, but no matter … More pineapple for me!

The next workshop slot at the Bay stage, at 3:30, was Songs From a Hat, wherein both participants and audience members get to drop their suggested covers into a hat, and the collected musicians are either stumped or get to try and play at least one verse and chorus of the song together. The gathering of players featured host Treasa Levasseur, Brontae Hunter, The Great Canadian Swampstompers, Sammy Duke, David Newland, and Samantha Martin. The hard-to-stump Sammy Duke led the group through a bit of Joni Mitchell’s “Big Yellow Taxi,” while the Swampers led a version of Bruce Cockburn’s “Wondering Where the Lions Are” that was much more straight-beat than the reggae original. The Neil Young song “Harvest Moon” was a bit of a train wreck, as the audience member who suggested it was invited to sing it but ended up trying to sing the lyrics and melody of Young’s “Comes A Time” against the chords of the first song. “Old Town Road” fared better, as the audience member who volunteered to sing it did a serviceable, karaoke-like job. Samantha Martin crushed the rock ‘n’ roll vocals of “Lucille” (the Litttle Richard song), after which David Newland led the crowd in singing the country and western chorus of the other “Lucille” (the Kenny Rogers song).

I drifted off to the Wine Bar stage around 4:00 p.m. to check out the Expect the Unexpected workshop with reggae/world/funk/pop singer-songwriter Alysha Brilla and Blisk, four women who play and harmonize expertly on traditional Eastern European music. With her Tanzanian father playing bass, Brilla sang a great version of her fantastic and very timely song “Immigrant,” while Blisk showcased its members’ stunning vocal skills and even livened up its show with a little stomp-heel dancing. 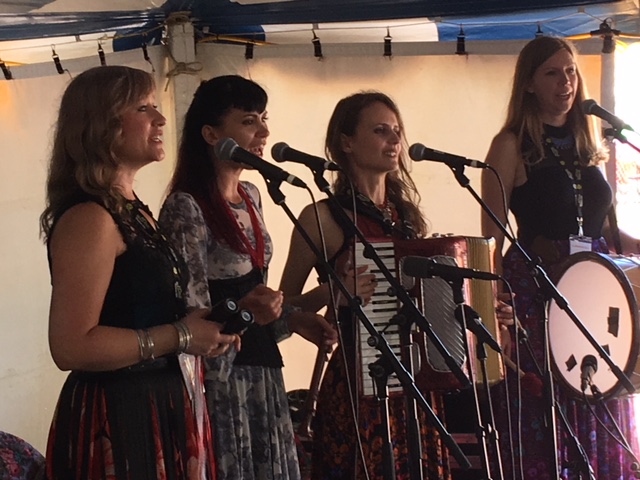 Dinner was some very salty sausage, very cheesy potato perogies laid over a bed of sauerkraut, and not-too-sweet cucumber salad from The Bavarian Hut. Bavarian it was not, with tzatziki instead of sour cream and Greek salad on the menu. But hey, it hit the spot. (By the way, the place I mentioned yesterday was called Veggie Vittles). Then onward to night two at the mainstage!

After an intro by host for the night David Newland, Dione Taylor opened it up at 5:45, with some blues, soul, R&B, and gospel. Standouts included excellent versions of the Bill Withers chestnut “Grandma’s Hands” and her own “Resist” – which isn’t so much about fighting political dictators, but about defeating the devil. Hmm, maybe that’s the same thing! Her electric guitarist. Sean Pinchin (who has his own career as a slide guitar blues solo artist), was in superb form, and her rousing finale, “Spirit,” got the whole crowd up to sing along.

Jon Brooks followed at 6:35, starting his first song, “Hudson Girl,” with a loooooong, drawn-out chant of the word “red,” and he singled me out as the only redhead he could spot in the crowd. That was some unexpected fun! Bassist Vivienne Wilder and electric guitarist Sean Cotton (perhaps best known as one half of The Undesirables) added a lot of edge to Jon’s funky, percussive acoustic guitar and often dark and heavy material. His newer songs – one song about a Bosnian cage fighter, another about the Camino de Santiago – were mightily impressive.

At 7:20, on came Vildà, the Finnish duo of accordionist Vivi and Indigenous (Sami) drummer and dancer Hilda, hence their combined name – although they later discovered that the word “vilda” also means “wild” in the Sami language (which was very appropriate). Vivi played a fast, sharp button accordion, and Hilda played the biggest hand drum I’ve ever seen, and sang in the traditional yoik song style. They live in the isolated North, where it’s a 160-kilometre drive to the nearest small city to dance at a disco (and the same distance to return), so … they invented their own disco music! Which rocked. For their finale, “Wild Print,” Hilda did a kind of interpretive dance, and the song offered the best context for her haunting, piercing voice – and Vivi’s precise bellow shakes. 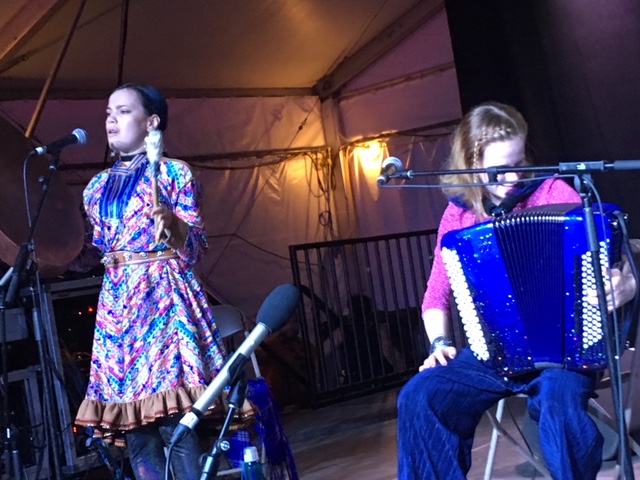 After a tweener where Sammy Duke got the crowd to sing along to the chorus of his song “I Feel the Pressure,” William Prince came on for his 8:05 mainstage performance. He wasn’t quite satisfied with the sound he was getting in the first song – always a challenge when the acoustic guitar and voice have to be turned way up because he plays so quietly. When he caught a wave of feedback, he just unplugged, stood up from his chair, moved to the front of the stage, and was about to play without any amplification at all. Luckily, a Summerfolk sound tech in the audience quickly mic-ed up his guitar and voice, and we ended up with a wonderful set. And William was a model of grace under pressure. He talked about what a dream come true it was to play for a full crowd of people at a folk festival with the sun just setting. He talked about how it was good to play through a little adversity, because “calm waters make poor sailors.” His solo set was so pure, so simple, and all about the song. He’s the only mainstage performer who played a full set with just his voice and a guitar. He’s as solid as an oak tree.

I left the amphitheatre to catch the Where North Meets South workshop at the Bay Stage around 9:00 p.m., and boy, am I glad I did. Hosted by Alysha Brilla and her band, and featuring Éliage Diouf and his band, and Vildà, it was one of the best workshops I’ve ever seen in more than 20 years of attending folk festivals. All three acts so generously shared the stage and the music with each other, and with the packed audience. Everybody onstage improvised brilliantly, and their lengthy jamming out on each other’s songs crossed barriers of language, style, and approach, to create a most beautiful community of loving sound and music. The dance floor was packed to overflowing; the crowd was non-stop dancing, clapping, and singing along; and it was a true, sweet, shared communion of music. People will be talking about this one for a long time to come. It was the highlight of the weekend so far.

Gangstagrass played their top-of-the-bill set back at the mainstage at 10:20, but after the peak of the last workshop I saw, and having seen them earlier at my first workshop of the day, it was hard to muster as much appreciation for their music. It was still as strong as it was earlier in the day, and they did get everyone up and raising their hands and singing along. Samantha Martin and Sheree joined them again with Martin crushing a solo near the end.

Looking forward to more tomorrow. I haven’t mentioned the arts and crafts yet but will check it all out tomorrow.