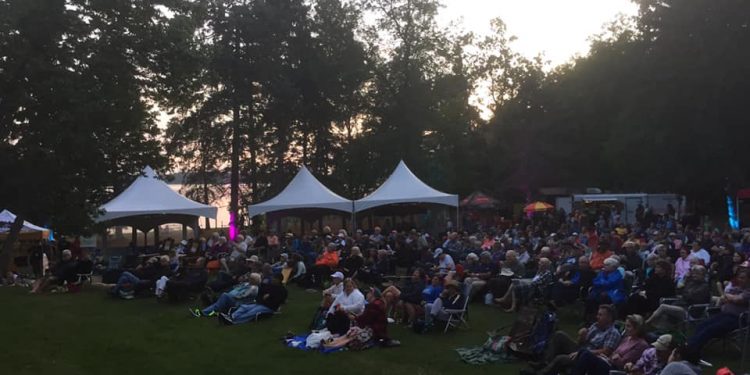 5:11 p.m. – Veronica Kovacs and I are on the shuttle bus from Sioux Narrows Provincial Park, where we’re camping, to Caliper Lake Provincial Park, where the festival takes place. The fact that this shuttle exists is already way cool. But we’ve just stopped to pick up more festival-goers at the Northern Ontario Sport Fishing Centre, and as everyone is sitting down, our shuttle driver pulls a bottle of champagne out of a cooler. “We’re fully licensed,” she exclaims as she starts pouring us all glasses (Don’t worry. She didn’t partake). We’re not even at the festival yet, and already this is the Best. Festival. Ever.

6:23 p.m. – We’ve settled in on the festival site, and a local band called Siouxperboat is opening the evening. It’s a quartet of guitar, banjo drums and percussion, and while they may not headline Mariposa any time soon, they’re a perfectly good little roots outfit to get the crowd warmed up – and their closing number, “Tiny Houses” is a really nice, catchy little song with an easygoing tempo and some nice harmonies. In fact, the audience is so enthused, they clap loudly and call for an encore at the end of the set (no encore was forthcoming, presumably because the festival has a schedule to stick to). 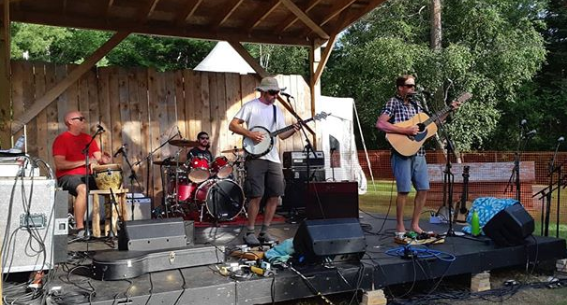 Veronica and I have just finished surveying the festival site, and there is much to like about it. First, it’s on the lake shore, so one could conceivably swim and listen to music at the same time were one so inclined – although there is a fence that blocks easy access to the water, and the sight lines from the lake wouldn’t be great (unlike at Trout Forest where you can easily watch the mainstage from a floating mattress). The Lake of the Woods Brewing Company is selling beer onsite (Veronica is happy), I’ve ordered myself a vegan potato pizza from the wood-fired pizza truck – which is clearly experienced at accommodating vegans – and we’ve had a preliminary look at the artisans village, which is quite something for such a small town. There are people here selling jewellery, pottery, preserves of every kind — you name it really. A couple of other things I note: pets are allowed at this festival. We opted to leave Veronica’s dog at home, but it was nice to know she would’ve been welcome here. Also, no porta-potties! The park’s washroom complex is right here for all to access.

7:30 p.m. – “This next song sounds like it’s about a terrible boyfriend, but it’s actually about a goose,” Carly Dow just told the audience to laughter. Now she’s picking out the number on clawhammer banjo and singing it in her powerful, country-tinged voice, which is perfect for this kind of slightly Appalachian inspired material. Carly is an environmental scientist by training who lives close to the land on a piece of property somewhere in rural Manitoba, and she joked that she writes more songs about animals than people — although I’m starting to wonder if it’s really a joke. The number she’s singing now is about the elk who appears in a recurring dream to scoop her up in its antlers and carry her off into the sunset. Hey, every artist needs something that makes her unique. Why not songs about animals? Any which way, Carly is putting on a perfectly enjoyable show for the 500 or so folks assembled here on the grass. She’s not blowing me away, but she’s friendly and connecting with the audience, and she has a sound that’s totally working in this setting. 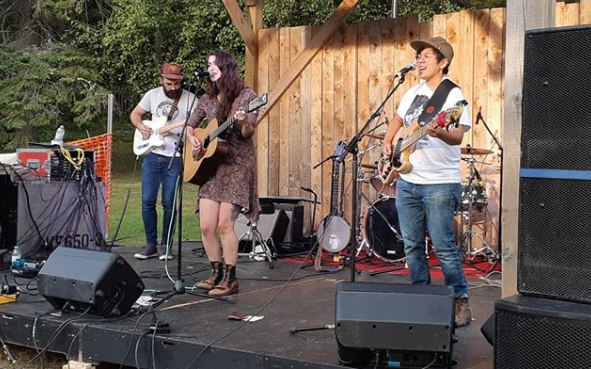 7:59 p.m. – Thumbs up to host Patrick Kane for not trying to be funny or entertaining in his own right but just keeping things moving along.

8:14 p.m. – Coco Love Alcorn – who Patrick Kane just introduced as “Coco Love Acorn” – has launched her set with an a cappella spiritual number, and the audience is clapping along without any prompting. Wow. Here’s an artist who knows how to grab and hold a crowd.

8:26 p.m. – It takes a fuck ton of huevos to play a headlining spot at a folk festival with nothing but a ukulele for accompaniment but Coco is absolutely killing it up there. I knew she was a great singer, but I had never totally appreciated until this moment just what an incredible instrument that voice of hers is. The last song she sang was a full-throated scorcher that showcased her power, range and capacity for vocal pyrotechnics. Now she’s dialed it right back for a sweet, catchy, down tempo little number. Oh! And now she’s got the audience singing along on “Old Habits Die Hard,” and she’s doing a little scat between verses. Young folkies looking for a role model, this is how you put on a show.

9:14 p.m. – Coco is just finishing her set with “Tiny Lights,” which she’s taught the audience to sing along on. The crowd is right into this. The people in front of us are holding up lighters as we sing. Coco has brought the microphone off the stage so she can see the audience better without being blinded by the stage lights, so now she’s kind of in silhouette. It’s a killer finale to a killer set driven almost entirely by the power and versatility of Coco’s voice. 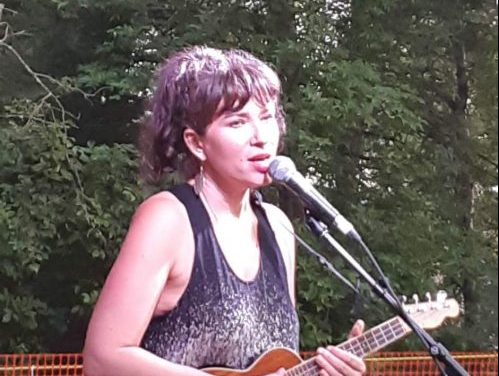 9:34 p.m. – Someone in front of me is smoking. Ugh. Can you prohibit this at an outdoor music festival? At least in front of the stages?

9:37 p.m. – I’d never heard of the Fu Fu Chi Chi Choir, but they’re a ton o’ fun: eight women – I’m told there are usually 10 but two are off performing in a play right now – dressed as depression-era rural housewives, playing accordion, banjo, guitars, ukulele, bass and washboard, and singing countryish numbers – with shall we say, contemporary themes – in eight-part harmony. And yet, while it would be tempting to characterize the choir as a novelty act, that wouldn’t do justice to what they do. At least some of the women in this choir are theatre performers, and to me, the act is cut from the same cloth as John Millard’s Polka Dogs or Happy Day: theatrical takes on a genre that could initially be taken as lampooning but that end up coming across as delightfully refreshing new takes on it. The choir was allegedly born here at Moose n’ Fiddle and has played here the last four years. As festival traditions go, this is one of the better ones I’ve come across.

10:15 p.m. – Fu Fu Chi Chi is just finishing up its set as the appointed time to meet our shuttle arrives.  I’ve heard a number of people comment tonight about how well-organized this festival is.  So far, I have to agree.  The organizers really seem to have thought of everything and then some.  It will be interesting to see how they handle tomorrow, when the forecast is calling for thunder storms.  So far, I’m impressed. 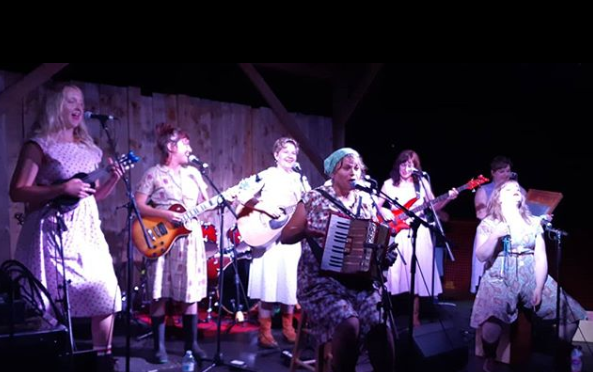 Beverly Kreller runs down just some of ...