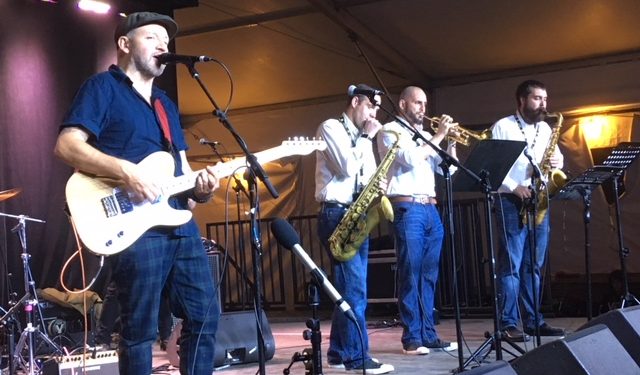 On the first night of Summerfolk, only two stages were open: the mainstage amphitheatre and the Down By The Bay beer tent stage. Thanks to this unique set of circumstances, it was one of the few times I didn’t want to be five places at once during a folk fest!

We rushed off to get some food; I had the best Thai coconut rice, and my partner, Howard, had a scrumptious pasta salad filled with fresh veggies. I have to go back tomorrow so I can tell you what the name of the vendor is.

I caught a few songs by Minor Empire at the Bay stage during their 9:00 p.m. set. Blending Turkish traditional roots with trippy electronic textures and funky rhythms, they created a hypnotic vibe that entranced their audience and drew them in. Big ups to vocalist Ozgu Ozman for her captivating vocals and Didem Basar on the kanun (a Turkish zither played with mallets) for his incredibly fast, precise, and dexterous playing.

I got to the amphitheatre just in time to catch some of Maria Dunn’s set, and I particularly loved her beautiful, heart-rending piece about Malala Yousefzai, the Pakistani activist for girls’ education and the youngest Nobel laureate ever. Maria was very ably backed by sibling trio The McDades – Solon McDade on bass, Jeremiah McDade on the horn, and Shannon Johnson on violin. It made me sorry I didn’t catch the whole set.

Next up was the first of the two biggest surprises of the night: a “tweener” (a short acoustic number or two by an unscheduled performer who fills time between acts while the next act gets set up for sound) by Nashville singer-songwriter Amy Speace. She was perfect – charming, funny, self-deprecating in the best way, with a great song, “The Fortunate Ones.” At one point, instead of a solo, she said, “There should be a really good harmonica solo here, but I play the harmonica really terribly, so … You’re the fortunate ones.” I’m going to make sure I see her full set sometime this weekend.

Then it was the grand return of Kathleen Edwards at 10:00 p.m. Despite the weight of expectations after five years away from touring, she didn’t disappoint. On the contrary, it was a triumphant comeback starting with excellent renditions of her CBC Music “hits” – “Change the Sheets,” “Six O’Clock News,” “Mint,” and “Asking for Flowers.” 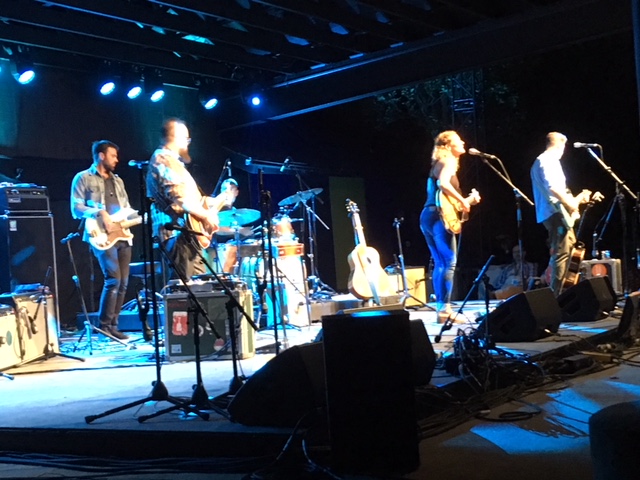 Kathleen then talked about how “when you professionally emote for a living, you can really burn out,” which she did, hard. She talked about her immense gratitude now that she’s found a sense of community built around her coffee shop in Ottawa, where instead of connecting with people in her audiences one at a time, she gets to connect with people she sees there every day.

She said she’s got some new songs and introduced one about her ex-husband (Colin Cripps) called “Glenfern Avenue,” which is where they used to live together in Hamilton. At 28, just when Kathleen thought she’d checked off a bunch if life-goal boxes (married, bought a house, etc.), “it all went to shit,” she said. Despite the rough times, she’s come now to truly value all that transpired there. As she sang repeatedly in the chorus, “I will always be thankful for you.” It’s a great song that at one point lists all the cool things that happened – touring, playing on TV, meeting some of her heroes – then follows that up with the line, “It almost killed me.” Thank heaven it didn’t.

Next up was the second of the two biggest surprises of the night: of all things, a cover of Supertramp’s “The Logical Song.” Whaaaaaat?! I know. But I swear, it was pure magic. Stripped down without the slick production, whiny vocals, and bleating saxophone of the original, and performed in a mostly quiet-but-tense way, Kathleen got to the tender, broken-hearted hurt behind the song that I never even knew was there. It was absolutely transcendent.

Kathleen broke it down after that to just her on acoustic guitar, and pedal steel player Aaron Goldstein (best known for his work with City and Colour), performing a sweet version of “I Make the Dough, You Get the Glory,” and another excellent new song, “Love is Like Simple Math” – which she could only complete when she re-connected with one of her best and earliest childhood friends. There was another, darker new one, with the key chorus line, “Just like you said/I will turn up dead/In a car.” The last song, by audience request (thanks, Howard!) was “Back to Me,” which was just as barn-burning live tonight as it ever was. I had to run to the next show, but I caught the tag-line of the encore as I went: “For 39 years I’ve kept my options open.” 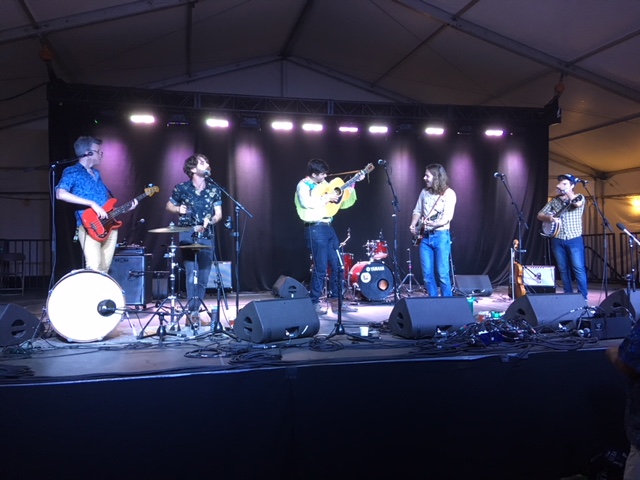 That ended the mainstage, but there were a few late-night sets still to go at the Bay stage. And I’m a night owl anyway, so Union Duke it was, for the 11:00 p.m. slot. A quintet of bass, percussion, acoustic guitar, electric guitar, and banjo, and five excellent voices in perfect harmony, Union Duke put out high energy, like to drink beer and have fun, and get their audience dancing relentlessly. They were born to entertain, and they all stand at the lip of the stage like they own it. It helps that they write and sing catchy choruses that you can easily sing along to by the end of the song. “Make It Right” and “Coffee Whiskey” were standouts. Imagine the first time you heard Mumford and Sons, but fresher, with a wicked sense of humour, and with ten times the fire. At one point the percussionist and band mouthpiece called the band “the Toronto-based indie-folk-bluegrass darlings.” Yup, I get it.

Closing out the night with a midnight set were Vancouver’s The Paperboys, who are what Union Duke might be 20 years from now: seasoned professionals who still love to entertain and keep the people up and dancing. Frontman/guitarist/singer/songwriter Tom Landa is as smooth as they come onstage after 25 years of live playing, but he remains passionate and authentic in all he does. (He’s such a class act that the first and last thing he did was thank all of the hard-working sound crew, all of whom did a great job all night, thank you very much.) Drafting in an Ontario-based horn section of two saxophonists and a trumpeter from The Commotions for the occasion, the band moved from African highlife to Cajun stomp to Cape Breton fiddle tunes to “I Will Be Your Easy Chair,” which sounds as if it could be a lost Van Morrison song from his prime in the early ‘70s. If it has a beat, The Paperboys will nail it, so the dance floor stayed full, the people danced, clapped, and sang, and a splendid time was had by all. What a great, full night of music! 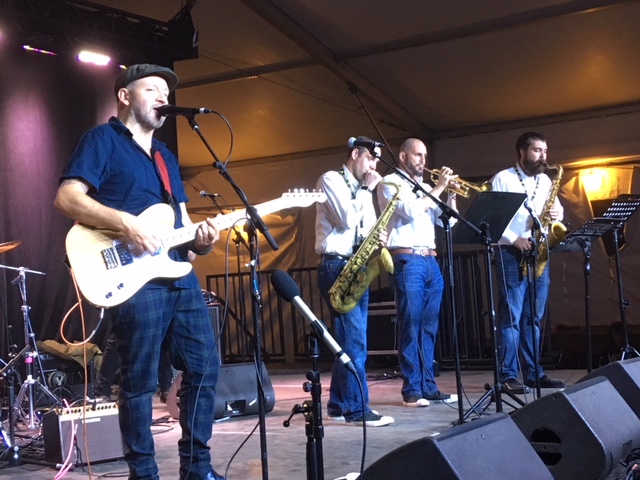 The Paperboys. Photo by Bev Kreller.