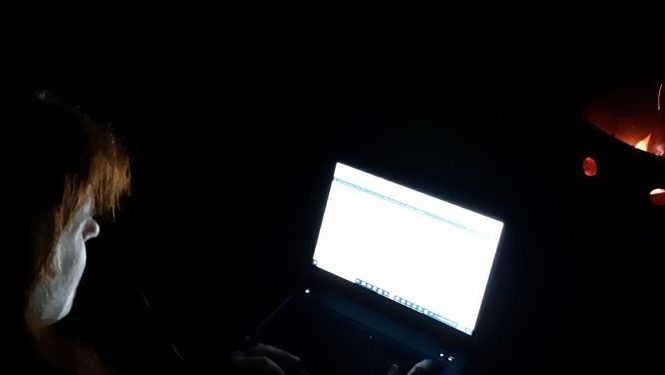 That’s me in the photo above, editing Roots Music Canada by the light of my campfire as Veronica Kovacs and I await the start of the Moose & Fiddle Festival.

If you know anything about music festivals in northwestern Ontario, chances are the ones you’re most familiar with are Live from the Rock (founded in 2002), which takes place about an hour out of Thunder Bay in a tiny town called Red Rock, and the Trout Forest Music Festival (founded in 1996), which, in the minds of many who have never actually been there, is “a cool little festival out in the woods somewhere that books cool, emerging stuff.” (Note: Despite having the word “forest” in its name, it actually takes place in a grassy municipal park on the banks of the English River right off the highway in Ear Falls, ON).

But in 2014, there was a new entry into the northwestern Ontario festival circuit, and I’ve had my eye on it for a couple of years now.

The Moose and Fiddle Festival takes place in the middle of August in Caliper Lake Provincial Park in Nester Falls, ON. If you’re trying to work out where that is, if you could draw a line on the map between Kenora and Fort Frances, it would be kind of in the middle. It’s a smaller festival than Trout and Red Rock – just two evenings of entertainment on a Friday and Saturday and no daytime workshop stages – but whoever’s booking this thing is making some really clever choices, which brings me to the first of two reasons why I can’t wait to check it out for the first time this year.

If you’re a relatively low-budget festival in a small town that’s trying to attract tourists, going after a couple of A-list indie-folk-roots acts and then rounding things out with up-and-comers who are in the region on tour is a good way to get attention. Last year it was Old Man Luedecke and Elliott Brood topping the bill. The year before that, they had William Prince – and hey, look at him now! This year, the Saturday night headliner is Midnight Shine, the roots-rock band fronted by Attawapiskat’s former CEO for economic development, Adrian Sutherland and introduced to new audiences this year thanks to a viral video of the band covering Neil Young’s “Heart of Gold” partly in Mushkegowuk Cree. I’ve never actually seen Midnight Shine live before, and I can’t wait. Nice score, Moose and Fiddle!

Also on the bill this year is Leaf Rapids, the husband-and-wife duo of Keri and Devin Latimer of the Juno-winning band Nathan, who released a charming new album this year called Citizen Alien, exploring Keri’s Japanese Canadian ancestry. As anyone knows who has seen these two perform in any of their incarnations over the years, they make this whole delivering a killer performance thing look like child’s play – lovely harmonies, top-notch songwriting, and live shows that make you feel like you’re in their living room. Plus Keri plays the theramin. How cool is that?

The other established act on the bill this year is Coco Love Alcorn, the delightfuly jazz folk – or should that be folky-jazz artist who’s lived in Toronto, Vancouver, and I think even on the east coast at one point. She’s perhaps lesser-known in these parts, but she’s sure to delight the assembled masses, particularly if it’s as sunny and warm an evening as the forecast is calling for. Her music is a great soundtrack for sunny days in parks.

The Sioux Narrows Nestor Falls area is a sport fishing destination, yes, but it’s also put a lot of effort into being a creative centre. In addition to Moose and Fiddle, it hosts the annual Sioux Narrows Arts Festival, and it even hosts artists residencies in some really cool spots – such as a floating studio and a studio perched atop a rock face. Veronica Kovacs and I decided to come to the area a couple of days early in order to make a true holiday out of our experience and get the best of both worlds. So I’m writing this while sitting in front of a camp fire at Sioux Narrows Provincial Park – having spent most of the last two days on Veronica’s boat while she did some fishing in Lake of the Woods. It’s been a spectacular two days relaxing on the water, navigating around dozens of tiny islands and sitting by a campfire at night. Now I’m looking forward to two more days of listening to music surrounded by this same natural beauty.

I’m told Caliper Lake Provincial Park books up for the summer pretty well the moment reservations open – so many people travelling for Moose and Fiddle end up staying in Sioux Narrows Provincial Park instead, which is about half an hour up the highway. But here’s something amazing: when we arrived here at Sioux Narrows we were told that Moose and Fiddle runs a shuttle bus from our campground to the festival site, so we can enjoy a beverage at the festival without having to worry about how to get home – or at least back to the tent. Now that’s hospitality!

Kathleen Edwards is back … and playing ...

Beverly Kreller runs down just some of ...