Kathleen Edwards is back … and playing Summerfolk 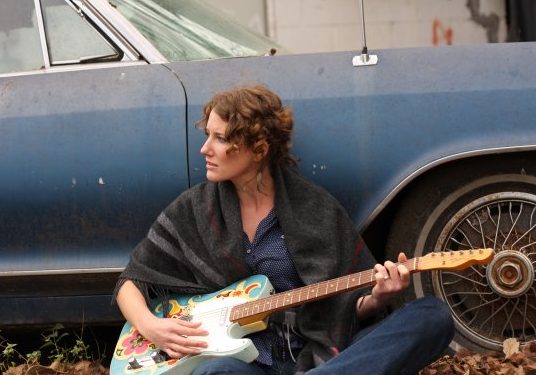 Of all the performances to come at Summerfolk 2019, the one I’m most looking forward to is the mainstage appearance of Kathleen Edwards, as she returns to making music after five years away from performing and seven years away from recording.

Kathleen has always been a terrific songwriter. Songs like “Six O’Clock News,” “Hockey Skates,” “Back to Me,” “Oil Man’s War,” “Asking for Flowers,” “Change the Sheets,” and  “I Get the Dough, You Get the Glory” had charmed critics and audiences alike, and percolated steadily into the nation’s consciousness via CBC Music. In 2012, she won the SOCAN Songwriting Prize for “A Soft Place to Land” (co-written with John Roderick). In both 2008 and 2012, she was short-listed for the prestigious Polaris Music Prize for the albums Asking for Flowers and Voyageur respectively. She had released four acclaimed albums over the course of her career, each garnering Juno Award nominations in the Album of the Year category. She’d also earned three Songwriter of the Year Juno nominations.

Then, in 2014, she stepped away from the music business entirely – no recording, no performing, and as far as we know, no songwriting. She opened a coffee shop in the Ottawa suburb of Stittsville, and with her typically smart, irreverent, and deadpan sense of humour, called it Quitters. As the bio on her current website says, she “strolled away to hide in plain sight.” The Ottawa Citizen recently called Quitters “a quintessential slice of backyard Canadiana,” but we all missed Kathleen’s pen and her voice. She played a few isolated dates in 2017 and 2018, including three shows opening for the legendary John Prine and a short stint opening for Matt Mays, but little else. Someone stole her 1957 Les Paul electric guitar, but she put out the word and got it back.

At first, it seemed as if she’d just become fed up with the music industry and decided to leave; it certainly wasn’t the first time that a musician got burnt out by the business and quit for a while. But as the years passed, it slowly emerged that there were deeper reasons for her departure: Kathleen had been diagnosed with a mood disorder and clinical depression in 2012.

Then, in March of this year, she turned up to play a Joni Mitchell song at the 16th annual Inspiration Awards Gala for the Royal Ottawa Foundation for Mental Health. Said Kathleen at the event, “There’s no greater relief that I can think of in my entire life than having a doctor say, ‘I believe you have clinical depression, and I’d like to prescribe to you a medication that might help you.’ Within several weeks, I was feeling like there was a piece of me that came back into the universe. I know first-hand the feelings of helplessness and hopelessness, and they are very powerful things that disengage any rational and any true feeling you know about yourself.”

So it was tremendously heartening to hear the news, here and there, that Kathleen is well on her way back to making music full-time again. It emerged that she co-wrote the song “Good Woman” on the current release by country singer Maren Morris. This summer, she’s getting her feet wet for regular live performance again, playing at several other folk festivals in addition to Summerfolk – including those in Peterborough, Regina, and Winnipeg. She’s signed a new record deal and has headed to Nashville to start recording a new album. As she said recently on Twitter, “’I’m so excited for you!’, ‘How amazing,’ is what I’m hearing from friends and family. And they’re very kind and supportive. But I’m peaking out on the anxiety meter. Big time. And that’s how mental health rears its ugly head.” And she later tweeted, “Signing a record deal via DocuSign is infinitely less cool than on the hood of a car. But still. Signed a… record deal today.”

Now that she’s back, I can’t wait to see her play those great old songs again on the Summerfolk mainstage (Amphitheatre, Friday Aug. 16, at 10:00 to 11:00 p.m.), and, especially to see what some of the new ones might sound like. And I hope that she continues to take good care of herself and that we can all enjoy more great new Kathleen Edwards songs in the many years to come.