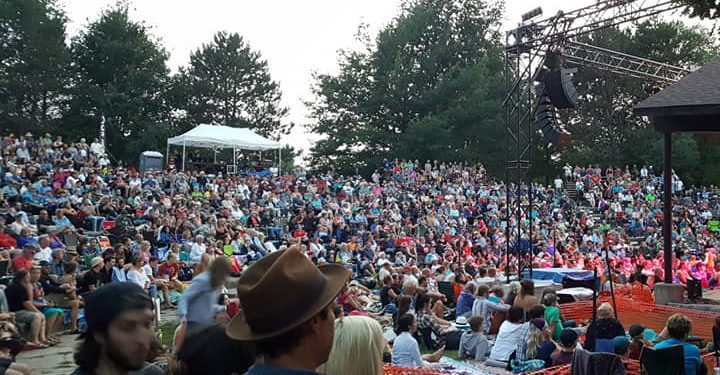 It’s with keen anticipation that I’m looking forward to Summerfolk this year, for the pleasure of seeing some acts for the first timeand catching up with the latest work from those with whom I’m more familiar.

I’ve only seen William Prince once so far, early on in his career when he was nominated for a Canadian Folk Music Award, but his reputation precedes him. The Juno Award-winning singer-songwriter was hand-picked by Neil Young to open several dates. I very much enjoyed that early live performance and the recordings of his gentle, heartfelt songs, full of emotions that run as deep as his husky voice. Raised on the Peguis First Nation of Manitoba, he started playing guitar and piano when he was nine years old. In William’s expert songcraft, you can hear his old country influences: Johnny Cash, Kris Kristofferson, Willie Nelson. I can’t wait to check him out again.

Gangstagrass sounds like their live show will be a hoot-and-a-half. Their Emmy Award-nominated blend of bluegrass and hip-hop has reportedly impressed audiences from SXSW to the Grey Fox Bluegrass Festival, and their live show has garnered a reputation among fans for its dynamism and spontaneity. Hip-hop emcees and bluegrass players improvising together onstage? Count me in!

I’m stoked to see indie roots/pop singer-songwriter, multiple Juno Award nominee, and double Polaris Prize short-listee Kathleen Edwards. She’s gently strolling back into the limelight after quitting the music business in 2012 (and opening an Ottawa-area coffee shop called Quitters), on the heels of being diagnosed with a mood disorder. She’s a perceptive writer and an engaging singer with a wicked sense of humour, so it’ll be wonderful to hear the longtime musician play her songs again, both old and new.

The last time I saw The Paperboys live was at Summerfolk a number of years ago, when I played at the fest (accompanying co-founder Tim Harrison on accordion and background vocals, along with Paul Mills on guitar). I remember a live show with great energy, socially conscious lyrics, and a contagious sense of joy and hope. It’ll be great to catch up with them. Led by Tom Landa, the ‘Boys play an eclectic mix of everything from Mexican son jarocho to Irish jigs and reels, to country and bluegrass. It encompasses ska, soca, African highlife, reggae, soul, pop, funk, folk, acoustic, electric, and more. Eclecticism rules here.

It’s impossible not to enjoy Alysha Brilla. A Juno-nominated singer-songwriter and producer, she sets her mindful, deeply spiritual and philosophical thoughts and feelings to an enchanting mix of folk, jazz, reggae, and world music sounds. Every time I’ve seen her and her band play live, the crowd is always up and dancing, and Summerfolk should prove no exception. Alysha’s onstage banter and presence radiate a great love of humanity. Don’t miss her!

Based in Toronto, the four female members of BLISK hail from Canada, Ukraine, Poland, and Kazakhstan. Described as a combination of Eastern European and Balkan song, dance and movement, they present a hypnotic, trance-inducing sound with the use of percussion, vocals, accordion, and horn. I was once part of a band called 3 Our Tour that played a similar style of music and performed at Summerfolk in the ‘90s, so this will be particularly exhilarating for me.

He might blush at this comparison, but David Newland reminds me a little of Stan Rogers. Like Stan, he’s a Canadian adventurer, mostly in the north, who documents the land, its people, and its history in traditional-style folk songs sung in a deep, well-modulated voice. David spends his summers travelling with Adventure Canada as a Zodiac driver, performer, and host. The 2019 album Northbound: The Northwest Passage in Story and Song, showcases David as a captivating raconteur and presents a stirring, evocative musical vision of the mythic Arctic.

It’s pretty challenging in 2019 to claim a completely unique style of music. But Hildá Länsman and Viivi Maria Saarenkylä, who together form the duo VILDÁ, come closer than most. Combining yoik – the mystical, ancient singing form of the Indigenous Sami people of Finland – with the traditional accordion style of that country, the two create a very distinctive, enthralling, and highly percussive sound. I’m thrilled, by the way, to see that there are so many accordion players in the Summerfolk lineup this year!!

Jeremy Fisher’s genuine warmth and authentic compassion are a perfect match for the loving spirit of Summerfolk. Add in his disarming onstage patter and a great sense of humour, and he just beguiles the daylights out of any audience. It’s been 10 years, three studio albums, and countless tours since Jeremy started, and he’s still massively entertaining.Jeremy became a first-time father in early 2016, so now he also performs as Jeremy Fisher Junior, bringing his catchy songwriting skills to music aimed at young listeners. He’s a natural, so his performances should be fantastic – and even his kids songs, like the lovely “Turtle & Guy,” can be enjoyed by adults.

A remarkable, dynamic group from Montreal, Rosier (formerly Les Poules à Colin), are a new take on an age-old recipe: five childhood friends who still live down the block from each other, sharing a history of music-making and family ties. Their sound is a seamless and catchy blend of their strong folk upbringing, with North American roots influences that range from old-time to jazz, and some provocative and moody effects. Their repertoire is a mix of original and traditional pieces, primarily in French but with some English compositions as well, and features impressive vocal, instrumental, and rhythmic prowess. Their adaptations of traditional songs speak eloquently to their generation while retaining the beauty of music that stands the test of time. Fiddle, guitar, bouzouki, banjo, mandolin, piano, bass, and foot percussion offer a rich and varied backdrop for their inventive arrangements. The band has a reputation for taking contagious pleasure in its live performance, and I’m sure I’ll be susceptible.

Every festival should have a one-man-band. Sammy Duke is a gentle giant and quite the multi-intsrumentalist, often playing upwards of eight instruments at the same time! Friendly and unstoppable, Sammy is proficient at 13 musical instruments and is a master of the cajon hand drum. As a solo artist, he simultaneously plays guitar, sings, beats on a drum, plays bass synthesizer pedals with his foot (foot percussion seems to be a theme for this year’s Summerfolk lineup too), and plays percussion with his other foot. Even as a regular chosen sideman for Alysha Brilla’s acoustic gigs, Sammy plays bass, cajon, shakers, and tambourine, all while singing harmony. His self-deprecating charm and wit onstage, and his uplifting energy, tend to entrance and comfort audiences. You’re gonna love him.

And this is just a handful of all the outstanding performers set to rock the stages at Summerfolk 2019. It’s times like these that I wish we had our long-promised jetpacks already.