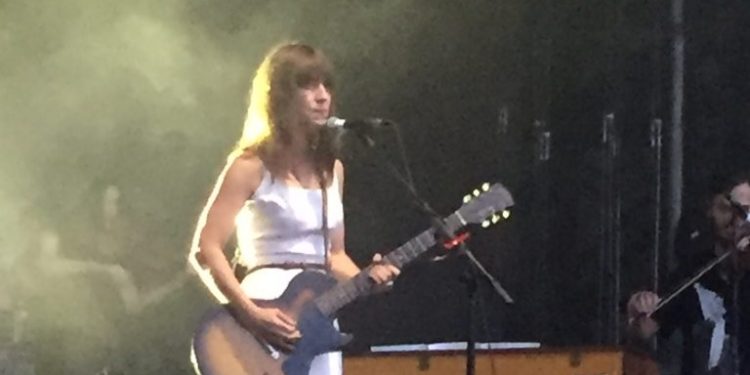 12:50 p.m.: OK, so I’m spoiled. Obviously, this is NOT the Vancouver Folk Music Festival, so I’m going to have to adjust. Getting here was easy. You park your car at BCIT for $5.25 (for the whole day), and a shuttle takes you to the festival. This is where the trouble begins. There’s a good chance it’s going to rain today, and I’ve brought a small fold-up umbrella. According to Ticketmaster’s policy, no umbrellas are allowed, even though I show my press pass and say I’ll stand way in the back. I’m given a ticket by a woman who says I can retrieve my umbrella when I leave (remember this for later). The security team are hired guns and don’t seem to have any clue about festival protocols (no one knows what “Will Call” is). I feel like I’m entering Rogers Arena or going on an international flight instead of a small local music festival. Then my (full) water bottle is taken away and emptied in a bucket. Really? In this day and age? Throw away water?! It would take less time to smell it and see it’s not vodka. There is water available to fill up empty bottles inside. Did I mention no food can be brought on site? This is an outdoor, picnic-like setting with lots of kids and babies and vegans.

“Plenty of vegan options,” I’m told, but no, that’s not the case. I won’t dwell on this except to say festival planners need to have ONE vegan truck, or at the very least, make it easier for people to find vegan options.

Other complaints (and this is before the rain starts):

1 p.m.: The first band, a power-pop Yukon group, Speed Control, has kicked off the festival. They’re a great, high-energy opening act, but I’m still busy trying to orient myself to less-than-perfect conditions.

And now it starts to drizzle.

I’m writing, but my paper is getting wet. Off to the left side of the field next to the porta-potties is a big tree, so I move there and am able to keep fairly dry. I can see the stage, I can hear really well. The only downside is the constant slamming of the porta-potty doors. As you can tell, I’m in a foul mood. An announcement is made that they’re selling $5 ponchos in the merch tent. Grrrr. If I had my stupid umbrella I’d be fine.

2:10 p.m.: Next up is Southern Avenue, a five-piece funk-soul band from Memphis featuring sisters Tierinii (dynamic lead singer and front person) and Tikyra (powerhouse drummer) Jackson. They’re on the road 300 days a year. THAT’S how you get this tight. One song goes by, and I can’t believe it but I’m actually smiling! I even walk up to the stage and take a picture.

It’s a good thing the bass player is amazing (think James Jamerson or Bootsy Collins) or I’d have to move even further away from the stage (remember the bass volume issue I talked about). This is a band that with a little more of a stage show will be a festival favourite.

2:45 p.m. Now the rain is really coming down, and everyone is moving under “my” tree and talking. I email my editor saying I might not make it through the day. Gee, if only I had brought an umbrella! A couple of guys are kicking around a small child-type ball. I’m watching to see if security will come around and confiscate it because it clearly says, “Prohibited on-site: frisbees or balls.” I’m summoning all my Zen training (pretty much none), because I really want to hear the rest of the artists.

3:12 p.m.: Juno and WCMA-winner William Prince is a quiet, thoughtful, introspective storyteller. I’ve seen him before, and he needs quiet from the audience. After shushing everyone around me there’s only the occasional slamming of the you-know-what doors. William is perfect for the weather. With his deep voice and dark, yet still hopeful lyrics, he gets everyone to sing along (“I’ve never been so lost no, no”), and a calm seems to take over (at least it does on me). He’s king of the two-chord songs, sometimes stretched to three, but the music’s simplicity allows for the storytelling to be front and center.

3:40 p.m.: The rain stops. I move away from the slamming doors and get something to eat. I have two choices: a falafel wrap at one truck or a falafel plate at another. I choose the wrap because they have sriracha sauce to replace the dairy tzatziki sauce.

4:05 p.m.: I almost need sunglasses. I email my editor and say everything’s OK.

Next up is War and Treaty. I was expecting a duo but a whole band, including horns, is setting up.

4:25 p.m: So, the sun is out, I’ve just had vegan, maple walnut ice cream, and I’m in front of the stage. It’s like the festival has begun. My mood is great! The War and Treaty (I don’t really get the name) has kicked it into high gear. The temperature has literally and figuratively gone up 10 degrees. It’s rockin’ gospel on 11. Whereas Southern Avenue was 60s-70s funk-soul, War and Treaty are late 50s and early 60s soul-gospel like Ruth Brown, Ray Charles, etc. The music is right from “the church,” “the devil’s music,” and the crowd goes wild.

5:40 p.m.: Time for a beer. I pass a really cute, practically newborn, baby and then sit and drink with some strangers who I jokingly refer to as the “bummer table” (guns, shooting, cost of living in Vancouver), but it finally gets around to why living in Vancouver is so amazing.

Dan Mangan is setting up. Dan is another of the Canadian artists that I’d never heard of until moving here. Everyone here knows who he is and have been fans for years. The festival is running a little late, but Dan and his three-piece backing band finally start. I forgot to check but I think it’s around …

5:50 p.m.: I’ve moved up close to the stage, but to be honest, I’m not expecting to like him much. I’ve heard a few things on the radio and was not that impressed. I want to see what the fuss is about.

Something’s off in the first song. It sounds like he’s singing in a different key than the band. He’s not playing guitar. The second song is a little better. Maybe he just sings a little flat. No one else seems to be bothered. Song three starts with just Dan and his acoustic guitar. It’s simply beautiful. So maybe he’s not the best singer. Maybe his strength is in his “everyman” anthems. I’ve heard this song before. It must be an old one. It’s got the line “It’s a crying shame.” The number of people now standing up in front of the stage instead of sitting increases. He’s got this audience, and I’m starting to get it. Song number four, and I’m a fan! The melodies are unusual, I can’t hear all the words, but I feel the emotion in his imperfect singing, and I’m moved. I stop writing, stand up, and become one with the music of Dan Mangan. I’m singing along. I’m singing harmony. “Robots need love too. They want to be loved by you.” I adore “Leaves, Trees, Forest” and “Cold in the Summer,” his song about being on the road and the one about getting older. I LOVE his singing!!!! I’m woo-hooing and yelling, and when it’s over, a guy standing next to me, who is obviously a long-time fan (he knew every word to every song), said to me, “That was great,” and I replied “It sure was.” I just had a festival experience.

Rain? Umbrella? Food? Who cares? It’s now all worth it. I’m going to be diving into all of Dan Mangan’s music. I need to catch up, so next time I’ll know all the words too.

6:30 p.m. or so: There’s a half-hour break until the next band, Lord Huron. I get in the corn line and think about how much money I could make if I had a dental floss stand.

7:00 p.m.: Lord Huron’s look is right out of the HBO series Deadwood, but only the really good-looking actors. The music is dreamy and old western-themed. The band is good but maybe because of the experience I just had with Dan Magnan, or not, it doesn’t reach me. There’s a sense of authenticity that just isn’t there. It feels scripted, and after reading about the band’s creator, Ben Schneider, I think it kind of is. I would definitely give them another chance, but I’m not open to whatever it is they’re trying to accomplish tonight.

8:30 p.m.: It’s finally dark, and there’s one act left. The headliner: Feist. I have absolutely no idea what to expect. Sure, I know and like “Mushaboom,” “My Moon My Man,” and “1-2-3-4,” but that was ages ago, and I have not kept up with her. I see lots of interesting looking instruments being set up: bass clarinet, bari sax, flute, violins, electronic gear.

8:45 p.m.: Wow. Just wow. She’s amazing. This is NOT easy music. It’s extremely challenging. If Kate Bush had a punk sensibility??? Feist whoops, yelps, thrashes, loops, and cajoles in a long white dress and boots. It’s not blues or roots. It’s Feist. It’s experimental. She’s a singer. She’s a songwriter. But this is NOT singer-songwriter music. It’s beyond that. It’s a sound experience. “My Moon My Man” is not like the record. The pop veneer is gone. It has a harder edge. Everything is rhythmically driving and intense. Her music is ethereal yet gritty. Her guitar playing is unique. and when she does a solo version of “Mushaboom,” it becomes a modern Delta blues-like song with looping and audience participation at the end. Her live version of the song was a complete re-imagining of the original.

One last thing to do before I take the shuttle back to the parking lot to drive home is to pick up my umbrella. I find the ticket I was given and head to where the woman said she would be. I get there, and guess what? There are about 300 umbrellas laid out on two tables! No one there to take my stupid ticket. There’s a different woman who knows nothing about a ticket. Do you know how many small black umbrellas there were? At least 150. The new woman encourages me to just take one. I pick up a small black umbrella that is not the one I came with.

I think about the music and walk away laughing.