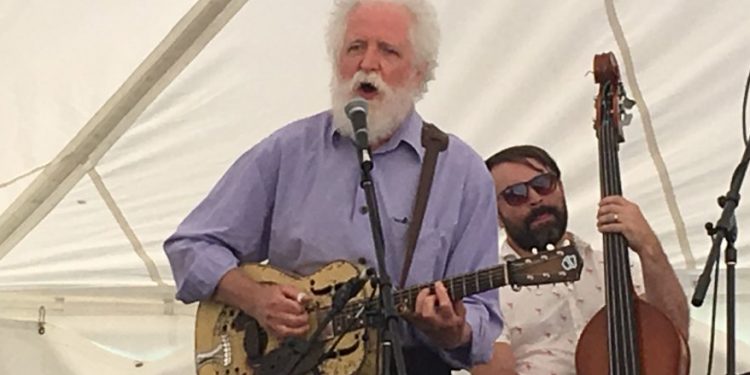 11:35 a.m. – I arrive at the Make a Joyful Noise workshop as Jennifer Holub has the audience singing along with “Will the Circle be Unbroken.” Then Ken Whiteley, who has honed his charismatic faux preacher man charisma as the host of many Sunday gospel sessions at Hughs Room Live in Toronto, called upon the spirit of secular humanism before leading the crowd in a rendition of “Ain’t Gonna Study War No More,” to which he improvised a couple of verses – including one that had us all up shaking hands with each other just like in the sharing of the peace ritual at Anglican church services. Needless to say, everyone just stayed on their feet after that. And although the song ended just six minutes before the scheduled end of the workshop, the audience insisted the performers push straight to time. Thus we were treated to sing-along covers of “Amazing Grace” and “l’ll Fly Away” before the crowd erupted into a standing ovation . 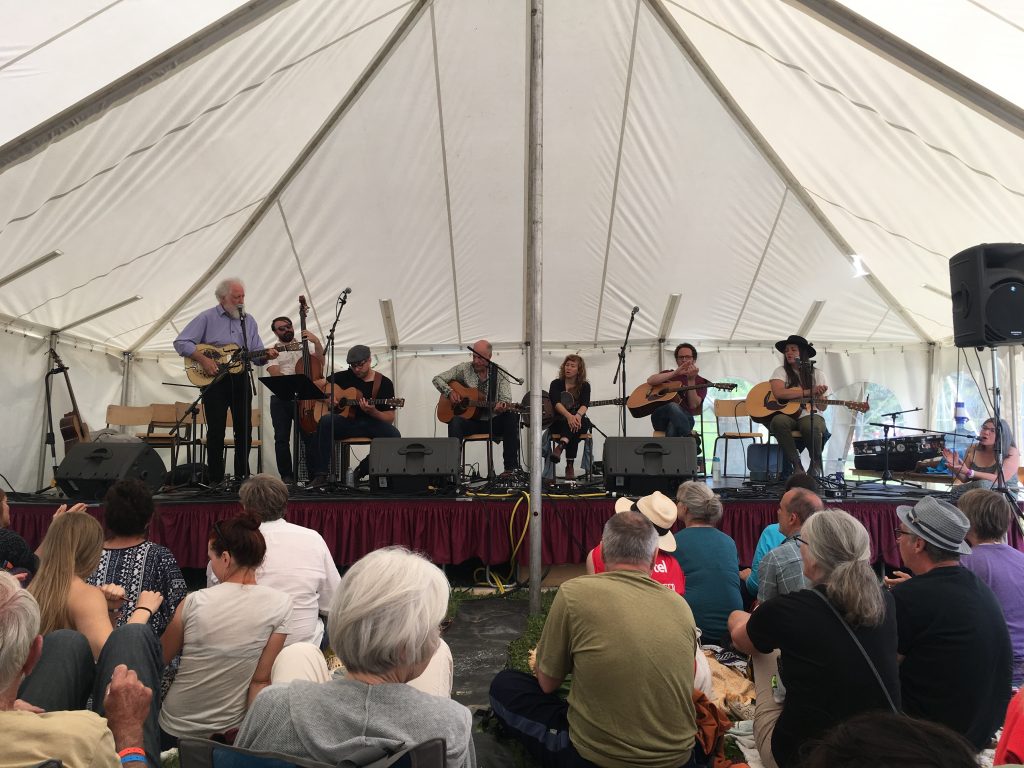 12:15 p.m. – I’m at the Hakka workshop presented by Mama Mihirangi and the Mareikura.  Mihi has just finished discussing cultural misappropriation with us in this context.  She tells us that the Hakka is a ceremony, and the workshop is designed to give us an experience of it, but it is not an experience for us to share or teach to others.  She asks us to raise our hands if we agree to those terms.  Everyone does.  With that, the workshop proceeds, and I will say no more about it.  Gratitute to Mihi for sharing it with us.

1:25 p.m. – I’m at a workshop called Coming Down – the final workshop of the weekend. Robin Ranger is hosting, and he’s still not over how awesome this festival experience is. As I mentioned yesterday, Robin is clearly moved to be in an environment where people pay careful attention to the music being performed and look after the artists who are performing it. Now he’s conversing with the audience about whether the festival is always this awesome, if other festivals are this awesome, and what parts of the experience we find particularly awesome as audience members. (Answer: watching disparate groups of acts jamming together on workshop stages). Watching a grizzled veteran of the local bar and restaurant scene discover the magic of folk festivals for the first time has definitely put a smile on my face all weekend.

I actually came to this workshop to check out Rachel Romu, and she’s a lot of fun. Rachel is a young woman from Thunder Bay with a connective tissue disorder called Ehlers-Danlos Syndrome, who models, plays music, and uses her platform to advocate for people with disabilities. Accompanying herself on electric guitar with her brother tapping out some rhythms on a sampler – a stand-in for her regular accompanist, she said – she sang some very pleasing alt.folk-pop and took advantage of the casual workshop format to try a song that wasn’t fully formed yet. Hilarity ensued, as it did again later in the workshop when her brother’s novice efforts on the sampler went a little haywire. She helped close the set by playing some chords on the sampler in an effort to launch a jam with the other members of the workshop – Robin and Dana Sipos. None, it turns out, are super comfortable jamming, but they made a valiant effort. I’m definitely eager to hear more from Rachel. 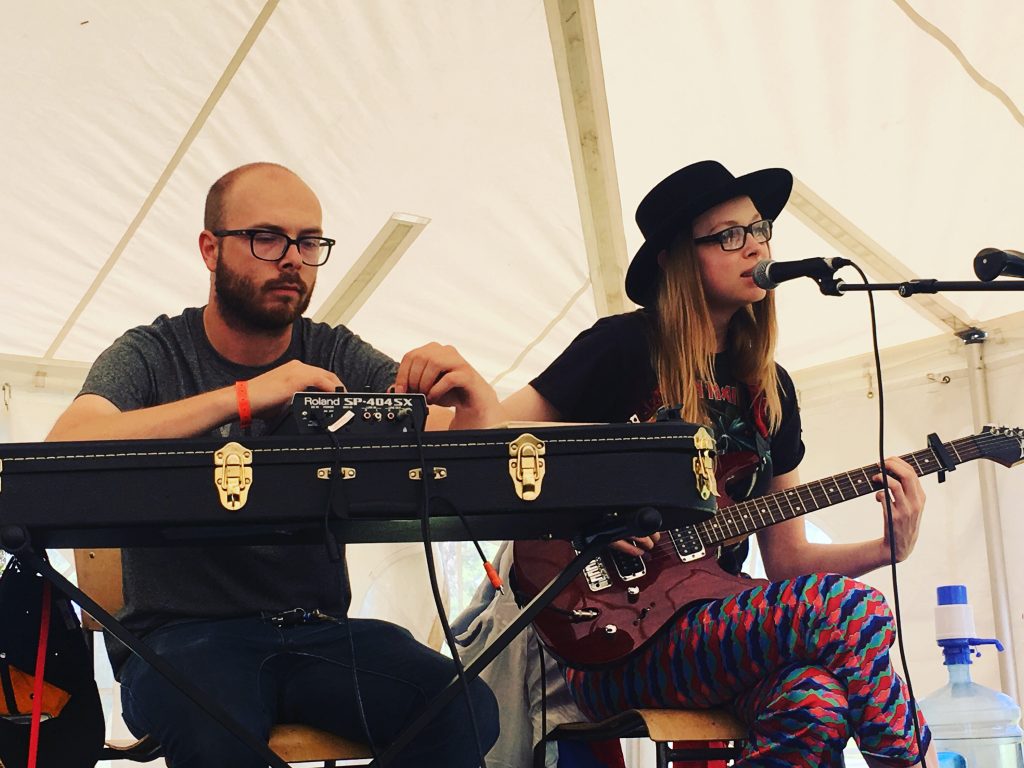 3:51 p.m. – Roxanne Potvin, decked out in a flowery sun dress perfect for the sunny weather, is playing an equally sunny set of songs with a subtle emphasis on girl power – like the breakup song in which the woman describes how little she misses her partner and the song that salutes all her good girlfriends. She’s been trying to write new songs, she tells us, but honestly, she’s in a good relationship, and life’s kind of awesome right now, and all that, well, sunnyness makes it hard to find inspiration. Having said that, the happy song she wrote for her boyfriend sounds good to me! 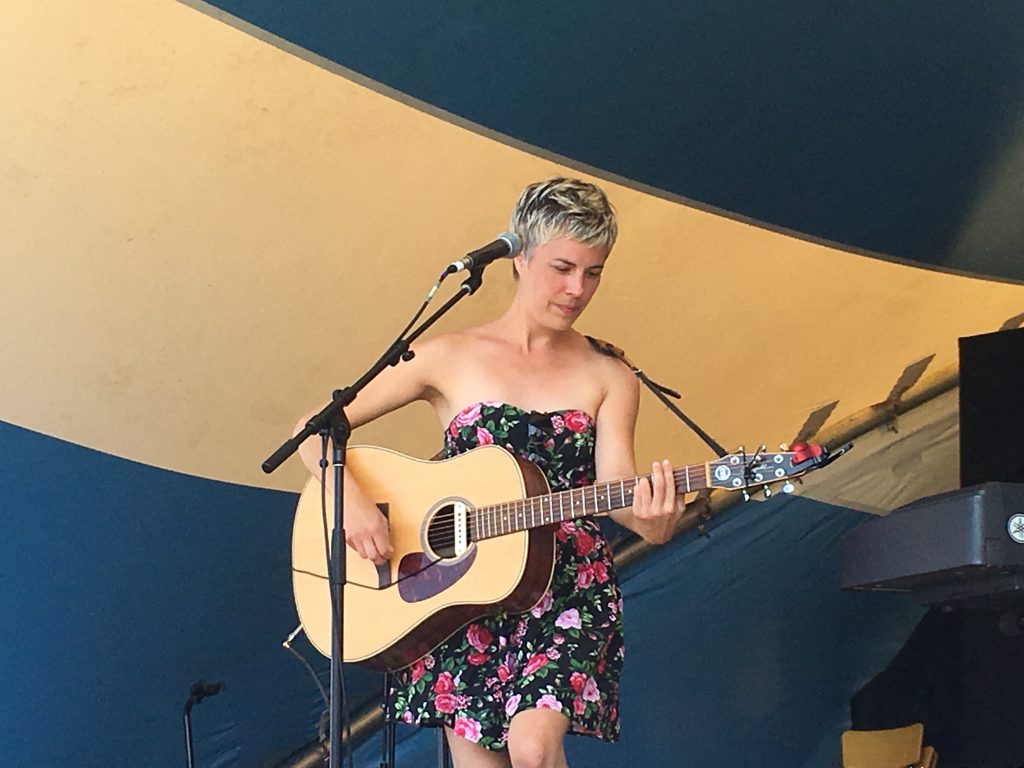 4:25 p.m. – Ken Whiteley is entertaining the audience before his set has even started.

“This is the soundcheck,” he says, “but you’re all so attentive.”

Shortly thereafter, he officially launches the performance that will close the mainstage and the festival. It’s so nice to sit in the sun on a Sunday afternoon and be entertained by such a consummate entertainer and a veteran artist so overflowing with talent. Ken’s performance on the mainstage leans more toward folk and gospel than toward the blues for which he is also known. He does a rendition of “Buelah Land” from the Buelah Band album, then he invites a gaggle of other performers on stage, including Benjamin Dakota Rogers, Liv Cazzola from Tragedy Ann, Roxin Potvin, and Saturday mainstage opener Greg Smith, to perform “It’s Golden” and “Gospel Music Makes Me Feel Alright.” The latter brings the set to a close. 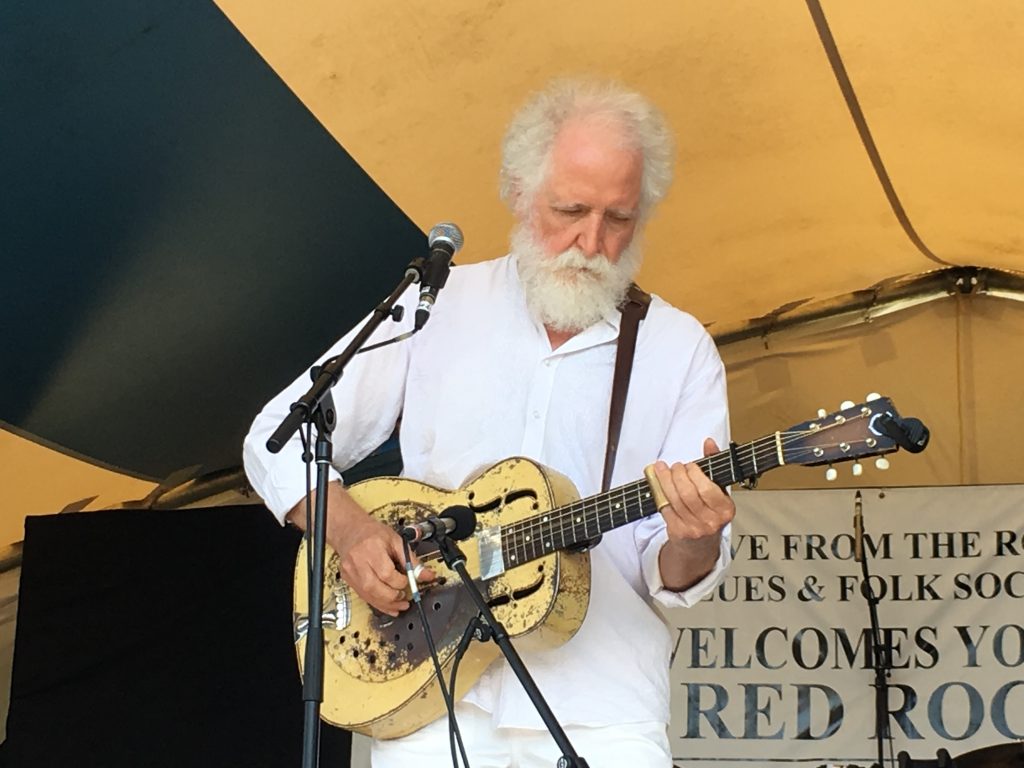 Hands down, between this set and this morning’s tent revival session, Ken Whitely has been the star of this day at the festival.

By the way, I survived the dreaded trip to the porta potty. Thanks for asking. And thanks, Braden from Tragedy Ann, for watching my stuff while I went.

OK, that’s it. They’re launching into the closing ceremonies now, which includes an annual sing-along performance of Ian Tamblyn’s “Woodsmoke and Oranges” – I imagine because Ian is from this region, though I’m not sure if there’s more to the story. Anyway, I’m heading back to the wifi area to do some more editing.

Thanks for an amazing festival, Live from the Rock!