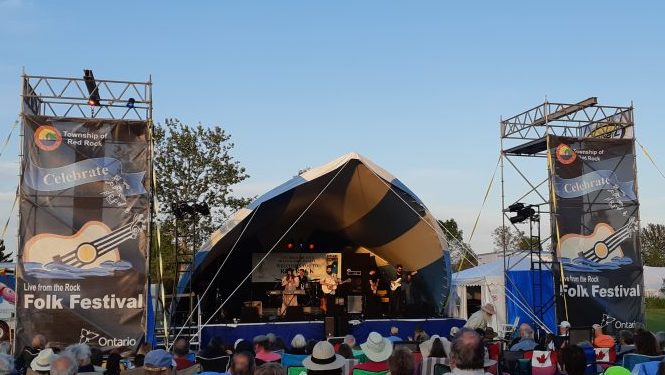 12:30 p.m. – I’m settling in at the festival for the day while a workshop called Northern Roots unfolds on the mainstage, featuring Cindy Doire, Dana Sipos, and Tragedy Ann. This is a fantastic little line-up of youngish talent with many highlights. Among them: Cindy’s cover of “V’la l’Bon Vent,” Tragedy Ann’s tribute to the London town crier who spends hours each day calling people to wish them Happy Birthday, and Dana’s protest song for the Yukon waxwings — victimized by a scheme by conservation officers to build drunk tanks for them after deciding they were getting too shitfaced on fermented berries.

1:59 p.m. – Having finally figured out where the Dockside Stage is, I’m settling in to watch the 807 Representin’ workshop featuring Robin Ranger, Phil Drost and Cassidy Houston. This would be acts from northwestern Ontario, for those unfamiliar with the area code. Local jazz player Robin Ranger, who spends most of his time playing bars, is telling the audience how nice it is to be in a room where music is the focus rather than a part of the atmosphere, and how it presents an opportunity to play some songs that wouldn’t fly at your run-of-the-mill corporate elevator music gig. With that, he launches into a smoky vocal jazz number a la melancholy Louis Armstrong. The audience is rewarded for paying attention.

The most promising voice on this stage, for my money, is 21-year-old Cassidy Houston, who’s possessed of a powerful and expressive voice and a charming stage presence.

“I haven’t had a lot of life experience, so I write a lot about break ups,” she says to laughter.

Seriously, Robin Ranger is kind of a revelation here too. It’s amazing what the right performance setting can do for an artist you’re used to seeing in the background – or as an opening act on a stage far to big for his intimate sound. Somebody put Robin in a 20-seat coffee house every now and again. Judging by the loud applause that’s been following his songs, I’m not the only resident of the 807 that’s caught off guard – in a good way – but how sweet he’s sounding here. 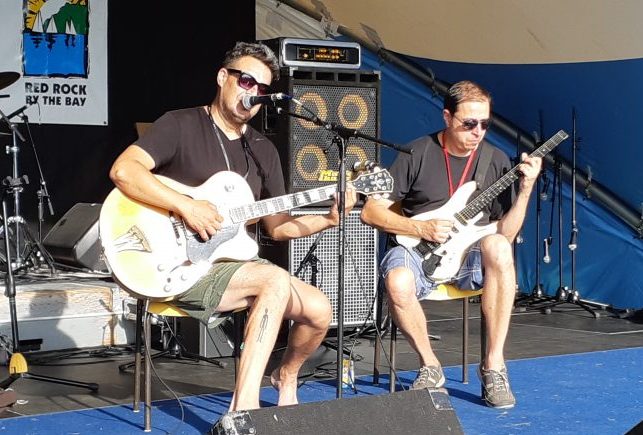 Robin Ranger, left, on the mainstage. Photo by Veronica Kovacs.

12:26 p.m. – Wait. Didn’t Cassidy just say she lacks life experience? Ok, she’s just introduced a song about a close friend dying. And “Nothing to Lose” was a big song. Now she’s invited the audience to sing along on a cover of “Dreams” by Fleetwood Mac. When checking out a new artist it’s always telling how well they do at covering other people’s big numbers, and she’s doing great – well, apart from realizing she can’t remember the first line and needs someone to give her the first word. Someone dutifully does. But then she gets to the second verse and bursts out laughing realizing that she again can’t remember the first line of the verse. She’s joking around with the audience about it like a pro, explaining that her best friend is in the audience watching her for the first time, and she’s totally distracted by it. All the same, she’s really struggling, and here I am typing away on a laptop that is actually connected to the internet because – crazy – this is an indoor stage with wifi. Do you think anyone would mind if I just pull up the lyrics on my screen and put my laptop up on stage for her? OK. Hang on. I’m going to go do that. Talk to you in a minute.

12:50 p.m. – What a gal. She even gets up off the stage to bring me my laptop back after the song. Go see Cassidy Houston, everyone. She’s a great singer, she’s great fun on stage, and she has impeccable manners. By the way, she had the audience singing along on “Dreams too.” Good on her.

3:12 p.m. – Hunt and Gather are doing a song called “As the Crow Flies” on the Bayside Stage during a workshop called Unplugged. There is a surprising number of electric instruments onstage for a workshop called Unplugged, but if you can get passed the liberal interpretation of the theme, the music is sounding pretty good. I’ve never heard “As the Crow Flies” plugged in, but honestly, it’s so well-crafted, I can’t imagine a better showcase for it than this pared down arrangement. 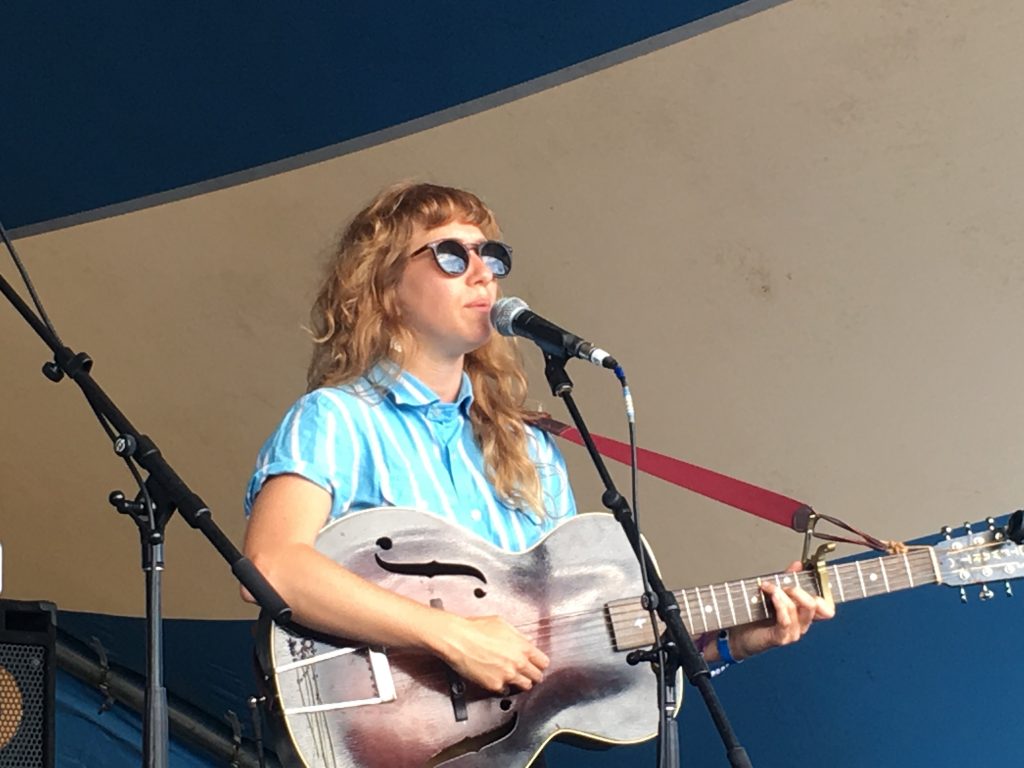 Dana Sipos on the mainstage. Photo by Heather Kitching.

Nadjiwan, a.k.a. Thunder Bay-born, Toronto-dwelling Marc Merilainen, does an opening number called “Daylight Night,” which is beautiful and impassioned — and although it is pretty plugged in sounding, he’s also accompanied by an acoustic wooden flautist who absolutely makes the song.

4 p.m. – I’m sitting on a picnic table in the shade outside the interpretive centre here in the park, editing this here web site and eating the vegetarian chili I picked up in the food truck area. It turns out my favourite vegetarian food providers are here this year. It’s a Legion, in fact. They just weren’t open when I arrived yesterday. There’s also a purveyor of fine Middle Eastern food. Oh, and did I mention free wifi in the interpretive centre? Talk about festivaling in style.

4:45 p.m. – Wait. There’s a pub building here? Veronica Kovacs has just arrived, and I note with excitement that we could go have a drink before the mainstage gets started. So that is what we do.

6:44 p.m. – I’d been looking forward to seeing Dana Sipos on the mainstage, and I wasn’t disappointed. There’s just something about that voice of hers. It’s mournful and lonesome and evokes wide open skies and hollow landscapes to the point that I keep expecting wolves to start howling when she sings.

7:09 p.m. – Robin Ranger is in the midst of his mainstage set and is once again talking to the audience about his sincere gratitude for getting to experience the culture of a folk festival. You know, a culture where people pay attention to the music. It’s still early, and a lot of people aren’t in their seats yet. Others are chatting farther back in the audience. But there is a solid compliment of people sitting quietly, appreciating his mellow, vocal jazz, Louis Armstrongesque vocals and Cohenesque vibe, and he’s feeding that energy right back at them. 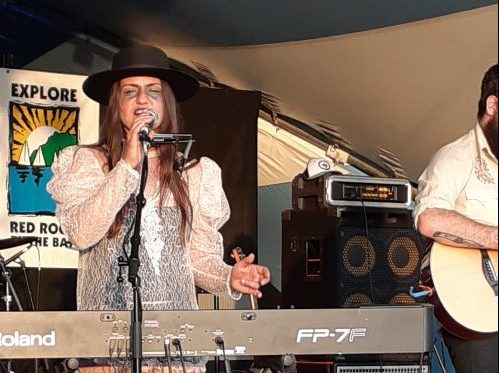 9:12 p.m. – Jennifer Holub is just finishing up her kick-ass set with her band, the Erratics, a.k.a the band formerly known as Murder Murder. After four straight sets of perfectly divine stripped-down folk and jazz, the last 45 minutes or so have been full-on full-band country pop – and a well-paced set at that, mixing balls-to-the-wall rockers and moving down-tempo numbers in equal measure. Jennifer, dressed in what appears from this vantage point to be black underpants and a black camisol topped with a floor-length, see-through, pink chiffon poofy-sleeved coat, isn’t nearly as scary a personality on stage as the band of black eyeshadow across her eyes might suggest. She’s actually downright sweet and likeable. Her set is definitely the standout so far.

10:15 p.m. – Cindy Doire of Scarlet Jane fame just finished up her solo set on stage. She was performing with just a guitar and keys, but she had programmed accompaniment to give her sound a bit more oomph. She sang mostly in French, and her numbers verged on chill-out territory at times, which was a pleasant soundtrack to the sun going down. She closed her set by inviting any singers in the audience on stage with her to vocalize on her final number – and several took her up on it, including opener Greg Smith and the members of Tragedy Ann. And I could swear that was former Green Party MP Bruce Hyer up there too. I didn’t hear anyone singing off key, so clearly this is a hidden talent of his.

11:27 p.m. – Mama Mihirangi and the Mareikura have just earned the first standing ovation of the night for their set, which combines elements of traditional Maori music, dance and culture with looping, electronica, and original compositions. It was a wildly varied and spectacular performance that featured poi dancing and other traditional dances, modern takes on traditional prayers and songs, and a Hakka for missing and murdered Indigenous women and girls, something Mihi said today (Sunday) she sought permission from the local Anishinabe to perform on their territory. Mihi, who I had the pleasure of working with 12 years ago during her first tour of Canada, was so exuberant in her performance that she told the audience at one point that she had accidentally punched herself in the face and caused her lip to bleed (a volunteer dutifully brought her some tissue). At another, she began to cry as she recounted the history of sexual abuse in her family dating back to the era when the chief of her community sold her great great grandmother for marriage to an American in a futile attempt to hold onto their land. Mihi has the rare gift of being both larger than life and yet tremendously down to earth and human – both on stage and off. And that quality really shone through in her performance. It was a riveting end to our evening.

With that, Veronica Kovacs and I, old folks that we are, packed up and began the 70-minute or so commute back to Thunder Bay while Thunder Bay band Hunt and Gather began their closing set. 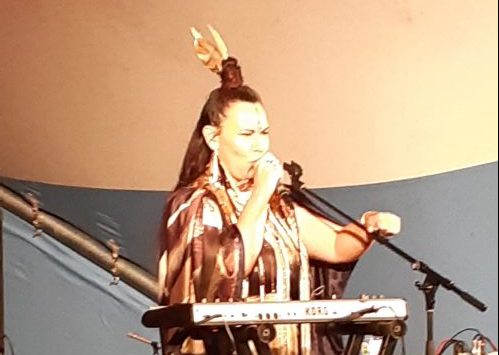