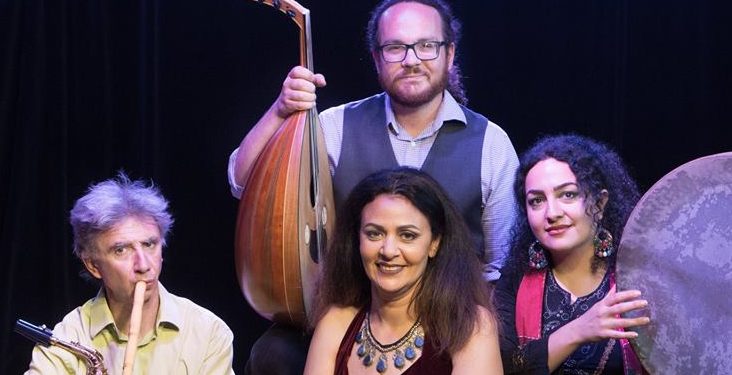 Cairo Moon is the newest disc showcasing the many vivacious talents of Toronto’s modern Middle Eastern quartet Al Qahwa. With this sophomore record the four core members bring their multi-channelled talents and Greek/Iranian/Egyptian/Canadian heritages back together to envision an exotic and political international airspace filled with halos instead of helicopters.

Their repertoire ranges from Sufi meditations to prayers, improvisations and original compositions, as well as traditional and classic songs selected from the golden age of Egyptian film. Cairo is known as the Hollywood of the Middle East, and so it is no surprise that this record is cinematically evocative of serpentine dancers, keening birds and ornate minarets.

All are projected vividly on our inner earscapes by Ernie Tollar’s amphibian suppleness on saxophone, duduk and nay flute; Nagmeh Farahmand’s limber and languid (and occasionally funky) percussion ripples on the membranes of her dumbek, daf, udu and bendir; and Demetri Petsalakis’ virtuosic energy on the prismic strings of his oud. Cairo native Maryem Tollar’s insistent, exploratory singing brings a dancer’s energy and persistence to her navigation of the complex melodies, mediating the co-existence of major and minor scales with her gentle phrasing and then escalating abruptly into passionate party fervour on the rocking “Cairo” and the passionate release of the album’s closing track, “Nightingale”.

Episodes exploring the immigrant’s quandaries in absorbing the effects of cultural transience (“The Dream”), the exultant poetry of William Blake’s “The Lamb” (“Little Lamb”) and a meditation on the horror of a massacre in a Coptic church (“Blood”) comprise the lyrics of the first three songs on the record, showcasing the scope and depth, the world of butterflies and demons, that the band can collectively conjure.

”You sell the things that are valuable to us for cheap, for nothing,” she sings in “Blood.”

Reflecting on the lyric, she adds, “It’s applicable to so many things happening now: selling our water for nothing. ‘You imprison the children, and you kill our youth,’ it says. I think of those families on the U.S. border. And then, the blood of these innocent people is a debt, and the day of reckoning is coming. And then after that we put in an instrumental, just so you can process all that.”

The instrumental in question, “Sama’i Blues,” is a sinuously moaning sequence of riffs in 10/8 time, which features guest luminary professor Alfred Gamil’s violin interrogating Ernie’s reed vectors and culminating in a final unison duet of playful blue cadences. Gamil will also be flying in to join the band at their Hugh’s Room Live CD launch in Toronto this Saturday, Aug. 10. The concert will also feature special guests Waleed Abdulhamid and Fethi Nadjem.

Evocations of Egypt are articulated in the architecture of the next three songs, “You & I,” “Beloved Mother” and “Memories,” all of which embody echoes of the emotions of Maryem’s childhood. The album, she says, is “a love song to Egypt.” Following a solo clarinet improvisation by Majd Sukar, the title tune, “Cairo,” an original composition by Demetri, lets Maryem share an affectionate autobiographical sketch of her early enjoyment of a city with “cats everywhere … smoking and bellydancing with the neighbours.”

Romantic nostalgia informs the moods and lyrics of the subsequent songs. “Full Moon Prayer” solemnizes “the light of the night,” painting the shadows and euphoria of night-time coffee house culture (the band’s name in Arabic means “the coffee house”) where communities historically congregate to exchange news, stories and songs.

“Singing is the life of the soul,” Maryem chants in “Sing To Me,” and in the pulse of the song you can hear the feathering comfort of cultures comfortable with each other, gathering in song to regain control of their lives (“The Beautiful One”) from governmental overseers, and sharing their peace as they relax in the finely powdered persimmon dusk, awaiting the rising of the Cairo moon.

How growing up in Thunder Bay influenced ...