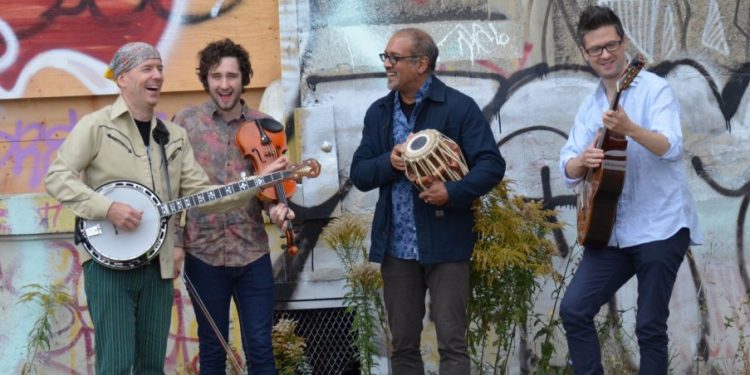 So Long Seven’s sophisticated and sometimes contemplative blend of folk, world, jazz and classical music is not the sort of thing you typically associate with the Thunder Bay, ON area and its nostalgic embrace of 80s hair bands and 90s Top 40 acts like Amanda Marshall. But the truth is, when SL7 plays the Live From the Rock Folk Festival this weekend in Red Rock, about an hour up the highway from the northwestern Ontario city, it will be something of a homecoming for Ravi Naimpally, the twice-Juno-nominated master musician behind the tablas.

Born in Kanpur, Uttar Pradesh, India, Ravi was just a year old when his family moved to Thunder Bay, where his father had taken a job as a mathematics professor at Lakehead University. It was his time in TBay, as it is colloquially known, that planted the seeds of his highly accomplished career.

“He loved Indian classical music,” Ravi said of his father, “so he and some friends across Canada started bringing musicians over and organising Canada-wide tours. We started hosting the concerts in our home, but there were soon too many people, and they started using the university auditorium. Zakir Hussain even came and stayed at our house.”

The biggest influence on Ravi, however, was the revered tabla player Anindo Chatterjee, who he first saw on tour accompanying the great flute master Hariprasad Chaurasia. Inspired, he went on to study tabla with his uncle, Pandit Nikhil Ghosh, and later with Chatterjee himself. He also earned a masters degree in ethnomusicology from York University.

Over the years, Ravi has become a revered musician in his own right, known as both a skilled performer of Indian classical music and an avid cross-cultural collaborator. He earned his first Juno nomination in the late 90s as a member of the Thomas Handy Trio, along with the late beloved fiddler Oliver Schroer. In 1997, he was named “Coolest Musician in Toronto” by the readers of the now-defunct alt.weekly Eye.

Ravi spent 11 years leading his own Indo-jazz ensemble Tasa and continued to participate in a range of cross-cultural ensembles, such as Niyaz, Constantinople, Avataar, and Monsoon. Currently, he is involved in three collectives: Near East, which plays music from India and the Middle East; Sansar, which plays Hindustani and Carnatic classical music; and So Long Seven – which combines the sounds of India with the sounds of bluegrass, folk and jazz.

His co-conspirators in So Long Seven, Tim Posgate (banjo, guitar, mandolin and fiddle) and Neil Hendry (guitar) are neighbours, Ravi explained, and the three first came together for casual jams as musician neighbours are wont to do. When they started looking for a violin player, they happened upon William Lamoureux at the Rex one night during a showcase of student bands from Humber College.

“We have very diverse tastes in the band,” Ravi said of his eclectic ensemble. “We don’t always even like the music that the others like, but that is what keeps it interesting. The nice thing is that our instruments sound great together. The instrumentation sounds like it is a bluegrass band, but the writing is anything but that. There is a lot of world, jazz, [and] classical in our music and of course some influence of various folk traditions.”

So Long Seven describes itself on its web site as bridging cultures without engaging in cultural appropriation, and Ravi says the question of how one does that is complex.

“In my opinion the intention of the artist and the respectful way in which they handle the subject makes the difference between appropriation and being a bridge between cultures,” he said. “The population of Toronto is so diverse that the majority of world music out there is done authentically and respectfully.”

“Kakabeka is a nostalgic tune about my childhood in T. Bay,” Ravi explained. “Whenever my parents hosted musicians from India or guests from anywhere, we would take them to the falls.”