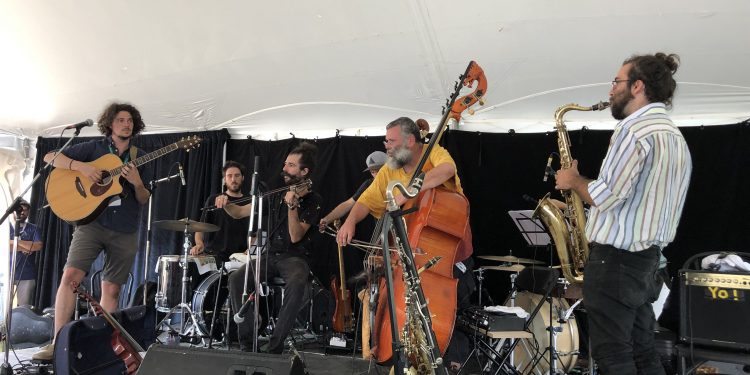 Sunday’s program started off with a blast of tunes from some of Québec’s most accomplished players at the Atelier Des Violons: André Brunet, Stephanie Lepine, Dávid Boulanger together with Vermont’s Oliver Scanlon and Lisa Ornstein from California. The gang explored their repertoire of tunes learned from venerated older fiddlers.

Lisa, who spent years studying the music of Québec, gave a little history of the traditional fiddlers she spent time with and played a tune from Harry Poitras. Stephanie played tunes from Aimé Gagnon, Isidore Soucy, and Edouard Richard. André also dug into his archives for “Reel Ben Ben Vieux,” also from Edouard Richard, and Dávid played tunes from Les Isles de la Madeleine. Oliver went in a completely different direction with an old-time tune from Kentucky, which he learned from his mentor, Pete Sutherland. It was a great set with lots of crowd-pleasing energy. 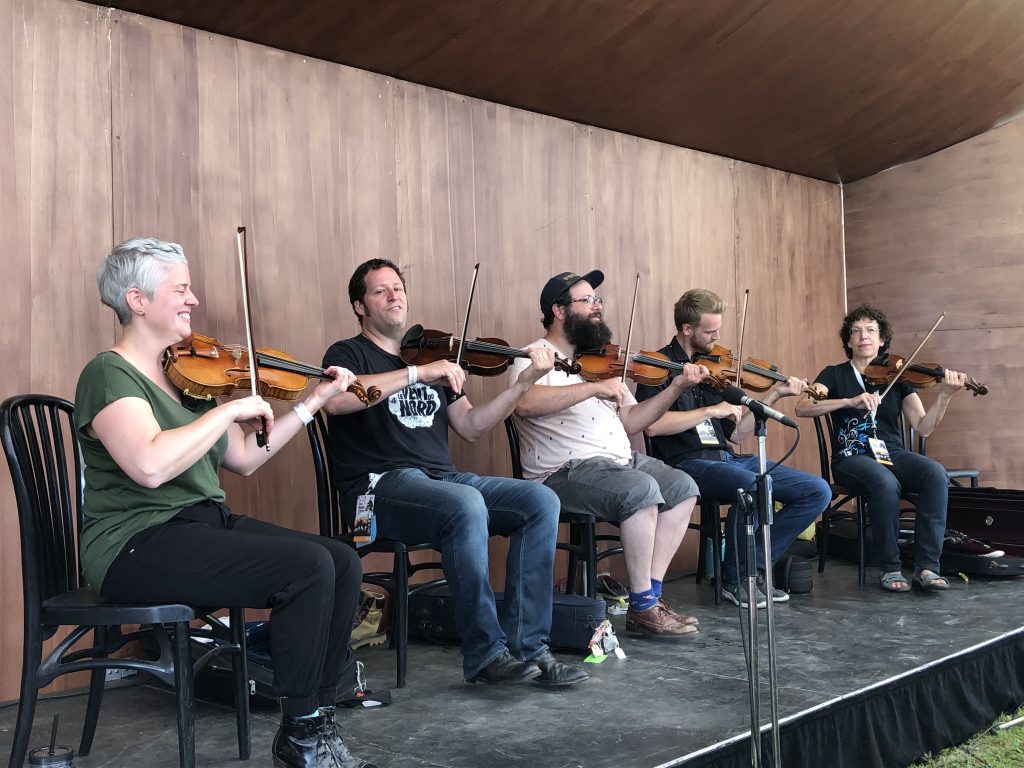 Thanks to the artistic vision of the Mémoire et Racines leadership, bands like Pete’s Posse from Vermont bring us great musical joy from across the 49th parallel.

Pete Sutherland is a venerated member of the community here, having crossed the border thousands of times to participate in musical cross pollination with most of the best players in Québec.

The Pete’s Posse set ran the gamut of the musical influences that Pete, Tristan Henderson and Oliver Scanlon have taken in over the years.

There was old-time fiddling, three-part harmony, shape note singing, beautiful slow airs from Scotland and even some original tunes composed by the band.

This set was great fun from this band of extraordinarily accomplished musicians. When you can write and sing about life, death, broken hearts and insomnia and still make people laugh, you’ve got a great thing going. 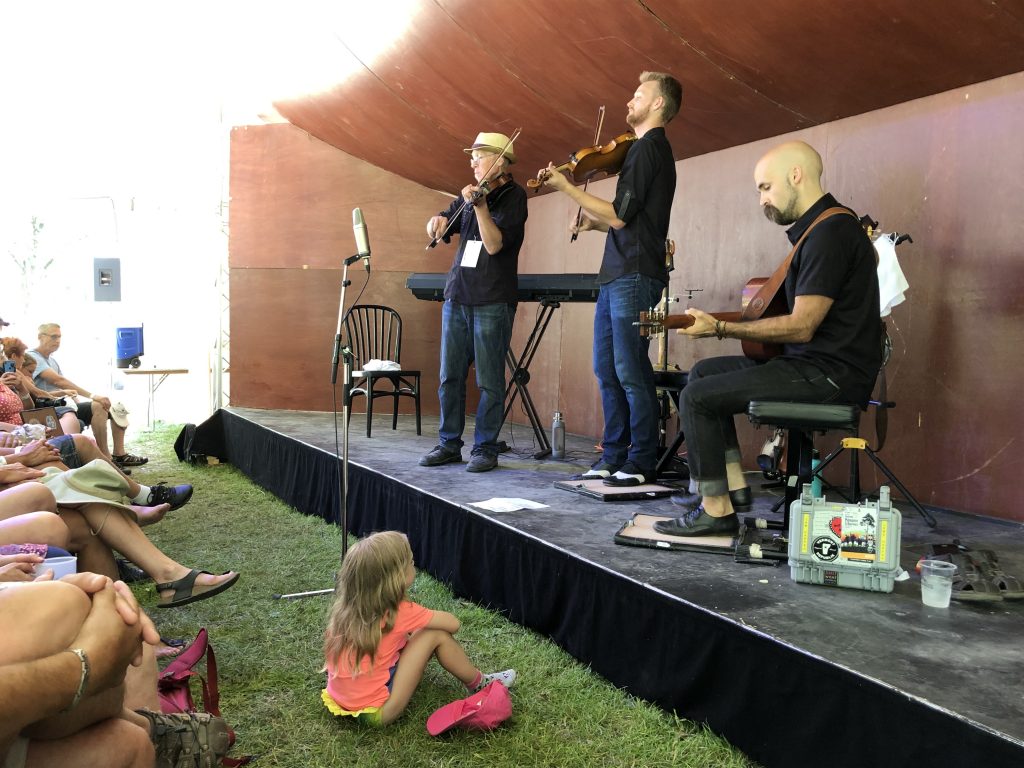 Twenty-five years ago, Réjean and André Brunet were invited to open the very first Festival Mémoire et Racines. They were 20 and 18 years old respectively, barely adults, but were already at the forefront of traditional music in Québec. Since then, they have gone on to be two of the most influential musicians in Québec folk music, and both now play in Le Vent du Nord, André on fiddle and foot percussion, Réjean on accordions, piano and bass.

The brothers opened their set today with a tidal wave of trad tunes. The set list included tunes and songs from their first CD and that first performance at Mémoire et Racines, but they also included more contemporary music, some of which they composed themselves. It really was a retrospective of where they started and where they’ve got up to in the last 25 years.

Réjean and André told stories of growing up in LaColle, surrounded by the music of their family. Their father and uncle were the original Frères Brunet, and the younger brothers followed them into playing for square dances around their region.

One of the most evocative pieces the brothers played was “Maison de Glace,” Réjean’s composition which has made its way into jam sessions around the world. The whole audience at the festival joined in singing while the brothers played.  It’s powerful stuff when you release music into the wild. You never know what will happen. 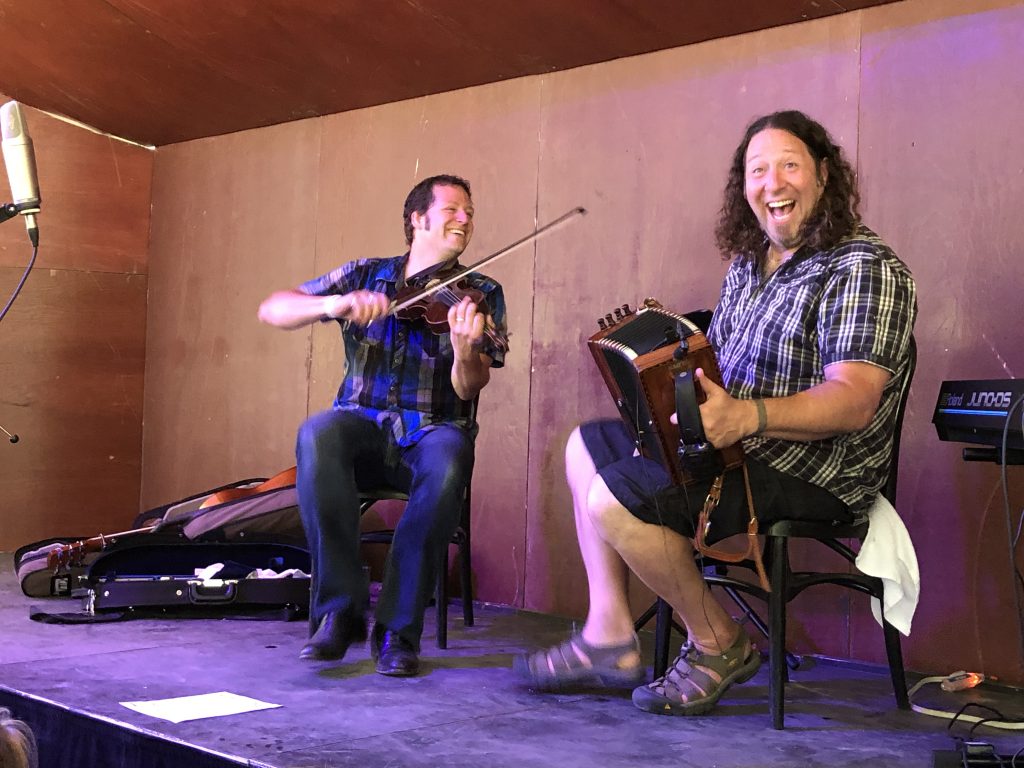 That was the reaction of the audience to this afternoon’s performance by L’Oumigmag.

Billed as a fusion of trad, progressive and jazz music, this six-piece ensemble had everyone spellbound. Two percussionists, fiddle, viola de gamba, guitars, electric and acoustic bass, saxophones and clarinet filled the stage. They started out the set with a really cool groove, very theatrical and off-the-planet evocative. We felt we were floating during this concert, the music giving aural form to clouds in the sky and waves in the ocean. It was all about textures in the music. 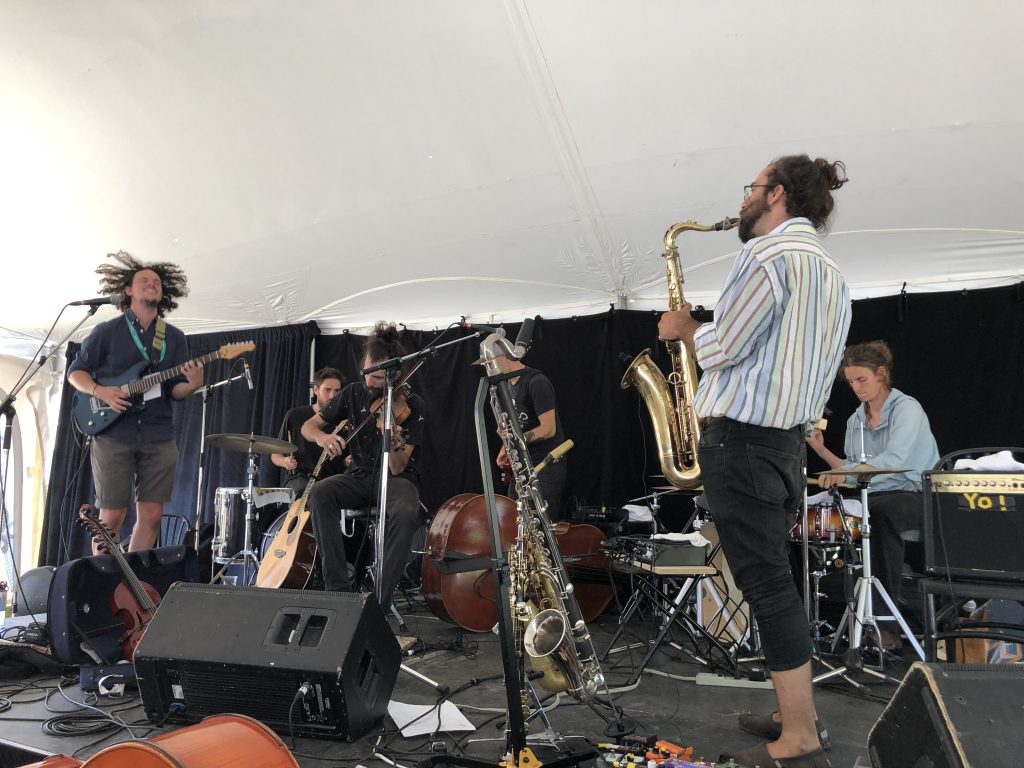 Composer-guitarist-poet Sébastien Sauvageau did an amazing job putting together this project, which was the premiere of Habitants, the band’s new CD, which will be released in September.

For the penultimate piece in the set, L’Oumigmag was joined by the extraordinary bassist Sébastien Dubé, who has been the invited guest during several other performances this weekend. Joining L’Oumigmag, he stunned everyone in the audience riffing experimentally and improvisationally on his huge contrabasse that dominated the stage. It was as if he’d been waiting all his life to play with this ensemble.  Simply a stellar performance by all. 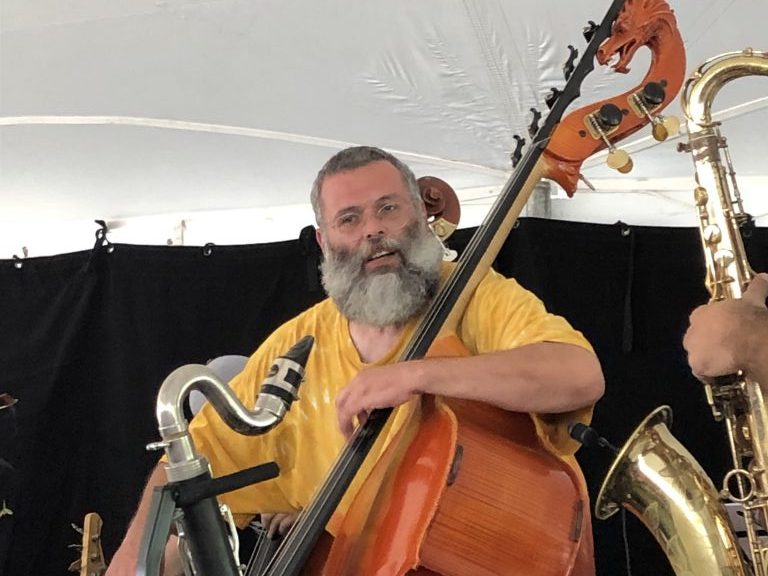 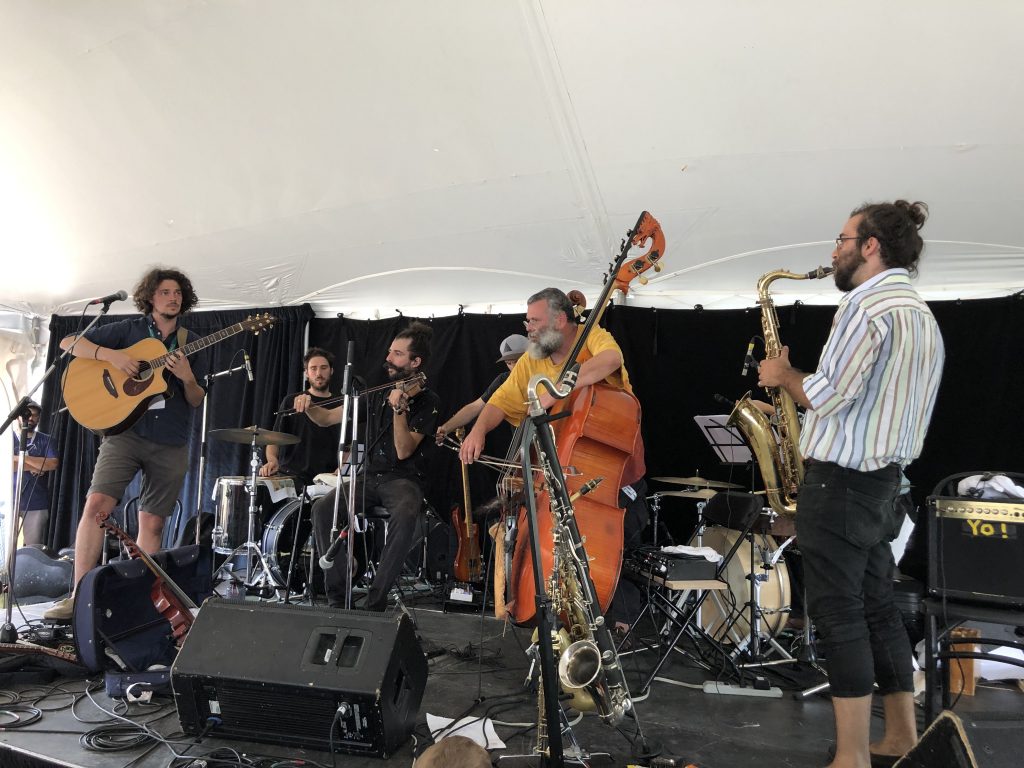