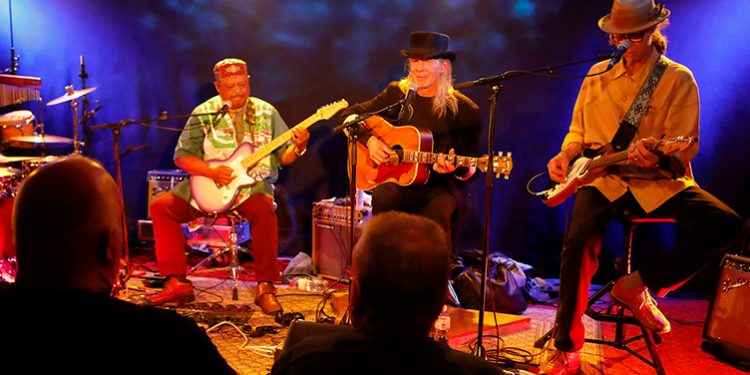 The Vancouver-area folk festivals may be over for another year, but the great folk, roots and world concerts are just getting going for another season – well ok, like Vancouver itself, the Rogue Folk Club doesn’t really have seasons in the traditional folk club sense of the word.  It’s putting on shows almost year-round, and that’s great news if you were worried you’d be starved for good music after the festival was over.  Nope!  Check out these shows that are just a few days away!

For more details and tickets check out www.roguefolk.bc.ca.

Tri-Continental is a Juno-winning collaborative evolution that fuses the talents of three wonderful guitar players, singers and songwriters. Bill Bourne is a masterful guitar player and improviser blessed with a vocal charisma of great intensity. A popular solo artist and songwriter, his past work also features a stint with popular Scottish folk outfit Tannahill Weavers. Lester Quitzau plays soulful acoustic and electric folk, blues and roots music with an understated mastery and grace. He is known for exploring the space between the notes as much as the notes themselves. Lester’s musical roots run so deep he can craft a musical cloth that quilts together ringing peals of West African-sounding guitar with the feel of free-form jazz, threaded through with unmistakable strands of gutbucket blues. Madagascar Slim, from Antananarivo/Madagascar, is a good example of a truly bi-cultural artist. An expert in the popular Salegy dance style featuring intricate fingerpicking patterns, his life was changed forever when he came across the music of Jimi Hendrix. He has been inflicted with the blues virus ever since and describes his own style as “Malagassy Blues.” As Tri-Continental, Slim, Lester and Bill create a sound that is based in blues and is greater than the sum of its parts. That sound is further rounded out on this tour by the addition of BC drummer and percussionist Micahael Treadway to the lineup.

Three-time Canadian Folk Music Award nominee Sarah Jane Scouten’s music delivers a signature mix of vintage folk and country with modern sounds and subjects. Sarah Jane is steeped in North American and British folk music from years of finding folk music at its source, from the folklorists of Vancouver Island to the all-night jams in West Virginia and the sacred harp singing in Kentucky – from the culture of song craft in Nashville to the nights of two-step dancing in Louisiana to the time spent reveling in her Glasgow roots. Touring throughout North America and Europe, this seasoned performer boasts a top-notch live show and considerable acclaim for her last three full-length albums. Raised in a musical family on Bowen Island, BC, where harmony singing was as common as watching television, Sarah Jane commits to her roots, using her warbling voice and knack for storytelling to captivate and transport her audiences. Her songs run the emotional gamut, creating a world of characters who come alive in her often haunting, and equally whimsical ballads.

Over a decade since his last solo release, the lead singer/guitarist and songwriter with Canadian folk-roots heroes The Bills has teamed up with some of the country’s most soulful musicians to create an energized, intelligent, soulful, fun and funky new record of his latest original compositions: Two Sides of Canadiana. Featuring an eight-piece band, including a horn section, the new material is indeed separated into two sides of musical pleasure: The Heat (full-blown, good-time roots/soul), and The Chill (folksy, acoustic-based Canadiana). All have a deep focus on themes and topics that Chris sees defining this nation and his place in it. In this case, it’s all about Canada’s (and its southern neighbour’s) somewhat painful growth into the third decade of the 21st century. From his draft-dodging, peace-loving fiddler father to his mother’s family’s three centuries in what is now Quebec, Ontario and B.C., Chris draws upon stories and themes both old and arrestingly current to conjure up a grooving, pulsating and poetic ode to the nation he loves so dearly. This concert will be the debut of Chris’ new music, and the band will be frightfully special, including Miguelito Valdes – who’s toured with Buena Vista Social Club and the Afro Cuban All Stars – on trumpet.