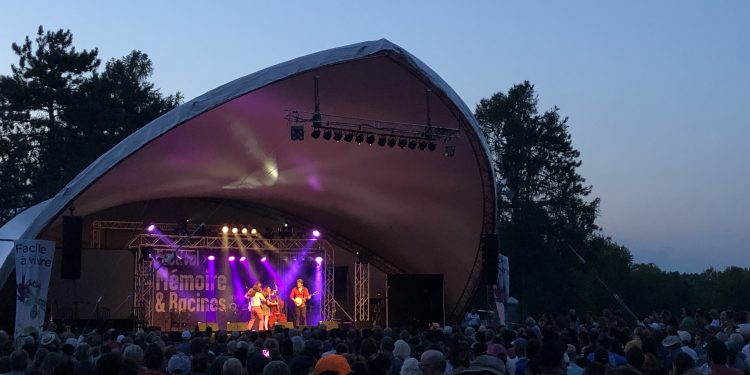 Starting off the daytime workshop stages on Saturday was the duo of Sébastien Dubé and Michel Bordeleau. Born in Québec and now living in Sweden, Sébastien is a world renowned player of five-string acoustic bass. He and Michel are the artists in residence for the City of Joliette for the summer of 2019.

This outstanding duo presented the work of their months of collaboration, including traditional Québecois tunes and original compositions, as well as dramatic storytelling. Their performance was nothing short of extraordinary and was made even more remarkable by their close rapport. 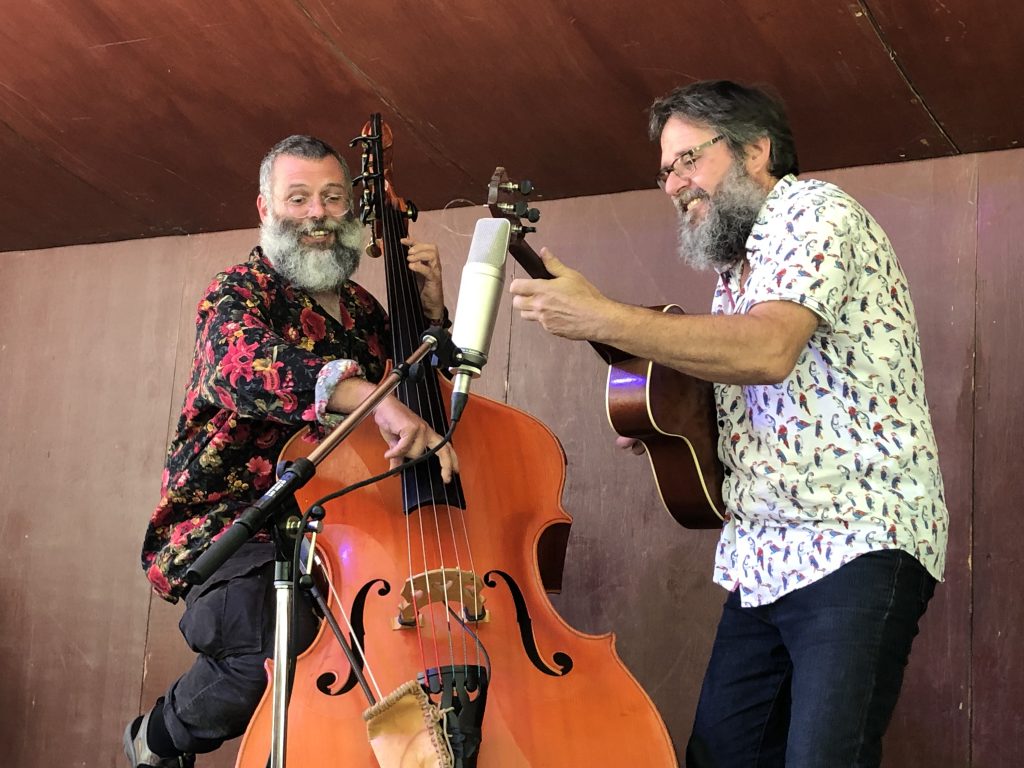 Five accomplished squeezebox players were next up for us. Three (Sabin Jacques, Pierre-Luc Dupuis and Susie Lemay) were players of Québecois button accordion, and two (Mohsen Amini and Gormlaith Maynes) played concertina.

Highlights of this set were the tunes from venerated Québec composers, such as Phillippe Bruneau, Alfred Montmarquette, and Marcel Messervier, but the audience also appreciated the Irish and Scottish concertina tunes. The workshop concluded with a standing ovation after all the musicians found a tune compatible with all their instruments. It’s so fun when squeezeboxes can all play together. 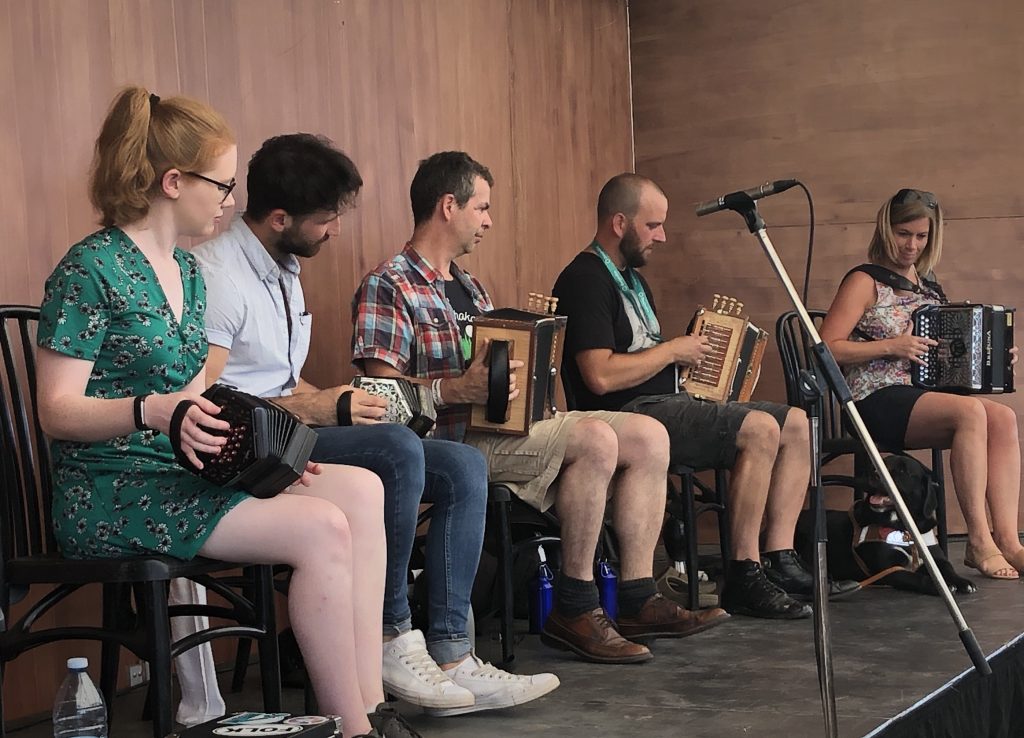 Andrew Collins trio was up next, giving us a superb bluegrass/old time set. Mandolin, bass, guitar and voices were all used to lovely effect with both original and traditional tunes. This set was very easy on the ears. 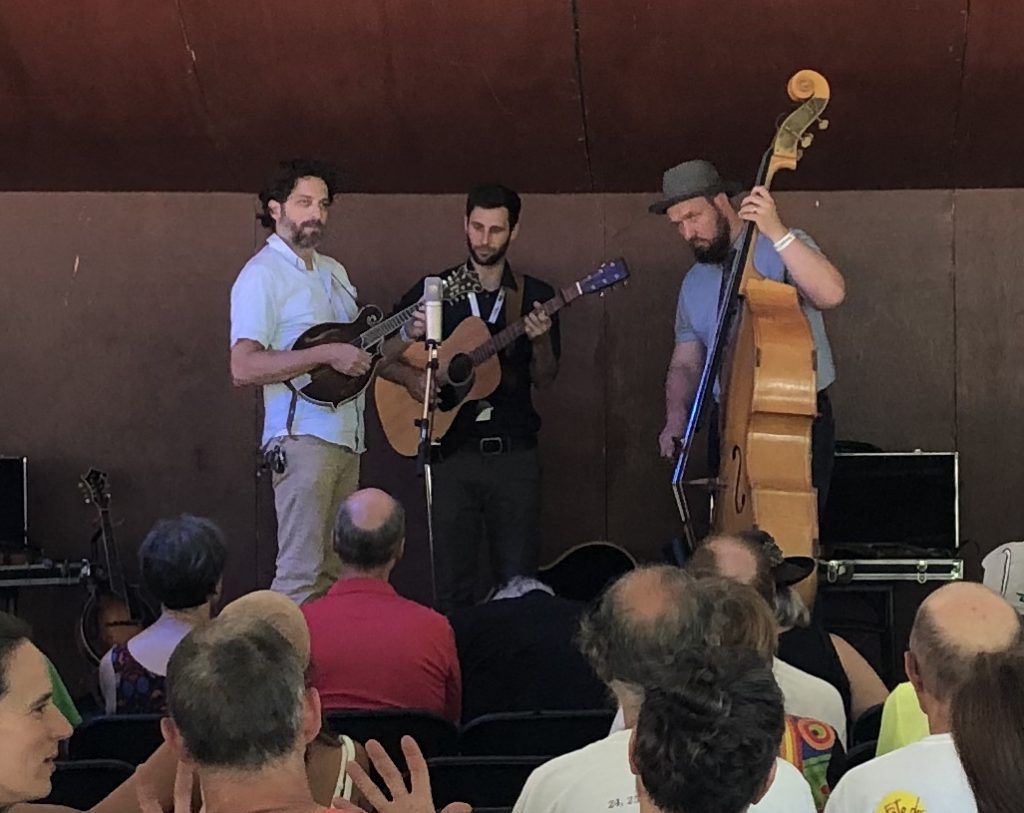 If you like gorgeous voices singing lovely melodies, Les Trois Capitaines will do something lovely for your soul.

Three guitars, three singers (Yves Blais, Paul Marchand and Pat Arsenault) and a lifetime of collecting beautiful French songs made this a beautiful late afternoon set on the acoustic stage by the river in Joliette. 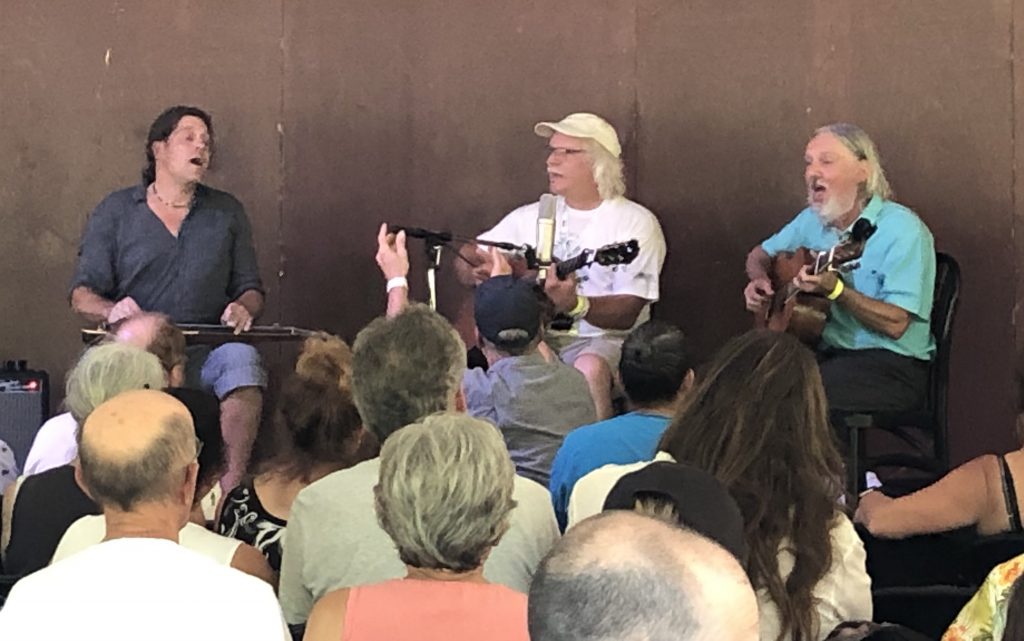 It is of course the 25th anniversary of Festival Mémoire et Racines, so what should be more à propos than to invite musicians who performed at the very first festival. Sadly, many of the older performers are either no longer with us or are too ill to participate this year, but some of those who were still very young 25 years ago have gone on to form the crux of today’s strong Québecois folk music community.

La Galvaud was composed of graduates from the CEGEP traditional music college in Joliette. Eric Beaudry, Stephanie Lepine, Bobby Bordeleau, Michèle Mercure, François Marion and Henri Mondor pleased the crowd immensely. Their reunion today recreated exactly the repertoire of the band as it performed then, and everyone knew the songs and melodies. It is so powerful to be inside an audience that becomes a huge part of the performance.

La Galvaud has been incredibly influential in Québec folk music. Back in the 90s they were virtually the only band issuing recordings of their music. Consequently, it was hugely popular and influenced many other musicians. It was therefore no surprise to find that the audience knew every word of the songs and hung on every note of the music. This reunion certainly was an event of note at this festival. 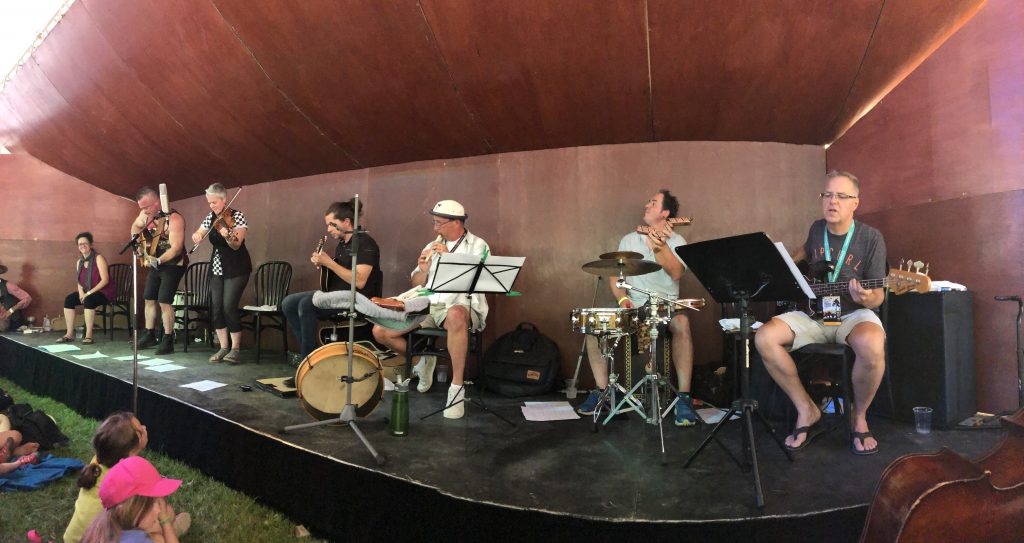 Mémoire et Racines has always been a place where you can experience music from around the world. This year is no exception.

Polky Village Band, from Toronto, gave a stunning mainstage performance of music from Eastern Europe, including Poland and Ukraine.

Fast fiddling, weird musical keys and unusual rhythms made this a very interesting performance. It was visually spectacular as well, with colourful costumes and a dancer with whirling skirts. Very fun. 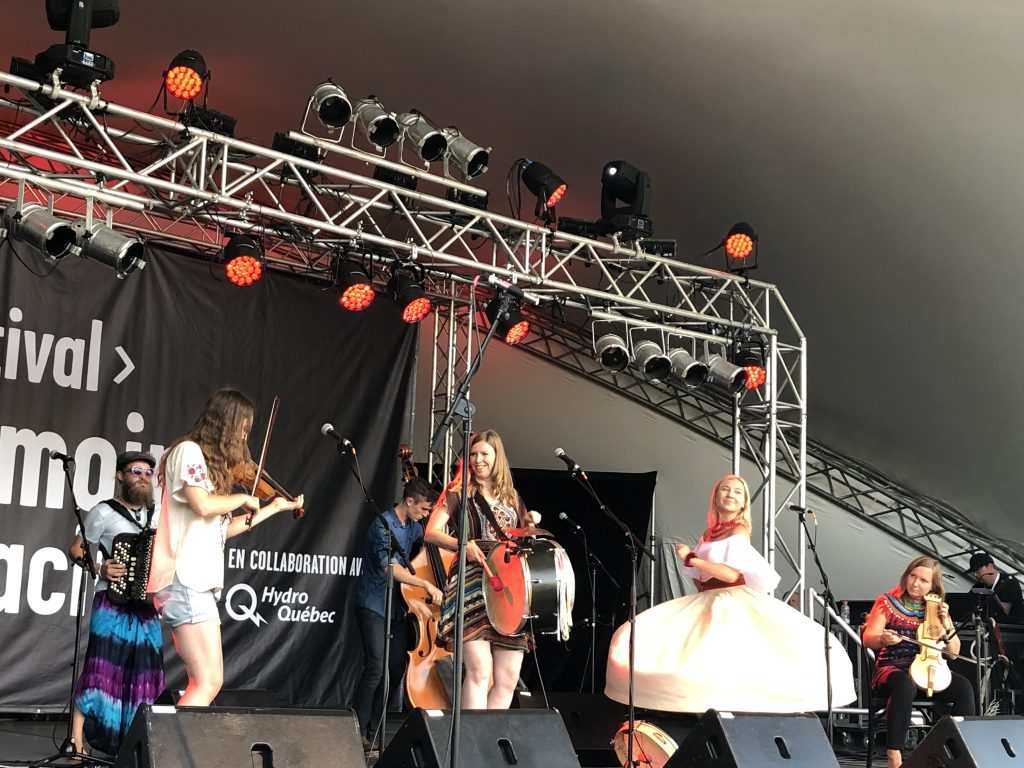 Nicholas Williams with his Village Harmony Chorale popped up in the middle of the audience before the Scène Gilles Cantin mainstage. They sang three songs in four-part harmonies, inviting the audience to join in. It was gorgeous. 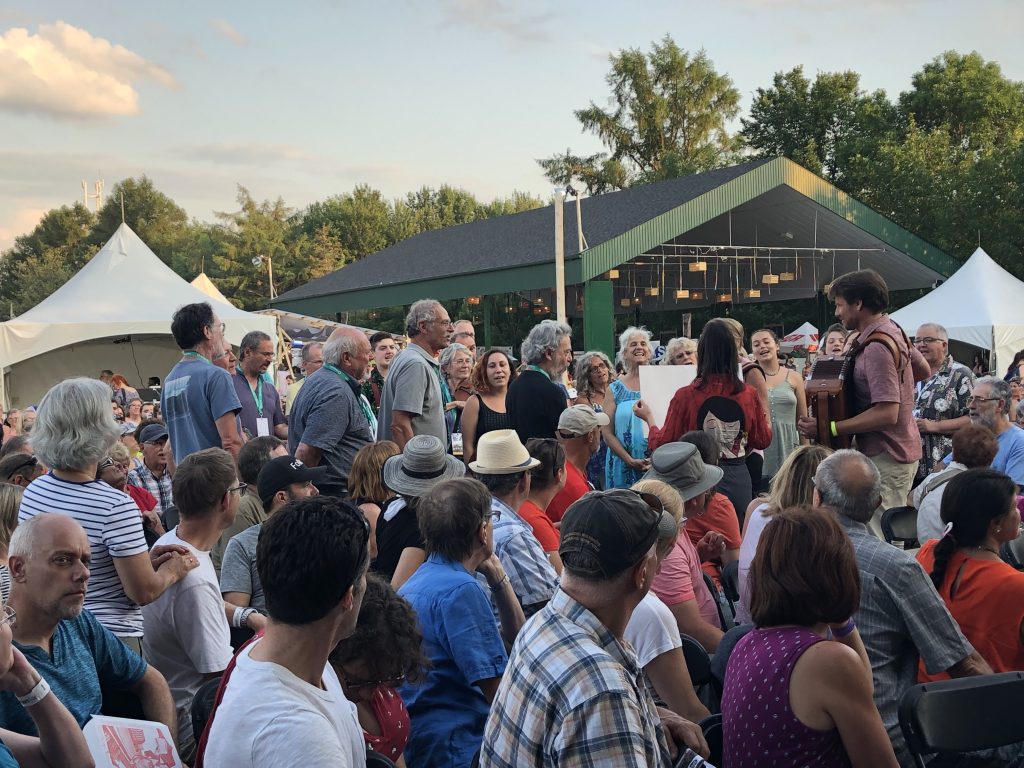 The Saturday evening mainstage continued with the stellar trad band Le Bruit Court dans la Ville. This trio was made up of fiddler par excellence Lisa Ornstein, guitarist and singer André Marchand, with Normand Miron on accordion and voice. It was announced that Normand Miron would not appear with the band because he was having heart surgery, so Sabin Jacques, likely the best accordionist in Québec today, took his place.

The audience was delighted when Elisabeth Moquin, likely the most talented step dancer in Québec today, was invited onstage to step dance. 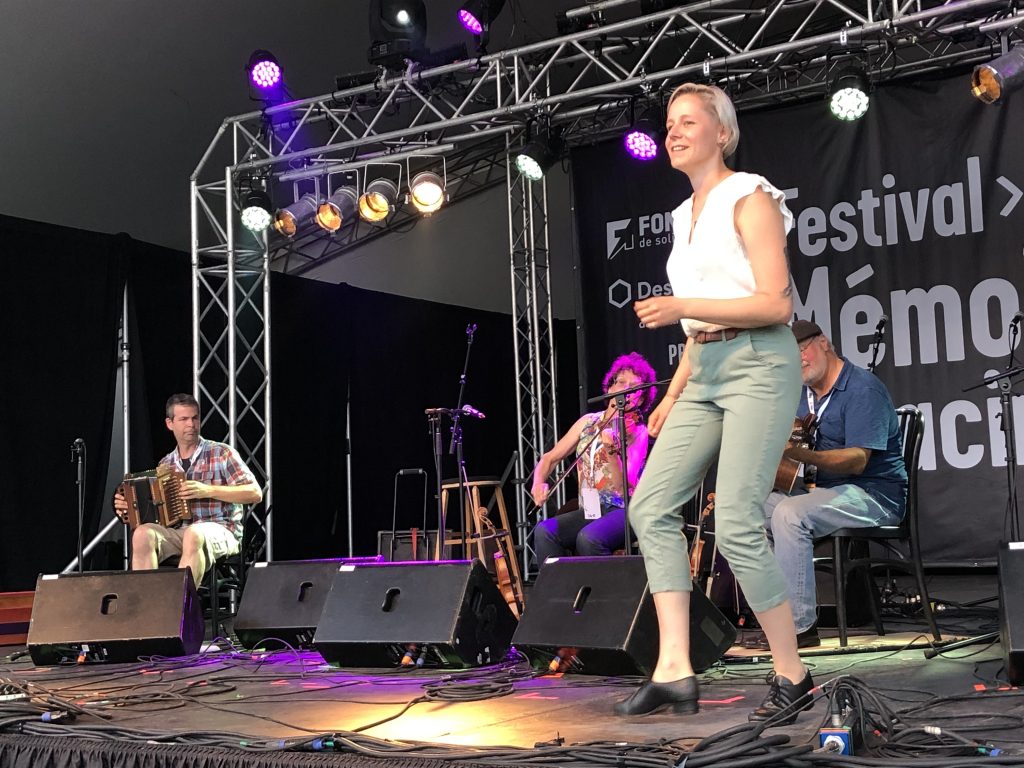 The set continued, and then Lisa announced more invited guests. First were the backup singers: Nicolas Boulerice and Olivier Demers (Le Vent du Nord) with Michel Forest. Then, Michel Bordeleau, first on snare drum, and then on backup vocals. Finally, Normand Miron himself came on stage to a standing ovation.

Normand, just three weeks ago, had major heart surgery. He felt well enough today to join his band-mates to sing several songs and play harmonica. The audience went crazy for this legend of Québecois folklore.

The set finished with Lisa’s lyrical playing of “Les Vagues de St. Laurent” (the waves of the St. Lawrence River), a piece she learned from fiddler Aimé Gagnon of Lotbinière region.

It was a moving and very fitting end to a spectacular set that celebrated the history of this band, one of those that played at the very first festival 25 years ago.

These four young musicians absolutely wowed the crowd with their tight guitar rhythms, great fiddle riffs, solid bass lines, fabulous voices and energetic banjo playing. These three young men and one woman kept us guessing what they’d do next. Sharing one large mic between them, they moved among and between each other, instruments in hand, seeking the right distance from the mic. They were nothing short of spellbinding. 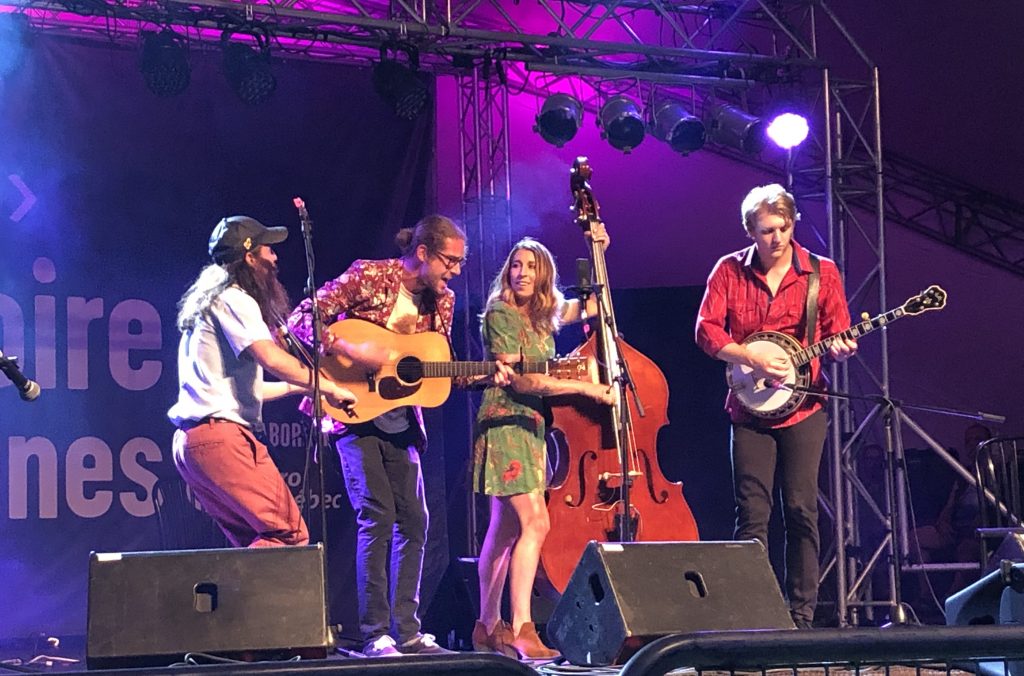 Nicolas, on fiddle and both hand and foot percussion, drove the bus as hard as you can imagine, ably supported by Stéphane Tellier on guitars and mandolin and Simon Lepage on electric bass. 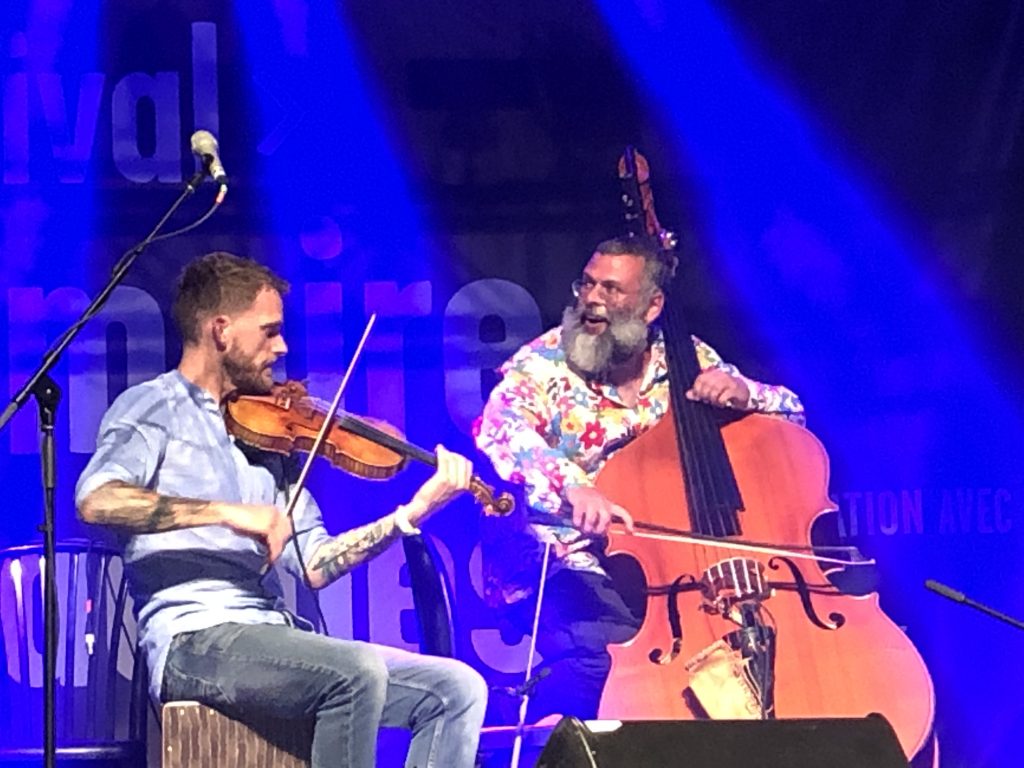 This is folk music for the next generation for sure. Everyone under 30 was on their feet dancing up a storm as this band drove trad music across the divide into the pop genre.

Just when you thought you’d seen the band at its best, they brought on stage the superb contrabassist Sébastien Dubé to join their next set. If there had been a roof over Parc Jean Bosco, it would have vanished in the wind created by the energy.

And so concluded Saturday night at Festival Mémoire et Racines – except for the square dancing in the dance hall, and the midnight jam sessions that were starting up all over the park. 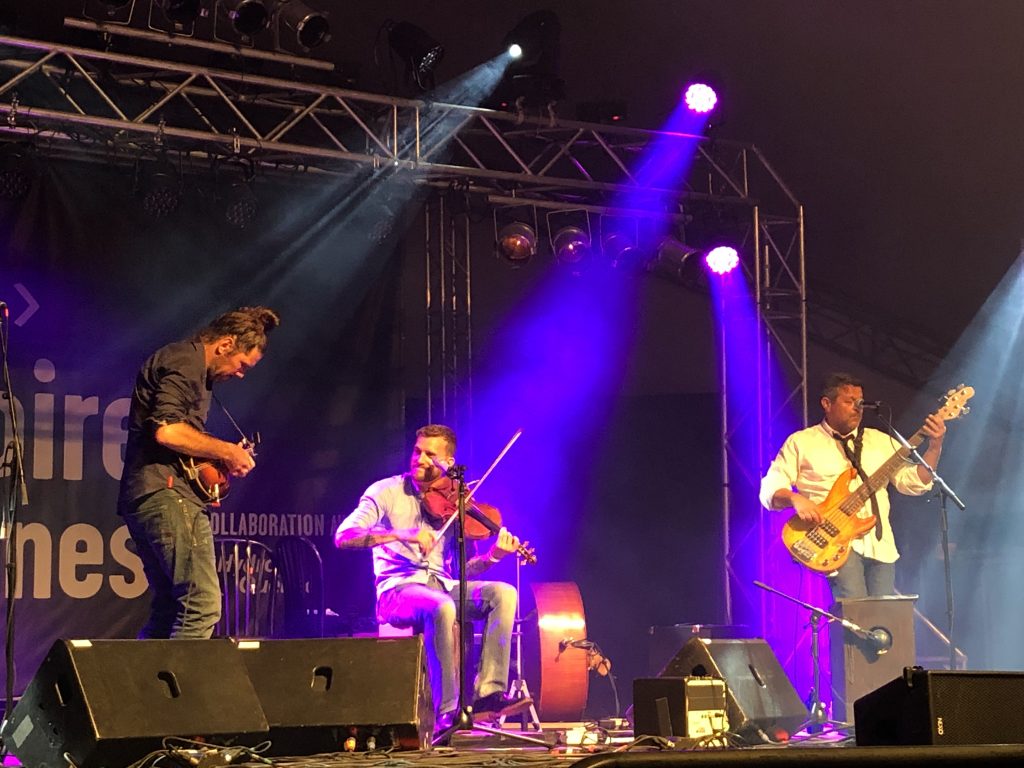 Friday night on the National Stage at ...