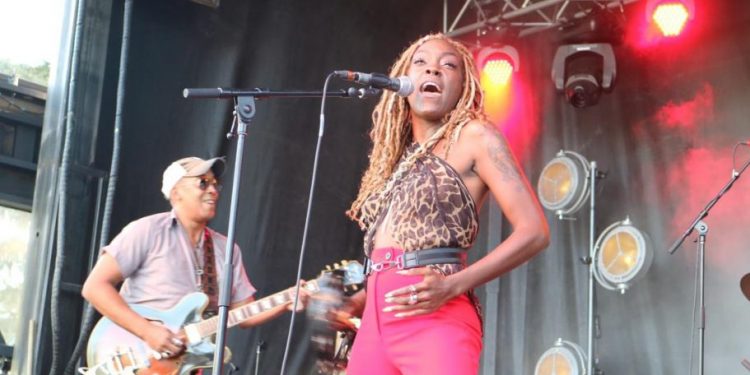 Day two of the Calgary Folk Music Festival offered an eclectic line-up at the National Twilight Stage. Did we expect anything less? Despite the differences in genres, each act was similar in their ability to amaze the audience with the gold standard of musicality that Folk Fest is known to provide.

First to grace the evening’s spotlight was Combo Chimbita. Carolina Oliveros described their sound best when she took to the mic and said, “This is tropical futurism. What’s that? I don’t know. But I know one thing: It’s pure love, pure energy, and good vibes for you.”

Although Combo Chimbita uses Spanish to tell their stories, the language barrier did not deter the audience. Sensual rhythms, guitar riffs, and movements kept us engaged and hanging on for more. The group was immensely playful, clearly feeding off of the energy produced from each other and blasting it all right back to the audience. This was an experience meant to fuel and energize the souls of all those participating, whether you were a member of Combo Chimbita or a listener. 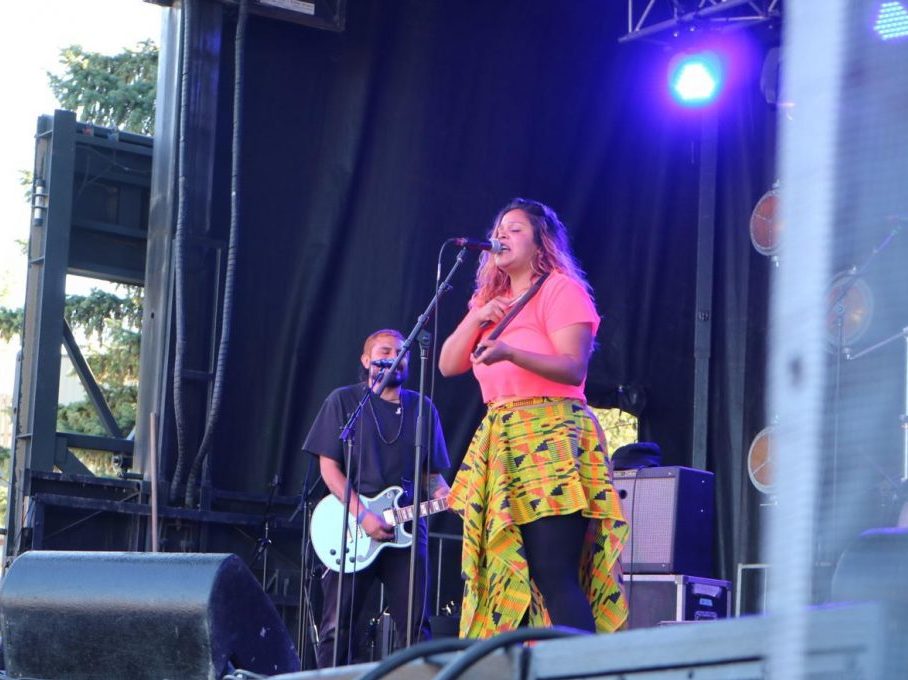 Oliveros’ vocals are transcendent, as she switches between soft, smooth tones to powerful vibrato all in the same breath. She has an operatic voice that lures the audience in, urging them to get out of their arm chairs and sway their hips to the ever-playful beat. By the end of the set, it was hard to resist.

“This is my home, this is my place, and this is a language,” Oliveros declared.

By the end of the performance, it was a language we were all fluent in.

After Combo Chimbita belted out their last note, the group said goodbye, and then it was time for Revel in Dimes.

Now this group was soulful. The band started teasing their first few notes, when out strolled lead singer Kia Warren. Barefoot and vibing with her tambourine in hand, Warren’s dancing was a crucial component of her performance. However, the passion in her voice is her calling card. Warren manages to land on top of every note, no matter how high. Her vocal range and control is masterful, as she ties together all the talented elements that are at play on-stage. 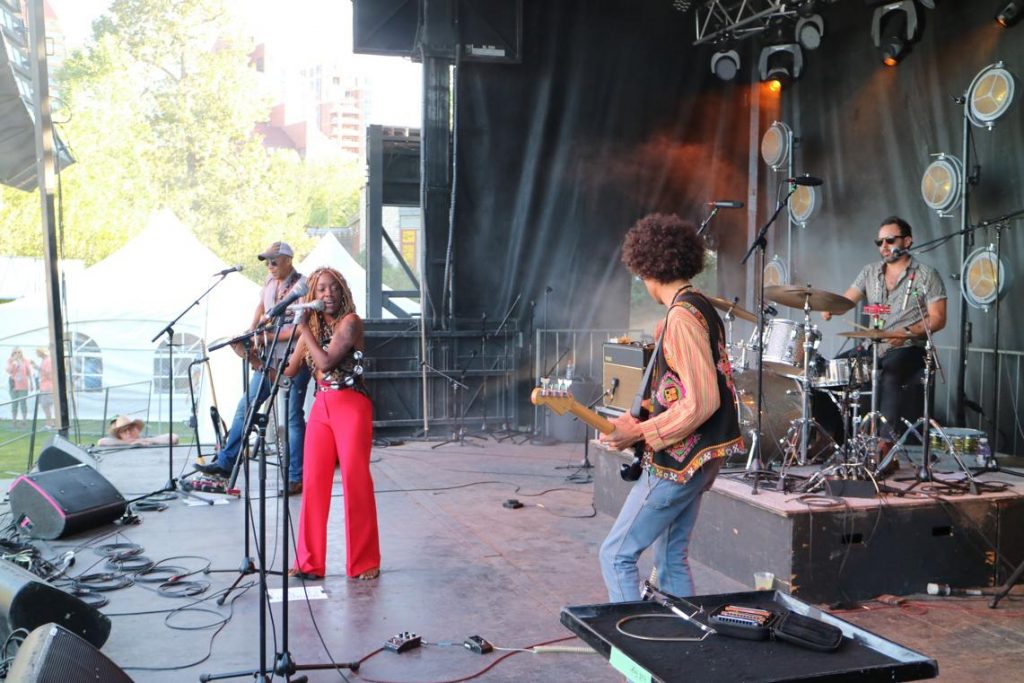 Revel in Dimes has style, as any good blues band does. Yet, their ever-authentic charisma and attitude takes them one step further. Each member takes turns commanding attention, and they encourage each other to do so. Eric Simons on guitar has the cool-factor on lock, and when he steps into the limelight, he is too fun to ignore. Washington Duke sets the tone on drums, and despite being limited to the back of the stage, his suave presence is embodied everywhere you turn. Chris Waller on bass and harmonica is right there with the audience, taunting, provoking, and moving people to let loose and fall into each song.

Revel in Dimes managed to tease the end of a song, and it was anyone’s guess to when those final notes would break way. But then, in the span of a singular breath, a new melody would pick back up again, always enticing and flavorful. By the end of the set, half the crowd was on its feet. The band’s time on stage, although seemingly fleeting, was incredibly impactful.

It was fitting that the final act of the evening at the National Stage was Canada’s very own DJ Champion. With the help of haunting guitar riffs and pristine vocal clarity from his band, DJ Champion managed to get everyone on their feet for his set. 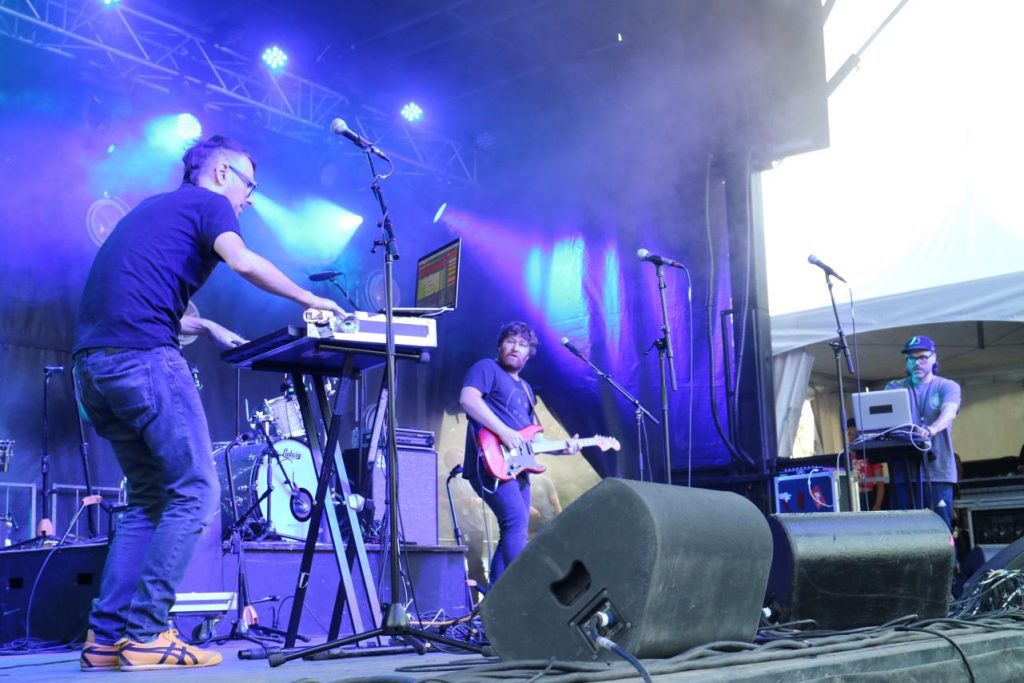 The songs were inviting and created an atmosphere where everyone felt as though they were meant to be there. The National Stage turned into a house party of sorts – but it wasn’t meant to celebrate the “cool kids.” Here, it was expected that you came as you were, so long as you wanted to get lost in the beat.

A simple looping of the downbeat gave the guitarists and vocalists room for creative freedom, and they thrived. The improvisations were as calculated as they could be with seamless transitioning between songs. DJ Champion managed to play with the mood of the night, as he balanced between soothing, pulsing rhythm and downright explosiveness. It was the link between the two sounds, the build-up, that had people on the edge of their seats.

All in all, the National Stage provided something for everyone Friday night. The rest of the weekend is set to accomplish the same. 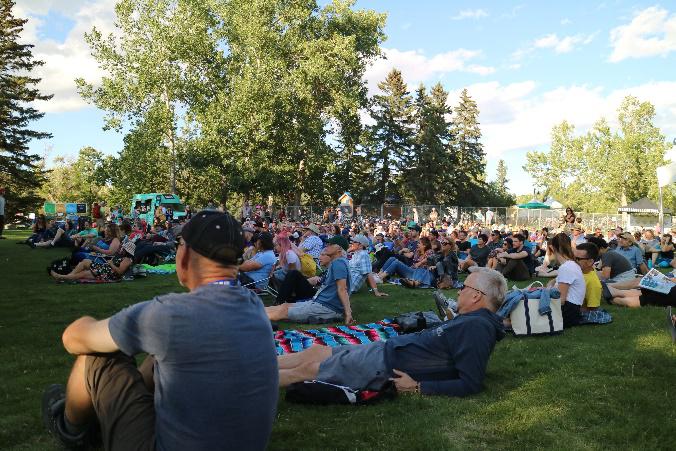