Dispatches from the Stan Rogers Folk Festival – Day One (Friday) 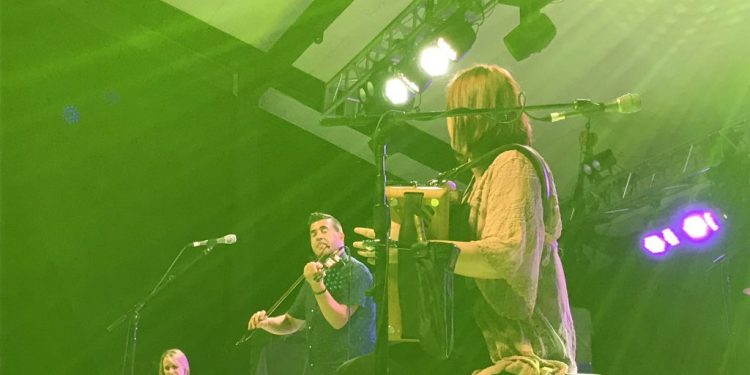 Driving out to the Stan Rogers Folk Festival in Canso, NS, it’s hard not to notice the contrast between summery green grass and splashes of the booming blue ocean. Hills, forests and wildlife guide the way until the music at StanFest takes you over. It makes sense that a major theme at the festival this year is lowering the environmental footprint. In a town as beautiful as this one, lowering waste is a popular priority. Organizers are encouraging this is by asking people to return lanyards to the box office at the end of the festival to re-use in 2020, distributing paper straws near the food trucks, and re-using wristbands left over from 2012.

We made it to the festival on Friday night just in time to catch Vishtén, an Acadian folk band based in Prince Edward Island. They began with an instrumental track, breaking any language barriers between their French lyricism and the majority English speaking crowd. Moving on with “Elle Tempete,” the band engaged with the audience by sharing an origin story about the song, and we listened to the three-part harmonies that are Vishén. Their music is non-linear, creating the perfect balance between funk and folk. It was incredible and jaw dropping. It was their first time preforming at StanFest in 10 years, and did they ever bring 10 years worth of energy here with them.

I can’t wait ’til tomorrow!

Three highlights from Day One of the ...