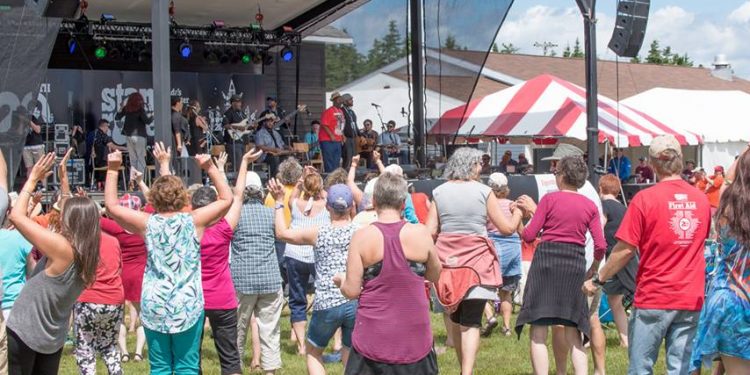 With a mainstage that includes Jeremy Dutcher, Donovan Woods, Suzanne Vega and Dave Gunning, this year’s Stan Rogers Folk Festival has so many top-tier performers on its bill that you could be forgiven for entirely overlooking the up-and-comers. But that, my friends, would be a terrible mistake, for there are some lovely little gems in this lineup that you won’t want to miss if you’re heading out to Stanfest in Canso, NS this weekend.

Here are but four:

It turns out that not every musician who grows up on Cape Breton Island dreams of becoming the next Natalie MacMaster or Jimmy Rankin. Matt Ellis, Travis Ellis, Jon Pearo and Archie Rankin made tracks for Halifax as young adults, chasing after the indie rock success of acts like Sloan and Joel Plaskett. Their pop band Mardeen released several albums and EPs, had a song covered by Mo Kenney, and got to tour with the esteemed indie rock group Alvvays, but success of the Sloan/Plaskett variety evaded them. Then, a few years back, a spontenous sing-a-long of old Rankin Family songs got the guys thinking about the music of home, and they were inspired to launch a new project incorporating traditional East Coast influences. Villages is proof that you don’t need to have been playing Cape Breton reels at two years old to be able to produce a compelling Cape Breton-influenced record. This is really nice stuff.

It takes a lot for a young neo traditional band to stand out in the motherlands of Celtic music. So if, say, a Scottish act is generating a buzz on the international circuit, chances are, they’re going to blow your brains out with their combination of energy, originality, and absolutely flawless playing. Talisk continues in the proud tradition of acts like Shooglenifty and Ireland’s Kila in doing just that. Over the past five years, they’ve racked up several major awards, including both the 2018 Belhaven Bursary for Innovation and the 2017 Folk Band of the Year award at the BBC Alba Scots Trad Music Awards, and a BBC Radio 2 Folk Award. They’ve already appeared at the Cambridge Folk Festival, Denmark’s Tønder Festival, WOMAD UK, the Philadelphia Folk Festival, Celtic Colours, the Milwaukee Irish Festival and Glasgow’s Celtic Connections, and they have amassed a die-hard following. This appearance at Stanfest is going to be one heck of a treat.

She isn’t that well known outside of the Maritimes, but Reeny Smith’s list of achievements in her home territory is a long one, let me tell you. She won this year’s East Coast Music Award for R&B/Soul Recording of the Year, along with the Bucky Adams Memorial Award. She was a gold winner last year and the year before in the Coast’s Best of Halifax rankings. She’s won four Music Nova Scotia awards for African Nova Scotian Artist of the Year, and she’s been a Top 10 finalist in CBC’s Searchlight competition, which, as you probably know, is decided by popular vote – meaning it’s not just critics who think Reeny is petty awesome; she has a solid base of devoted fans too. If you’re travelling to Nova Scotia for Stanfest this year, expect to find yourself joining that fanbase.

It feels cliché to say, but I can’t help hearing shades of Joni Mitchell in the voice of Toronto’s Tamara Lindeman, who makes her Stanfest debut this year – perhaps also a little Margo Timmins and Cowboy Junkies in the beguiling understatedness of her approach. Many descriptors come to mind when listening to her latest, self-titled album: intimate, introspective, wistful, nostalgic, arty, ethereal, and maybe even a little 80s alternative.  It’s also got a unique vibe that’s at once timeless and contemporary.  It all adds up to something I could totally imagine myself listening to under a hazy sunny sky at a summer festival – particularly when you factor in Tamara’s incisive, evocative lyrics that touch on feminist themes, such as on the number below.  What’s more folk fest than great songwriting served with a helping of social justice?

Three unique acts to catch at the ...