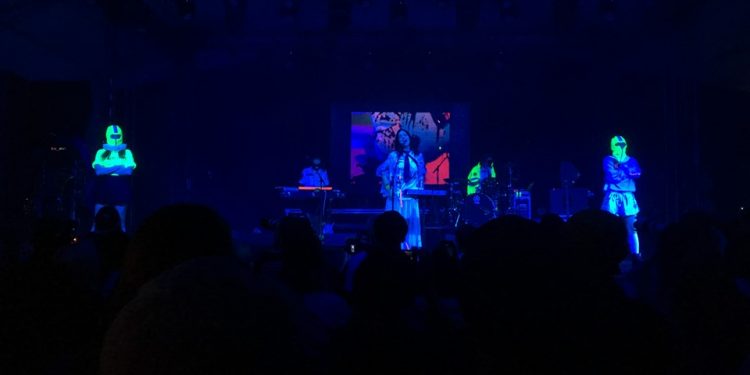 The final Bluesfest weekend saw Somalian born artist K’naan take to the City Stage early evening, and it was a chaotic start; his mic was not functioning, then it was, then it wasn’t.  K’naan’s show benefits heavily from his song introductions and a clear expression of his lyrics, but K’naan, no stranger to adversity, was not phased by the technical glitches and was quick to get back into a groove.

Within the first few songs, he was teaching us his song “This is Africa.” 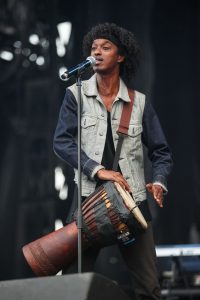 K’naan has a new album coming out in the fall called Disgraceland, so he walked us through a few of those tunes. It looks like it’s going to be a good one with some nice melodies mixed with K’naan’s thoughtful messages.

Many of his songs, have an element of audience inclusion, and, while K’naan is a thoughtful, serious artist, the delivery of his songs is playful and engaging.

K’naan is comfortable in front of an audience and is able to draw us in to his world.  Whether describing how one of his songs was born out of a relationship he couldn’t bear to see end or his experience songwriting with Adam Levine for Bruno Mars, you’re engaged before he even launches into the song.

He unfortunately was interrupted by a person in the crowd and then the festival staff regarding a concern over lightning. He had just begun to speak of a friend of his who was living in Toronto, the Somali journalist Hodan Nalayeh, who was killed in Somalia the day before.  His sudden departure from the stage due to the lightening threat was an abrupt end to a show that was otherwise interesting, engaging and entertaining.

During the lightning break, we were entertained indoors by Ikirezi, a Rwandan born local artist in the Barney Danson theatre.  While Ikirezi primarily performed covers of Bob Marley, Aretha Franklin and Beyoncé, her voice was truly something to behold.  Her band were extremely talented, and she did perform a song in her native Rwandan tongue.  She received a standing ovation at the end of her set and was clearly overwhelmed by the attention and accolades. It was a truly beautiful moment seeing this artist reach a new peak.

Wu Tang Clan did make it on the stage finally at around 8:45 p.m.  While I am not well acquainted with Wu Tang’s music, I caught a few songs with some new pals I made on site then had to move on.

People arrived early at the Bluesville stage for Pussy Riot. If you’re not familiar with Pussy Riot they are a Russian feminist art collective.  You may remember their trial a few years back from media images of these Russian women, one of them pregnant, in cages in court. They were charged with hooliganism for playing music unannounced in the Moscow Cathedral of Christ the Saviour and sentenced to two years in a penal colony. 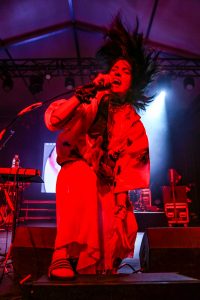 Nadezhda Tolkonnikova down with the crowd, Photo by Greg Koltz.

What struck me when I was first introduced to Pussy Riot was the idea of a band as a collective – a band with rotating members, 11 at that time, their identities hidden, expressing a shared ideology centred around women’s rights, respect for the environment, and checks and balances on government.

Pussy Riot has developed both a spirit and a sound.  The show was dynamic and visually striking. Between the videos running behind the band and the visual of frontperson Nadezhda Tolkonnikova flanked by two balaclava bearing dancers, the Riot had our attention.

As Pussy Riot progressed through their set, their message unfurled like a ripped up letter you find and slowly piece together.

They are ardent environmentalists, although I did see bottled water on stage. Tsk tsk.

They do not pull any punches. Their message is in your face, with at times disturbing images. It is, though, thoughtfully presented and, in a day and age where the images and sometimes the existence of war and environmental disasters are withheld from us by our governments and the media, perhaps this dose of reality is important to our becoming further “woke” to the real world around us.

You may wonder what a review of Pussy Riot is doing on a folk roots web site.  I see the idea of a collective and resistance through music as part of our DNA in the folk world.  As a matter of fact, a folk artist myself, I covered one of Pussy Riot’s songs, “Punk Prayer” on my most recent album “Bridging Borders.”

Pussy Riot concluded its set with the crowd dying for more, chanting their name until the lights were turned on.

I caught the end of Matt Andersen’s show, and it was powerful.  He had a full horn section and a kick ass guitarist joining him.

Snoop Dog had the last word on this night with “You’re young, You’re wild, You’re free.”

The final night of Bluesfest was absolutely packed for the Backstreet Boys who, while entertaining, we’re not served well by the low volume they were presented at. 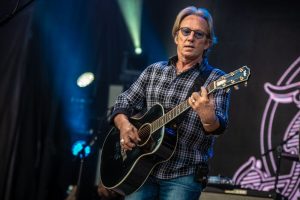 But I was there for America.  America, this night, did not disappoint. People packed the hill overlooking the Bluesfest Videotron Stage on a perfect summer night for what was a spectacular show.

They opened with “Tin Man” from Holiday and then rolled into a later hit of theirs, “You Can Do Magic.”  The sound was pristine, and their new line-up was a perfect compliment to original members Dewey Bunnell and Gerry Beckley.

Dewey and Gerry have continued to perform together since their final album, Harbour, recorded with the third founding member, Dan Peek, came out in 1977.

That last album was produced by the infamous George Martin. As a tribute to George, they launched into the Beatles’ “Lonely People.”

They performed many of their hits including “I Need You,” “Ventura Highway,” and “Daisy Jane.”

They went on to recount the history of the band and their experience as Americans attending high school in London, getting to see Led Zeppelin, Jimi Hendrix and the Experience, and how, soon after, at 17 years of age, they opened for Pink Floyd, saying that “fans went mild!!”   Dewey and Gerry’s self deprecating, humble banter was very entertaining and informative of their history. 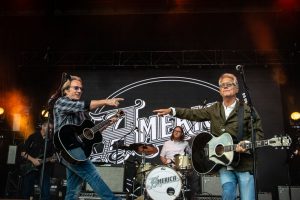 America’s Dewey and Gerry pointing each other out. Photo by Sean Sisk.

As a reflection on those days, another cover was added to the set that got everyone singing: “All the leaves are brown, and the sky is grey …”

Yes, it was the Mamas and the Papas’ “California Dreaming.”

As previously mentioned, the supporting members were excellent; Steve Felete’s guitar playing was killer. Iowa drummer Ryland Steen skillfully guided the pace of these great arrangements. And Rich Campbell held it all down on bass and backup vocals. And the videos presented behind the band were awesome.

The band closed with crowd favourites “Horse with No Name,” “Sister Golden Hair” and an extraordinary performance of “Sandman,” along with dramatic video depicting scenes from the Vietnam War.

For me, having learned and played so many of these songs over the years, to hear these folk classics performed so marvelously was just the perfect end to the 25th installation of Ottawa’s Bluesfest – an event that has become an institution in this city.

Until next time… “Laaaaalaa la a lalala lala la laaala… horse with no name.”

Behind the sounds at the Calgary Folk ...

Four up-and-coming acts to check out at ...