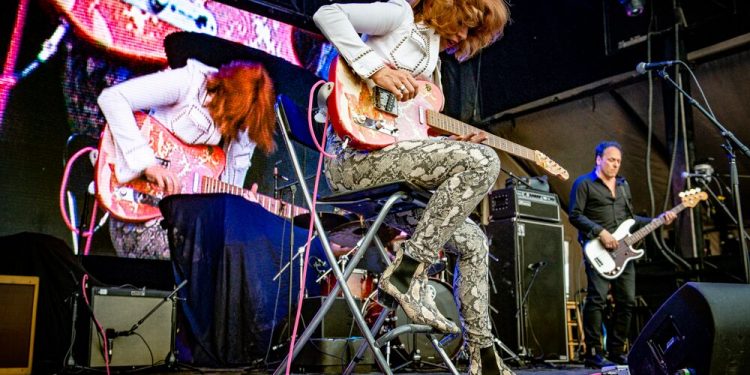 Bluesfest “Don’t like Mondays,” so after taking that day off, Bluesfest was back Tuesday night. Lennon Stella, who some will know from the show Nashville – as the older of the darling daughters of the show’s star, Rayna James – was mainstage Tuesday night. That folk charm – playing acoustic in her room, harmonizing with her sister – that she exhibits on the show is not a part of her new Pop persona.

Lennon has a special voice, and is making a splash, she is still young, and perhaps at this point still acting the part. I expect to see this talented young artist in the future, more comfortable on stage and connecting more with her audience. It is clear Lennon’s future is bright. She is already a star on TV. She can be a star of the stage.

The band Bearings, in the tradition of the Dirty Nil or Green Day, were really giving it all they had out there on that stage. It was great to see!  This band has the pieces in place.  They just need to keep doing what they are doing: writing, recording, performing. 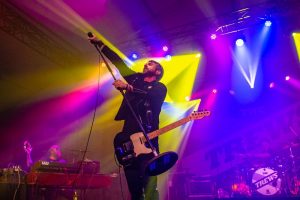 Canada’s own The Trews turned up the heat on the Bluesville stage in an already hot, packed tent.  These four Canadian rockers churned out one crowd-pleaser after another, bringing the audience to a frenzy. This performance left no doubt that the Trews are one kick-ass, Canadian rock band.

Ottawa blues legend Sue Foley returned home with a vengeance.  Her set had started when I arrived, and she sat, confidently poised, on a stool, classical guitar in hand playing the blues in impeccable, crisp flamenco style.  Sue seems to always come with something special, something new. These blues songs she performed with her band, on the classical guitar, were stunning to listen to.

And then she was quickly back chugging that beautiful pink paisley telecaster.  Elegant in her snakeskin sequinned pants and boots, Sue entertained us with some blues standards and songs from her new album, Ice Queen, playing the hell outta that Fender.  She was backed by a wonderful band: Toronto-based Leo Valvasori on bass, Tom Bona on drums and and San Antonio’s Al Gomez on trumpet, who’s playing, beautifully complemented Sue’s style. 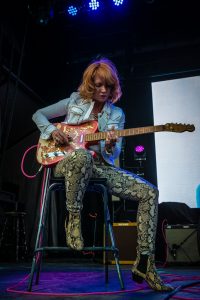 Sue shared with us that she is working on a project documenting the history of women guitar players.  Keep an eye out for that.

Sue Foley’s set was as always, entertaining and memorable.

Buddy Guy came ready. If you’ve ever seen him perform, it seems he was born ready, and he was not kidding around on this night. He was here to play.

Buddy, as always, used all at his disposal to perform.  He was playing with one hand and addressing the audience with the other. At one point, he was playing the guitar with his shirt.  Buddy’s energy and unique approach are to me what has made Buddy Guy stand out. 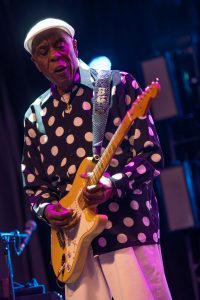 Buddy also came with a message. “I love you,” he told us all a few times over the evening. “I love you.” At one point in the evening he had the band bring it down low, and he told us all that, back in 1967 when he came to Canada, it was that experience coming here that gave him confidence. When he left, he truly believed in himself.

Buddy also made it clear he has kept playing over these years to carry the torch, to ensure he kept the blues alive in honour of his contemporaries.  He opened with a Junior Wells number. He played John Lee Hooker. He played Muddy Waters. Part of his show was an education.

But Buddy Guy ain’t shy, and the language isn’t the kind you’ll hear from your teachers in school. Let’s just say, no one will accuse Buddy of not keeping it real. At one point, he told the audience, in a nice way, he “did not come all this way to have us f*%k this song up. Try that again … that’s better. That’s better!”

To close out the show, he invited Sue Foley back to the stage.  It is in this context that we got a taste of how Sue Foley has navigated her way with class and grace in this male-dominated industry.  With a backdrop of fireworks from the Kygo stage, Sue stood toe to toe trading licks with Buddy, gracefully sidestepping his lyrical flirtations and, with class, bowing out with his band to put to bed an incredible evening of music.

It was grand to experience Buddy Guy perform once again, this giant in the house of blues, still at the top of his game, bringing back the blues to Ottawa’s Bluesfest.