The Vancouver Island MusicFest, July 12-14 at the Comox Valley Fairground 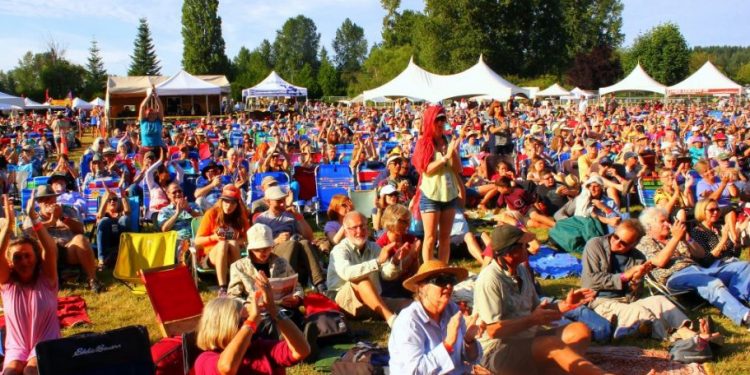 Roots Music Canada is stoked once again this year to be partnering with Keith and Heather Nicol and their travel blog. This recap of the Vancouver Island Music Fest is an abridged version of three separate days of daily reviews published on their site.  You can see the full, original write-ups – and more photos! – at http://keithnicol.blogspot.com.  Thanks for sharing this with us, guys!

Friday, July 12 offered a perfect night for enjoying a wide range of music at the Vancouver Island MusicFest. My brother and his wife from Victoria joined us again this year, and by the time they arrived and we had a quick bite to eat, we were just in time to see Irish Mythen, who puts on a great show. We saw her last year and she came back by popular demand. Irish is a powerful singer, and it is hard to believe that her single voice filled the main concert bowl.

She was followed by a welcoming dance and songs from the local First Nations Kumugwe Dancers, and then another band that has been to MusicFest  before took to the stage. Los Texmaniacs and the Lone Star Amigos from Texas had a variety of performers on stage, and we really enjoyed their upbeat show. It had tons of variety, and they had many people up dancing to their Tex-Mex beat. They were followed by blues legend Bobby Rush and then rocker Colin James finished the evening. 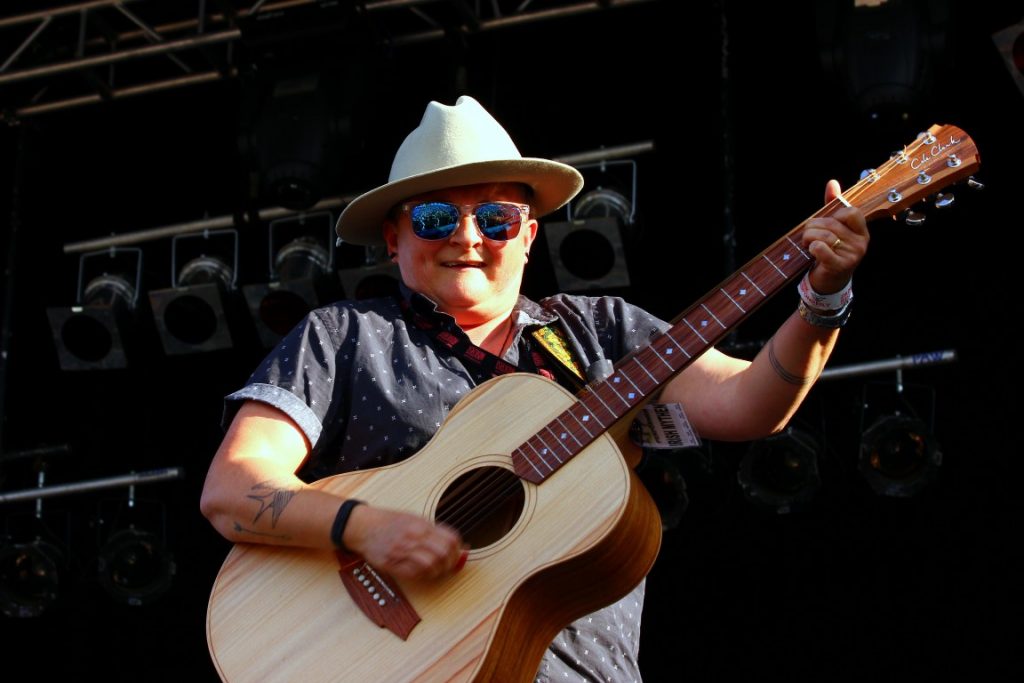 On Saturday, July 13, we spent a good part of the day at the Grierson Stage, since it had some great musicians paying tribute to some important anniversaries. It began at 10 a.m. with Happy Birthday Pete Seeger – 100 Years, and it was one of our favourite sessions of the day. We loved Helen Austin’s version of Joni Mitchell’s “Both Sides Now.” Next up at 11:45 was Planet Music, which featured, as the name suggests, music from around the world. Both Cha Wa and Adonis Puentes had people up dancing in the aisles with their lively rhythms.

We disappeared for a short time during the Planet Music session to check out a new venue and theme for this year at The Club. This venue is adjacent to the main concert area in the curling centre and featured hands-on sessions. For instance, we had a quick lesson in how to dance the tango with Keith Beldam and Yumiko. Then it was back to the Grierson Stage, where we saw another tribute – this time to Woodstock, which is 50 years old this year. When the MC asked if anyone in the audience was actually at Woodstock, a few people raised their hands. Next we caught one of our favourite Newfoundland musicians, Matthew Byrne, on the Woodland Stage. We had seen him in Newfoundland on a few occasions with an amazing group called The Dardenelles. Come to think of it, they would be a perfect addition to the line-up at a future MusicFest. Then it was back to the Grierson Stage to catch the end of another tribute – this time entitled Roots of Rock and Roll.” The fun side to these tributes is that each of the several groups on stage gets to choose how they were influenced by the person or event being recognized. 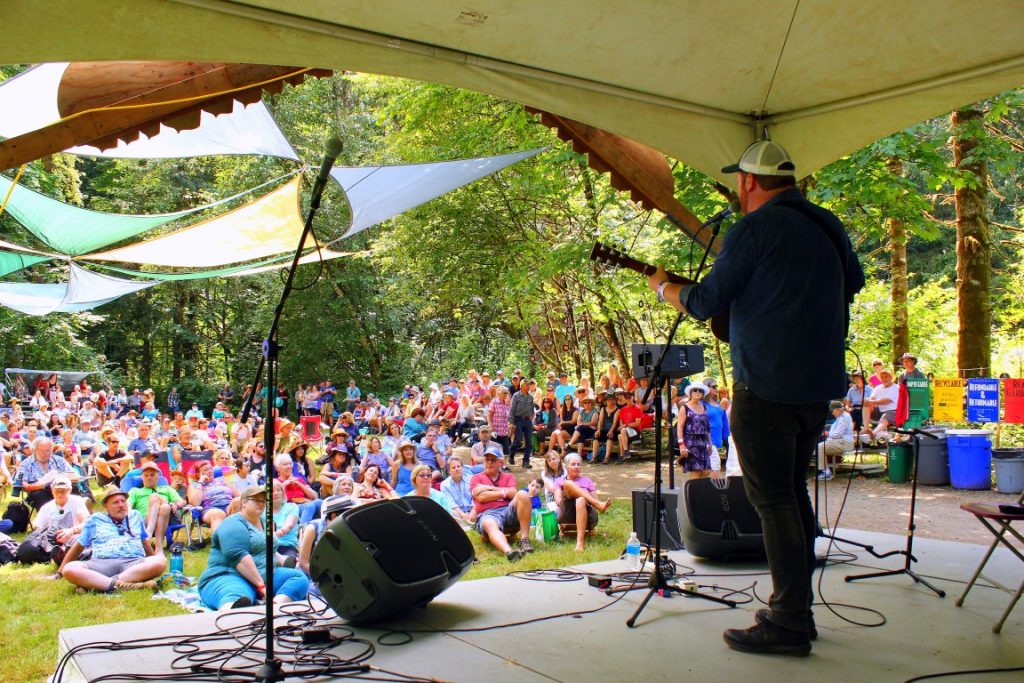 In the evening, we headed to the main concert bowl, where we heard Cha Wa, Muscles Shoals AllStars, and Tom Cochrane. Who knew so many top soul singers were associated with Muscle Shoals? And Tom Cochrane put on an energetic standing-room-only performance. Rain played havoc with the evening shows, and it unfortunately shortened the evening for many people

With the men’s tennis finals at Wimbledon playing the Sunday morning we had a decision to make: watch tennis or head to MusicFest. Our group opted for the tennis, since it looked like Federer was on his way to another victory. But then Djokovic stormed back and forced a tie-breaker at 12 games each in the final set. The tennis went on longer than we thought – Djokovic pulled out a victory at the last minute – so that meant we missed some of the opening music. We arrived at 11:30 and headed again for the Grierson Stage (one of our favourites), where we caught a session titled Rhythms. This also allowed us to see the First Nations group Asani, which we had missed the day before but had heard were amazing. They were certainly a highlight of the morning, and we loved their version of “Oh Canada.”

Next up at the Grierson at 1:30 was a session called Whoa Guitar! It featured some of the festival’s top guitar players all under one roof. As each of the performers selected the song they planned to play, the rest of the group picked up the chords, which often rocked the stage. Headliner Colin James got the award for getting the most people up and dancing in the aisles. 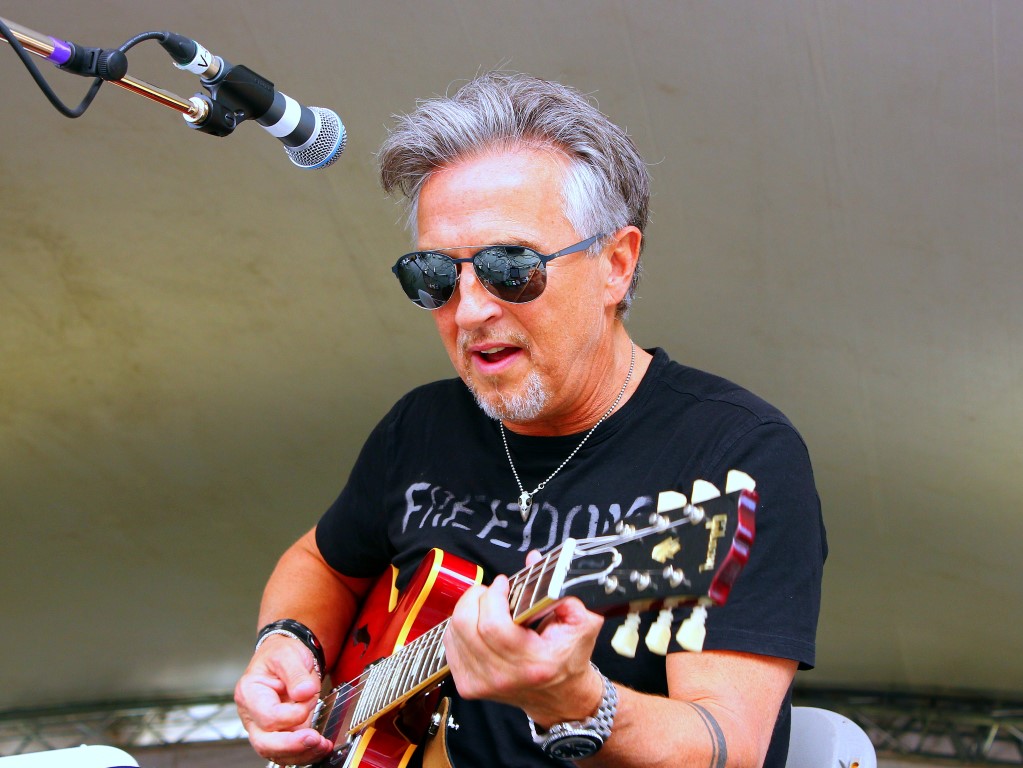 Then we decided to check out something completely different and headed to the Barn to see The Moaning Yoni, which is a one-woman show by Joylyn Secunda. The show has a warning: viewer discretion is advised, since it deals with a college student named Zoe who has a sexual awakening. Joylyn had the audience laughing throughout, and we especially liked her depiction of the various ways men kiss.

In the evening on the mainstage, we caught Danny Kortchmar with Waddy Wachtel and friends. Turns out these guys wrote music and performed with many top performers like James Taylor and Linda Ronstadt. Together they have played on close to 5,000 records, which says something about their talent and longevity. Next up was a group that surprised everyone last year when they backed up Ry Cooder. The Hamiltones now have their own band and are a Grammy nominated soul group from North Carolina. Keep your eye on these guys. MusicFest gets our nod for bringing them back this year.

Rain again for the evening performances sent some people home early, but this time, we were a bit better prepared.

MusicFest 2019 certainly brought together an amazing mix of music, and we can’t wait for next year. Congrats to the organizers!! See you in 2020. For more information see: www.islandmusicfest.com.

Keith and Heather Nicol blog about travel, mostly involving outdoor activities like hiking,sea kayaking, cross country skiing, alpine skiing and other activities. They also enjoy traditional music and cultures. They have written over 800 articles in various magazines and newspapers and are frequent contributors to Ski Trax and Saltscapes Magazines. Keith Nicol has also written two books and has a popular you tube channel http://www.youtube.com/user/k2nicol