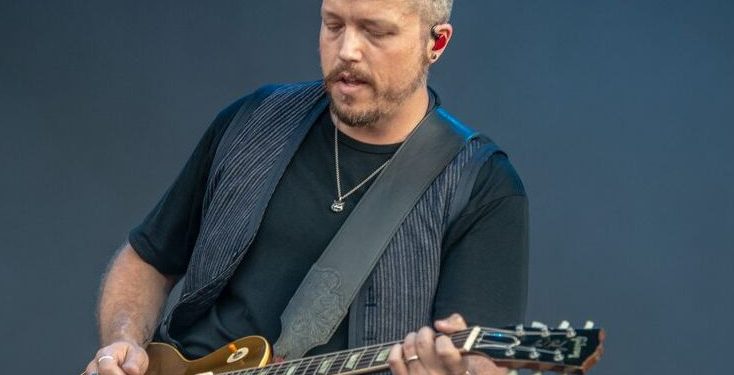 I was back to Bluesfest on July 5, and the weather was still unsettled.  As evening approached, so did a severe storm.  The festival was already looking at one cancellation: Colter Wall due to travel complications, and now additional shows were going to have to be cancelled due to heavy rain and a lightning storm

But the rain gave way to sunshine and a rainbow just as Alabama born singer songwriter Jason Isbell got set to take the stage.  If you’re a folk fan and haven’t heard of Isbell this is a guy who’s music you may appreciate. 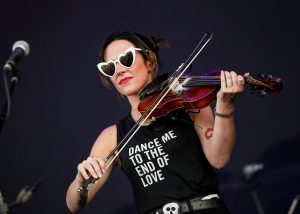 Jason brought his edgy Americana style to the mainstage. From song one, “Hope The High Road,” Jason was telling his story, his politics, his way.

He was joined by his band, The 400 Unit.  Jason’s partner Amanda Shires, a wonderful fiddler decked out in heart-shaped shades to go with Jason’s red black and green sneakers, kept the show playful.  The rest of the team – Sadler Vaden on electric guitar, Chad Gamble on the skins, Jimbo Hart on bass and Derry DeBorja on keyboards – was in top form.

Early on, he played a song he wrote for his old band, the Drive-by Truckers, introducing history and his southern rock roots with “God Damn Lonely Life.”

Jason’s music is a beautiful fusion of thoughtful songs that evoke images of American small town lives while asking those big questions. Like little short films, the songs step us through these little vignettes with big messages.

Guitar after guitar graced the stage during the set. The Drive by Truckers influence remains!

His music always seems to find itself between a rock and a country place. The next song he introduced was a song he wrote for Bradley Cooper for the film “A Star is Born” called “Isn’t It Time To Let The Old Ways Die” – a good question. 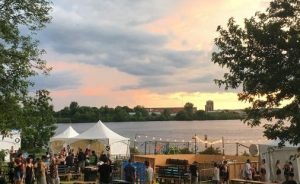 Sunsets at Bluesfest on the Ottawa River. Photo by Christophe Elie

Jason finished strong with he and Sadler in a good old riff off.  Two guitarists, nose to nose, axe to axe, giving it all they got.

He was gracious and appreciative of a stormy night that turned in his favour, and so were we.

Local DJ Rise Ashen was holding it down at the spin stage.  Rise Ashen is a true talent behind the turntable. Folk fans may recognize this artist, but if not, keep a look out for him. 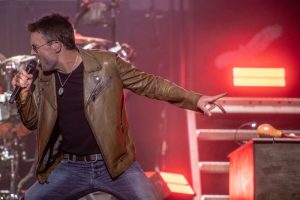 Bluesfest takes place right by the Ottawa River, and there are a few semi secluded spots by the water, like the Spin Stage and Videotron Stage, that can make you forget you’re still in the heart of the city.

Eric Church arrived on the mainstage to much fanfare.  His audience was out, singing along to his country songs.  It is truly a craft to construct songs people know before you play them, and he seemed to have that going for him.

It was a truly great evening of music.

And there was so much more to come!