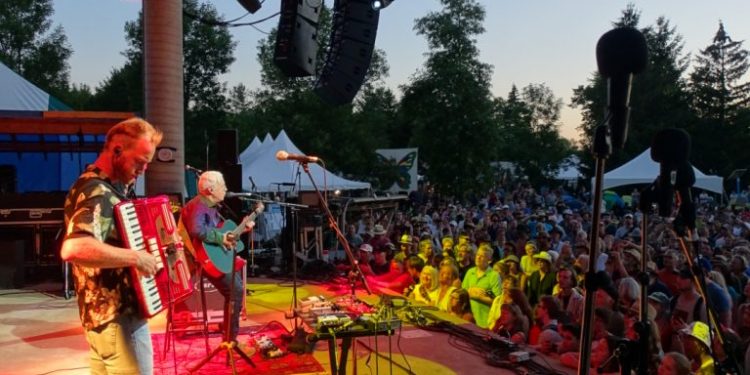 The final day of the 36th annual Hillside Festival was the day my wife and I had been looking forward to all weekend. The lineup for Hillside’s Sunday schedule was essentially the soundtrack to our close to 30-year relationship. We just couldn’t believe we’d get to see Scott Merritt, Skydiggers, Paul Langlois of the Tragically Hip and Bruce Cockburn all on the same day!

Once again, we loaded up our wagon and, under clear skies, we walked from our campsite to the Gate Tent to take in the Sunday Gospel Session at the Island Stage scheduled to start at 10:20 a.m. However, while walking along Anticipation Alley, we heard what sounded like Bruce Cockburn’s “Night Train” in the distance, and we just knew it wasn’t a recording. Our pace immediately quickened as we followed the sound of Bruce’s clear vocals and distinctive guitar to the mainstage, where he and his band, Gary Craig, Johnny Dymond, and John Aaron Cockburn, were completing a soundcheck for his evening performance. We couldn’t believe how lucky we were to have another opportunity to see Bruce perform that day.  Bruce followed up “Night Train” with “Jesus Train” and “Cafe Society”. After his soundcheck, he was gracious enough to sign my vinyl copy of Inner City Front that I’d brought with me hoping to get an autograph. It was one of those spontaneous and magical moments that can happen at a festival.

By the time we reached the Island Stage for the Sunday Gospel Session the tent was filled to capacity as people sought shelter from the already hot sun. We stuck around for a bit but decided to head over to the Lake Stage to get a good seat inside the tent for the We the North workshop. That’s what happens when huge fans of Bruce Cockburn stumble across him soundchecking on another stage. 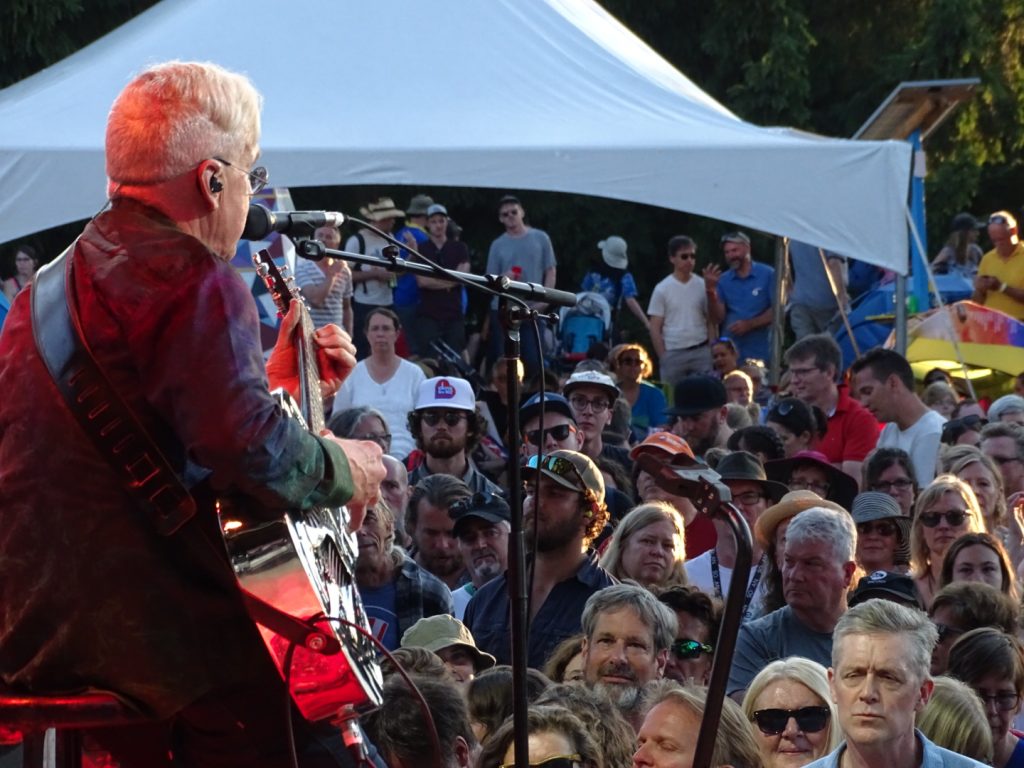 We arrived at the Lake Stage in time to catch the I Must Be An Acrobat workshop featuring Hymns57, Joyful Joyful, and Ellis’ Linnea Siggelkow. It was essentially a drone music workshop, and as we were completely unfamiliar with the genre, we found it to be surprisingly interesting. Joyful Joyful’s Cormac Culkeen did an excellent job leading the workshop and had us all participating and harmonizing our drone sounds.

At 12:10 p.m. the We the North workshop featuring Andy Maize and Josh Finlayson of Skydiggers, Paul Langlois of the Tragically Hip and Wild Rivers began. We were glad we’d arrived early to secure good seating upfront as the tent filled up quickly for what we’d expected to be a popular performance. We’d never seen Paul Langlois perform outside The Tragically Hip so we eagerly anticipated his contribution to the workshop. He performed two of his songs, “Broken Road” and Not Guilty,” and we loved them both. Paul also covered one of Gord Downie’s songs from his solo projects. The combination of Paul Langlois and Skydiggers was fantastic, and you could tell that everyone on stage was really enjoying the experience. Hopefully, they continue to perform together as I’d highly recommend seeing them live. 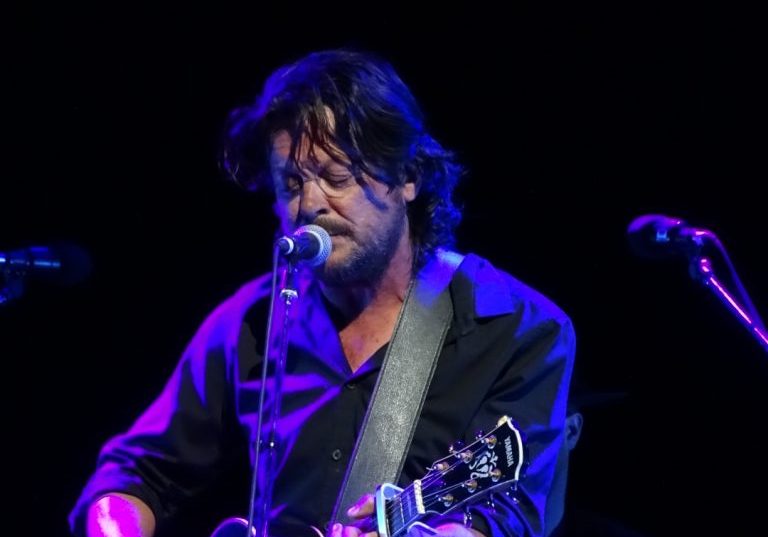 The most important reason we arrived so early to the Lake Stage was that our favourite artist, Bruce Cockburn, was participating in the My Heart Is Where It’s Always Been workshop alongside Scott Merritt and Jenn Grant.  We’d seen Bruce a number of times but never at a festival and never in a workshop. It was amazing! Bruce was sporting some cool shades and sounded even better than ever. We were also thrilled to see Scott Merritt live for the very first time. We’d been introduced to his music by a high school art teacher nearly three decades earlier. To our surprise, Ms. Detweiller, who is now Mrs. Merritt, was actually in attendance, and we were able to say a quick hello. Scott sounded exactly like he does on his albums, four of which we have in our record collection that I conveniently left behind at our trailer, missing an opportunity to get them autographed. Jenn Grant was simply perfect – perfect pitch and effortless vocals. The workshop made us even more eager to see her and Bruce on the mainstage that evening.

Next up on the Lake Stage was Harrow Fair, the dynamic duo comprised of Miranda Mulholland and Andrew Penner.  We’re big fans of the group, having seen them at the Kingsville Folk Music Festival in 2017 then again at a venue in Guelph. The duo debuted two new songs from their upcoming album, which both sounded wicked.  They also performed a rendition of Chris Isaak’s “Wicked Game” and totally made it their own.  Harrow Fair always brings their “A” game and puts in 100 per cent effort with every performance Their mixture of sweet and sour sounds resulted in a sweaty, raucous and totally crowd-pleasing set. It was hot under that tent, and it wasn’t just because of the sun. 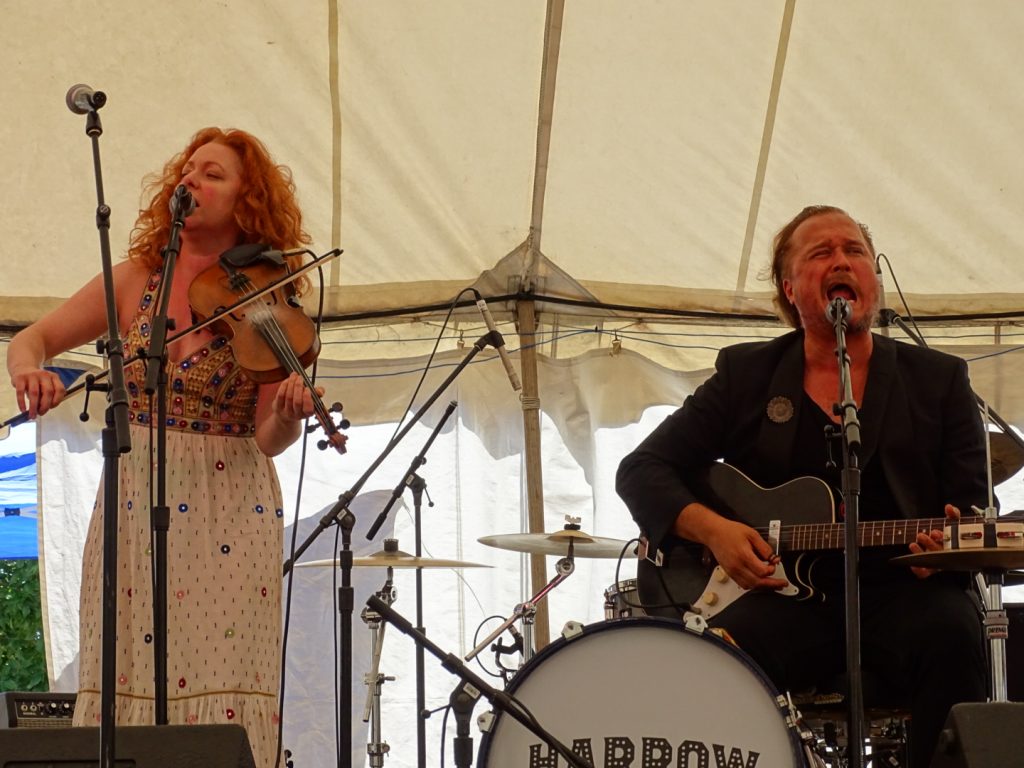 After Harrow Fair’s blistering performance we popped by the mainstage to catch more of Wild Rivers, this time with full band. The group had people up dancing despite the heat from the late afternoon sun.

At 4:25 p.m., Valerie Ekoume and her band took the mainstage and kept the dancers going with her Afropop grooves.

We needed a break from the sun, so we strolled over to the Island Stage to catch some of Foxwarren’s set. Hailing from Regina and fronted by Andy Shauf, their melodic indie rock sound easily permeated a completely packed tent and beyond.

Altin Gun was up next at the Island Stage. The crowd absolutely loved their Turkish vocals and dancy vibe. The band would’ve been perfect for the mainstage.

At 6:15 p.m., we were back at the mainstage to see Jenn Grant with her full band featuring her husband, producer and singer-songwriter Daniel Ledwell.  While I’d been fortunate enough to see Jenn once before, my wife had not, and we were both eager to see her perform. Jenn has such a clear and crisp sound, and her vocals seemed to lure people toward the front of the stage. She performed several songs from her latest album, Love Inevitable, as well as recognizable hits from earlier albums such as Compostela. 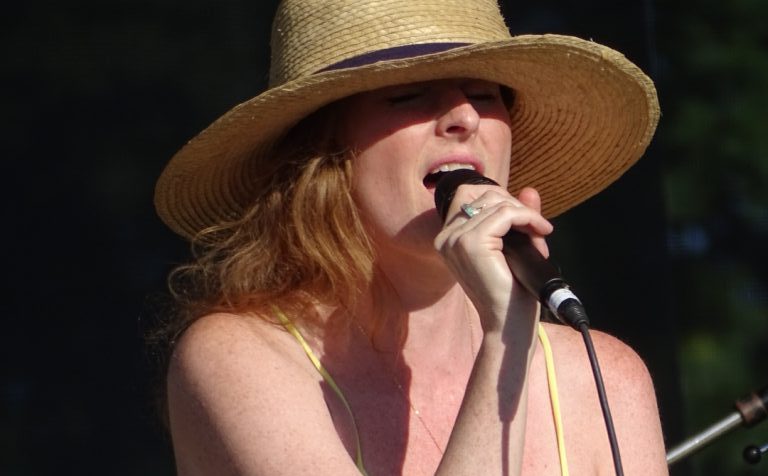 Then it was time for the performance my wife and I had been looking forward to all weekend. Bruce Cockburn took the stage at 7:45 p.m., and fans rushed to the front of the stage and started enthusiastically singing along as soon as Bruce sang the very first line of his opening song, my personal favourite, “Lovers In A Dangerous Time.” I couldn’t believe it! Bruce sounds better every time I see him, and his hour-and-a-half set seemed to fly by. It was an absolute thrill to see him perform old songs and new as the rays from a stunning sunset advanced on the mainstage like a bloody sword. Bruce is a national treasure and a completely underrated guitarist by anyone that doesn’t know anything about guitars. His right hand is a one-man band, but on this night, he was accompanied by his nephew, John Aaron Cockburn on accordion, guitar and violin; Johnny Dymond on bass; and the always smiling Gary Craig behind an indescribable drum kit. The show was total perfection. Hillside could’ve ended right after Bruce’s set, and I would’ve been completely satisfied, but what came next took the day to a whole other level!

The last mainstage act of the festival was Skydiggers featuring Paul Langlois of the Tragically Hip. Skydiggers were on fire, especially Andy Maize and his sweet dance moves. One might’ve expected Skydiggers to perform their own songs then backup Paul on his songs and maybe something by The Hip. However, after a few of their hits, Skydiggers called Paul up on stage, and they easily melded into a new supergroup performing songs by Skydiggers, Hip and Paul Langlois. Paul sounded even better than during the earlier workshop. He once again performed his songs “Broken Road” and “Not Guilty” along with “Love Over Money” from Gord Downie’s final solo album, Introduce Yerself. Andy took lead vocals on the Tragically Hip’s “Nautical Disaster,” which was amazing because I’d decided to wear my badly-faded and well-worn Day For Night concert shirt that day.  Then Paul explained that he’d only performed the next song one other time since the Tragically Hip. With the first note, the crowd went crazy as the unofficial Canadian anthem that is “Bobcaygeon” filled the night sky and constellations revealed themselves one star at a time.  They also performed an awesome version of “Wheat Kings.” The show and the festival ended with Skydiggers and Paul Langlois nearly drowned out as the crowd joined in on the Traveling Wilburys’ “End of the Line”.

While we eagerly anticipated returning to the Hillside Festival, we were conscious that nothing could compare to that first time. Needless to say, any concerns we had quickly vanished within a few minutes of walking into the festival. It remains our favourite music festival, and we cannot wait until next year.

We sure did have a happy Hillside!